– The US-China trade war will be blamed for the continued slowdown in the Chinese economy, even as the government guides growth to its weakest rate since 1990.

– Retail tradersare starting to fade gains by AUDJPY and NZDJPY, suggesting that China-linked currency crosses may continue to gain ground in the week ahead.

According to a Bloomberg News survey, the Chinese economy is due to have grown by 6.3% annualized in the first quarter, a slight decline from the 6.4% annualized rate in Q4’18. The Chinese economy, according to Chinese Premier Li Keqiang, is set to grow at a pace of 6% to 6.5% in 2019, a slower than the 6.5% growth target in 2018. As the Chinese government ‘guides’ growth rates lower as the economy matures, one can’t dismiss the fact that growth readings are the lowest in three decades.

It’s also important to view the data through the lens of the US-China trade war. The Chinese economy is managed by the central government, and therefore, the targeted rates of decelerated growth are, in a sense, intentional. Unintentional negative consequences on growth can be ‘explained away’ by the US-China trade war tensions. At least that will be the view portrayed by Chinese government officials. Traders may find that FX markets prove more reactive around US-China trade war news than around the Q1’19 Chinese GDP report. 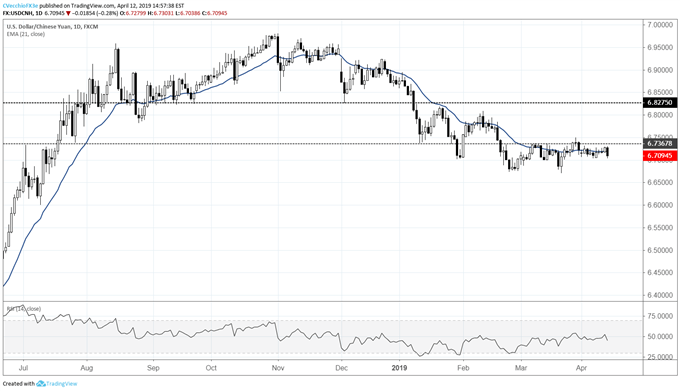 USDCNH has been a dull currency pair over the past several months. The Chinese government has exerted more control over Yuan settlement rates as the US-China trade war has raged, in effect, allowing the Chinese Yuan to weaken to offset the negative impacts of the dispute (read our notes from July 2018, US-China Trade War Enters New Phase amid Yuan Depreciation and August 2018, USDCNH Appreciation Not a Problem for China, Reserves Figures Show.)

That USDCNH depreciated steadily from November 2018 through February 2019 was a sign that the trade talks were nearing resolution suggests that traders may be wise to take the last six-weeks of sideways price action as an indication that not much progress has been made.