The Australian Dollar has experienced quite a bit of weakness since the start of May as an escalating US China trade war and mounting RBA rate cut bets have weighed negatively on the currency. In fact, overnight swaps have priced an increasingly greater probability that the RBA lowers its policy interest rate at its June 4 meeting with the odds climbing from 23.8 percent on May 7 to 99.1 percent today. Expectations for the RBA to ease policy once again jumped following the April RBA minutes release, which hinted that the central bank would likely cut rates if “inflation did not move any higher and unemployment trended up.” 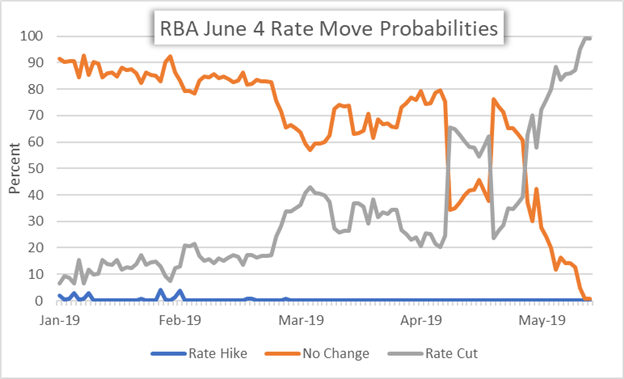 Recent downside in AUDUSD has ebbed, however, as bullish prospects stemming from PM Scott Morrison’s unexpected victory in the Australia’s federal election helped boost the Aussie. Yet, economic data has revealed a somewhat mixed picture and begs to question whether or not Governor Lowe will defer to a continuation of the patient approach implemented by the RBA and leave rates unchanged for the 31st consecutive meeting.

Construction in Australia, which comprises roughly 9 percent of the country’s GDP, has shown signs of weakness with persistently bleak building approvals data. Although, CBA manufacturing and services PMI readings for the month of May showed signs of improvement with the metrics rebounding 0.2 and 2.2 percentage points respectively. Consumer inflation expectations dipped further to 3.3 percent annualized rate in May which is down noticeably from the 3.9 percent reading the period prior. Moreover, an inspiring surprise in Aussie employment change of 28.4K net additions versus estimates of 15K was countered by an unexpected uptick in the unemployment rate from 5.0 percent to 5.2 percent. 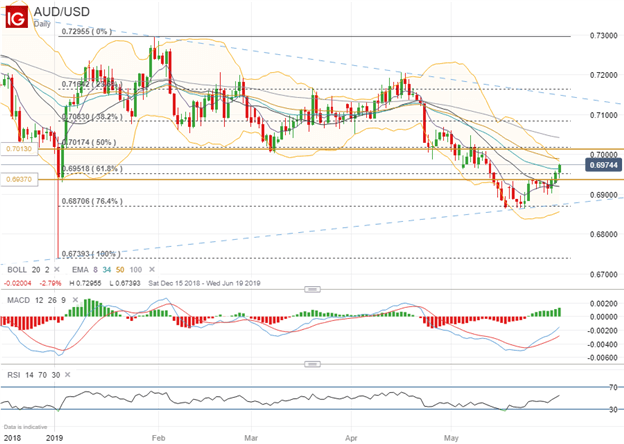 AUDUSD is estimated to trade between 0.6937 and 0.7013 with a 68 percent statistical probability as calculated from its overnight implied volatility reading of 10.42 percent priced by forex options traders. Upside in the currency pair over the last few sessions has been primarily driven by broad-based weakness in the US Dollar as rate traders downplay the prospect that the Federal Reserve will remain sidelined and keep rates on hold. With spot rates trading back above the 61.8 percent Fibonacci retracement line drawn from its year-to-date high and low, AUDUSD could target the 0.7000 handle where prices may face the next level of technical resistance.

In the event that the RBA surprises markets and leaves rates unchanged, the Aussie could easily leap higher and find footing above this level. But, with markets already pricing in a near-certain cut by the RBA, AUDUSD traders will likely look for the currency pair to hold the 61.8 percent Fib following a reduction in the central bank’s policy interest rate on Tuesday. However, if follow up commentary from Governor Lowe paints a downbeat picture tomorrow in response to the recent deterioration in US China trade relations, AUDUSD could still swoon lower.