The Australian Dollar heads into a new week with little sign of respite for its battered bulls.

The currency flirts with three-year lows against its big US brother thanks to a combination of risk factors both foreign and domestic, with a ten-year trough in sight if they give way.

The apparently ever-increasing heat of US-China trade war has taken as much out of the Australian Dollar as just about any other currency. This is understandable as the Aussie is both a general pro-growth play and, sometimes, a proxy for Chinese economic activity.

More specifically and domestically, Australian ten-year bond yields sank to new record lows last week as risk-appetite wilted and markets moved to price in a cut to the record-low 1.50% Australian Official Cash Rate between now and August. At present rate futures assign a better than 60% chance that rates will go lower next month, but an August move is now fully priced.

Some worrying details in the last labor-market report made a cut far more likely as far as markets were concerned. Job creation continued to expand in April, but full-time hiring fell, and the unemployment rate ticked upward. Given the Reserve Bank of Australia’s heavy emphasis on labor’s fortunes when setting monetary policy, it’s hardly surprising that disappointment here should weigh heavily on the currency.

It’s very hard to confidently predict any change in the Australian Dollar’s fortunes this week. Investors will get a look at the minutes of the last RBA conclave, and they’ll also hear from Governor Philip Lowe. Both are coming up on Tuesday. Neither is obviously likely to help the currency much.

Thursday will bring Purchasing Managers Index figures but, again, it seems implausible that these can turn sentiment around.

What might of course is some general revival in risk appetite linked to the trade story but that, as ever, is impossible to foresee. Based on what can be known, it’s got to be another bearish call for AUD/USD this week. 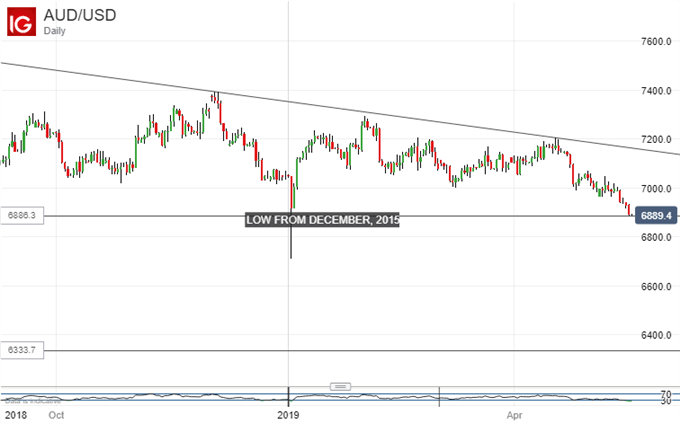