The S&P 500 could face trouble in the weeks ahead if US regulators look to pursue tighter restrictions on some of the tech industry’s biggest names. Support for regulatory action first gained steam last September when state attorneys met to discuss suspicions that conservative views were being suppressed on certain online platforms. In the discussions, officials argued the alleged issue was emblematic of a larger one, namely big-tech’s market power and handling of personal data, issues they could look to combat through aggressive antitrust action.

The companies most at risk – Alphabet’s Google and Facebook – have drawn criticism from both sides of the aisle. Democratic Senator Elizabeth Warren was recently supported by Republican Senator Ted Cruz upon the announcement of a sweeping legislative regulatory plan that will explore the idea of regulating big-tech companies as public utilities.

A similar idea was originally put forth by Stephen Bannon, President Trump’s former Chief Strategist. The rare bipartisan agreement could see legal action gain pace, particularly as politicians look to garner public support into election season. Such an outcome could pose a significant threat to Google and Facebook, two members of the FAANG group. 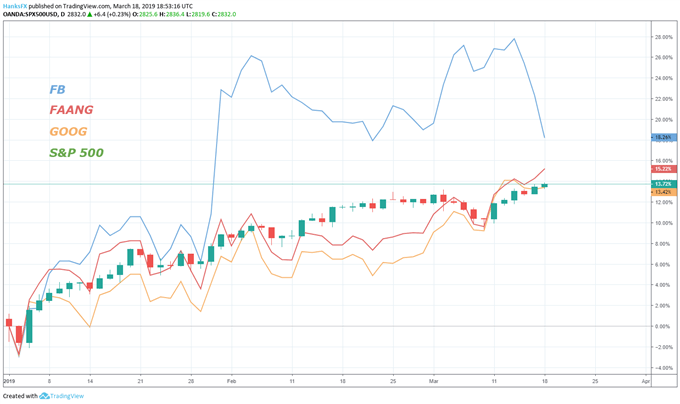 The group of tech stocks has offered robust returns for the year-to-date as tech tries to recapture its former glory from mid-2018. At present, FAANG has returned roughly 15% in comparison to the S&P 500 which has climbed nearly 14% in the same span. Despite a disastrous performance last week, Facebook remains a pillar of strength in the group with an 18% return YTD.

Although the threat of antitrust action amounts to a significant risk for the tech-sector, adverse price action from the risk appears muted thus far. However, the threat could be weighing on a more determined drive higher, particularly for Facebook and Google.

Given the nature of Washington and lobbying power of the industry, the threat looks to remain an ancillary risk for the time being. That said, state attorneys will meet on March 26th at the American Bar Association’s spring meeting on antitrust. The FTC will also meet that week for a two-day hearing which has technological change, privacy and competition scheduled as major topics according to Bloomberg.

Together, the meetings could see regulators find actionable steps forward but immediate price action for the S&P 500 will arise from Wednesday’s FOMC rate decision. For live coverage of the rate decision, join John Kicklighter on Wednesday at 1:45 EST.