Oil extends the advance from the previous week even as the Organization of the Petroleum Exporting Countries (OPEC) unexpectedly cancel its next meeting schedule for April 17-18, and recent price action raises the risk for a further advance as the Relative Strength Index (RSI) flirts with overbought territory. 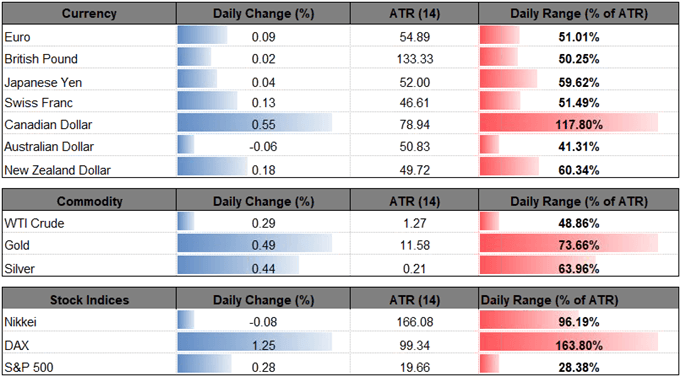 Oil climbs to a fresh yearly-high ($59.57)as OPEC’s Joint Ministerial Monitoring Committee (JMMC) announces its ‘recommendation to forego the full Ministerial Meeting in April and instead schedule a JMMC meeting in May ahead of the OPEC Conference meeting on 25 June,’ and it seems as though the group will continue to carry out its rebalancing efforts over the coming months as Secretary GeneralMohammad Barkindo states that ‘the ‘Declaration of Cooperation’ has ushered in a new, successful chapter in the long history of oil.’

The current environment may continue to benefit oil prices as OPEC’s latest Monthly Oil Market Report (MOMR) forecasts ‘world oil demand is forecast to grow by 1.24 mb/d, unchanged from last month’s projections,’ but it remains to be seen if the OPEC+ alliance will be extended beyond the six-month agreement as Russia Energy Minister, Alexander Novak, pledges to make a decision in May or June.

With that said, developments coming out of the United States may also influence the market as Crude Inventories are projected to increase 2000K after unexpectedly contracting 3862K in the week ending March 8, but another decline in the energy stockpiles is likely to boost the price of oil as the development points to stable demand.

Moreover, the previous updates from the U.S. Energy Information (EIA) also revealed weekly field production of crude narrowing to 12,000 b/d from a record 12,100 b/d in the week ending March 1, and a further slowdown in non-OPEC output may fuel the advance from the monthly-low ($54.52) as OPEC and its allies continue to regulate supply. In turn, topside targets remain on the radar for crude, with recent price action raising the risk for a further advance as oil initiates another series of higher highs & lows, while the Relative Strength Index (RSI) flirts with overbought territory. Sign up and join DailyFX Currency Analyst David Song LIVE for an opportunity to discuss potential trade setups. 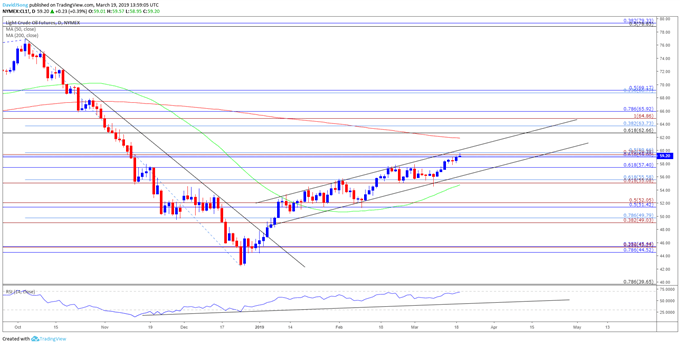