As anticipated, the Fed held its benchmark rate. As such, the decision resulted in a relatively muted market response. However, the subsequent commentary from Chairman Jerome Powell jolted markets. The neutrality of his comments surprised investors because it was comparatively less dovish than what they had originally priced in.

Powell expressed confidence in the fundamental outlook that he believes will continue to support the economy, with the current trajectory suggesting that it is on a healthy path. He also mentioned that risks – such as the possibility of a hard Brexit, trade wars and concerns about the resilience of the financial system – have moderated. However, he also noted that core inflation has been weaker than expected.

If the US-China trade conflict is resolved, it could lift consumption and inflation with the by-product being a uptick in activity in factories – an anticipated crucial contributor to growth according to Powell. This is why watching for tomorrow’s US factory orders could now carry greater weight and may therefore warrant the attention of traders.

But what appears to have put the nail in the coffin in regard to the Chairman’s neutral stance was when he said that he does not see a strong case for a rate move in either direction. This position is to a certain degree a continuation of the patient wait-and-see mode approach the Fed has taken ever since the outlook became progressively cloudier from the end of 2018 and into the new year.

Consequently, Powell’s less-than-dovish outlook sent the US Dollar and its cross with the Swedish Krona and Norwegian Krone higher along with two-year government bond yields while S&P 500 futures plummeted. The fall in equities may be from Powell’s confidence in the underlying strength of US economic activity, which lends credence to the notion the economy may be able to endure a rate hike in the future.

Tomorrow, both Swedish and Norwegian manufacturing PMI data will be published anticipations of 52.8 and 56.8, respectively. In the Riksdag, Riksbank officials including Governor Stefan Ingves will be answering questions in a parliamentary hearing. There may not be any new information that would deviate from his previous message after last month’s rate decision and commentary.

PMI out of Sweden and Norway may also give insight into Nordic producers’ outlook for European growth. With between 70-80 percent of exports destined for Europe, employers have to adjust their output in accordance to anticipated demand from their biggest trading partner. To learn more about the unique political economy of EU-Nordic relations, you may follow me on Twitter @Zabelin.Dimitri. 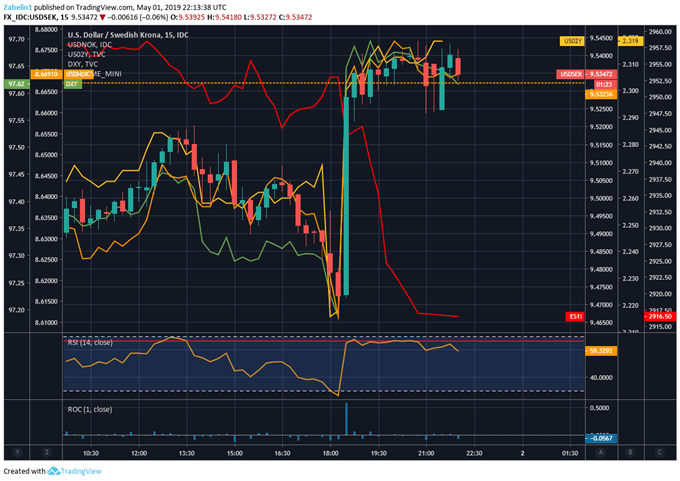