Asia Pacific benchmark stock indexes traded cautiously higher in early Friday trade, though follow-through seemed to be lacking after initial gains. While the Nikkei 225 aimed about 0.70% to the upside heading into Tokyo close, it spent most of its day trading sideways. A similar performance was also seen in the ASX 200.

Chinese equities rallied the furthest, with the Shanghai Composite up over 2 percent. In Beijing, US Treasury Secretary Steven Mnuchin said that he had a ‘very productive’ dinner with officials ahead of the next phase of US-China trade talks.

Ahead, markets eye a data-packed ending to the week. Items such as Canadian GDP and US PCE core (the Fed’s preferred measure of inflation) are on the docket. The former may outperform, as data has been tending to in the nation. This may offer a lift for the Canadian Dollar.

Using futures to show afterhours trade, the Nikkei 225 remains wedged in-between a falling trend line from early March and a range of support above 20680. The former seems to be guiding it lower, but a breakout in either direction seems to be approaching soon. 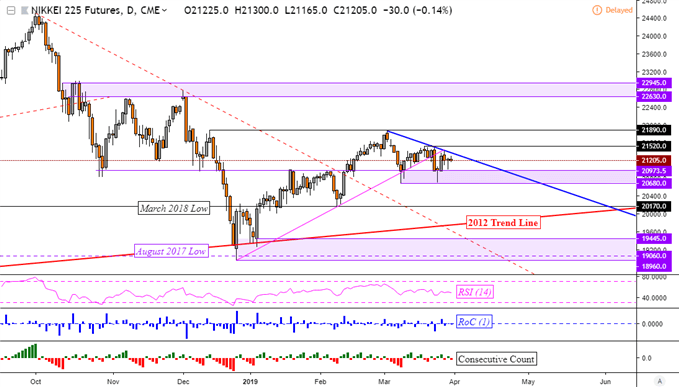