The DailyFX Q2 2019 Forecasts are now available to download including our forecasts for GBP and EUR.

EURGBP continues to struggle to make any headway despite a lack of any real progress in the fractious Brexit negotiations. Sterling remains under a cloud with little expected to happen until Brexit negotiations are complete, while the Euro is facing its own battles as its economy continues to slow and price pressures continue to ease. As a pair EURGBP have moved lower since the start of the year and touched 0.8472, a low last seen in My 2017. Subsequent rebounds have been short-lived and offered an opportunity to open fresh short-positions. The ECB are likely to keep monetary policy looser for longer to boost inflation and growth, while a successful Brexit resolution will see the Bank of England look at hiking interest rates at the end of the year if the UK jobs and wages market continue to grow.

The latest daily chart shows the downtrend from the January 2 high print at 0.9116 remains intact while a secondary trend lower from the March 21 swing-high at 0.8723 also remains in place. EURGBP currently trade around 0.85750 and if trend resistance is broken will run into further resistance at 0.8624, the 23.6% Fibonacci resistance, just ahead of the 5-day moving average at 0.8628. If these levels are broken and closed above, EURGBP may struggle to break through the 50% Fib level at 0.8718 and the March 21 high at 0.8723.

While EURGBP looks set to trade with a negative bias going forward, a no deal Brexit would change the outlook against Sterling sharply and is a risk that traders should price in to any Sterling set-up. 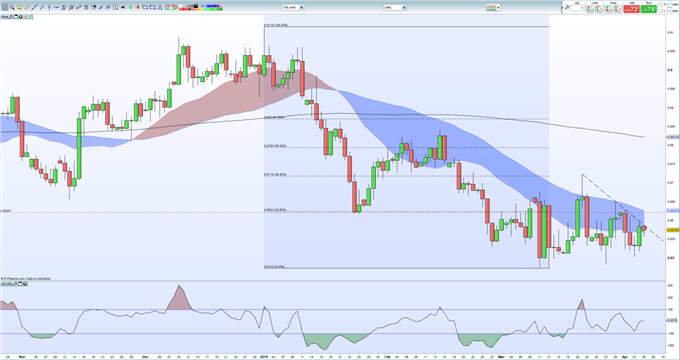 IG Client Sentiment Datashows how retail investors are positioned in a range of currencies and asset markets and how daily and weekly positional changes shift sentiment.

What is your view on EURGBP – bullish or bearish?? You can let us know via the form at the end of this piece or you can contact the author at nicholas.cawley@ig.comor via Twitter @nickcawley1.