Trade all the major global economic data live as it populates in the economic calendar and follow live coverage for key events listed in the DailyFX Webinars. We’d love to have you along.

Last week, the Malaysian Ringgit was facing a potential turning point as the dominant uptrend from March faced resistance with a bearish warning sign. In the end, 4.1855 was cleared and USD/MYR finds itself facing a similar predicament as it eyes the highs pulled off in November 2018. This places resistance at a range between 4.1950 and 4.2000 as the rising trend line from April (red line below) guides the pair higher.

If broken, this will open the door to facing the next psychological barrier at 4.2090 which was an area of support in September and October 2017. Should that be cleared as well, we may aim for October 2017 highs at 4.2425. But, keep a close eye on the negative RSI divergence which is showing fading upside momentum. A turn lower places support at 4.1800 before exposing a potential rising trend line from March (pink line). 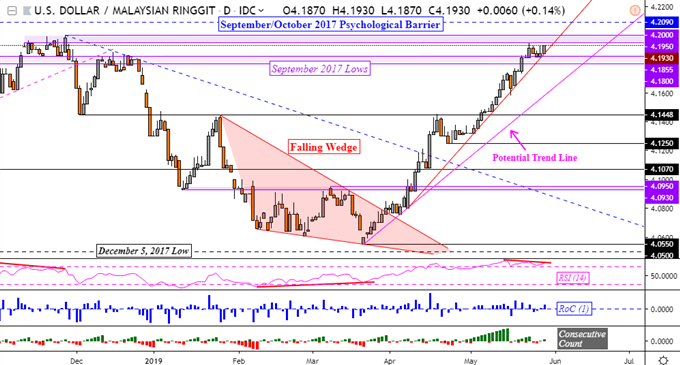 The Singapore Dollar also remains in a similar situation as the Malaysian Ringgit. Last week, it seemed to follow-through on bearish reversal warnings after a Shooting Star, a sign of indecision, preceded the drop under the near-term rising support line from May 13. However, the decline paused on near-term support at 1.3749 as USD/SGD turned higher. This may overturn the warning offered by the Shooting Star candle.

Yet, like in USD/MYR, negative RSI divergence is still persisting and showing fading upside momentum. This may translate into another retest of support at 1.3749 which if broken, exposes the rising support line from late April. Otherwise, resuming its climb opens the door to facing August 2018 highs at 1.3819 before eyeing July 2017 highs at 1.3863. 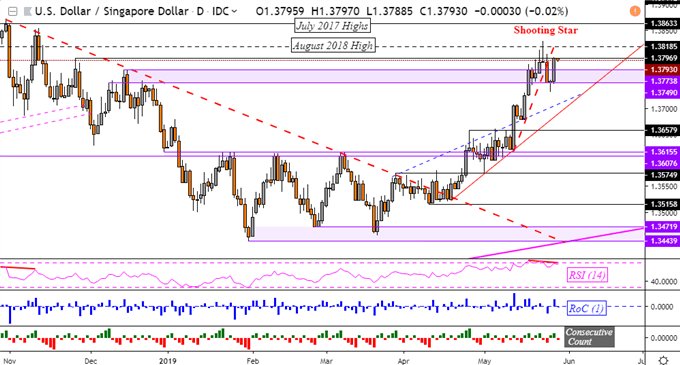 Meanwhile, the Indonesian Rupiah appears to be wobbling against the US Dollar. The currency is being pushed and pulled between intervention from the Bank of Indonesia while risk aversion appears to be benefiting the Greenback as of late. Hence, USD/IDR falling under the rising trend line from April has been met with a volatile and sporadic performance.

This leaves near-term support at 14340, which acted as a psychological barrier in December and then again in March. If taken out, this may open the door to testing 14255 thereafter. Otherwise, retesting resistance at 14482 is standing between it and the highs in December around 14646. To stay updated on ASEAN FX technical and fundamentals, you may follow me on Twitter here @ddubrovskyFX. 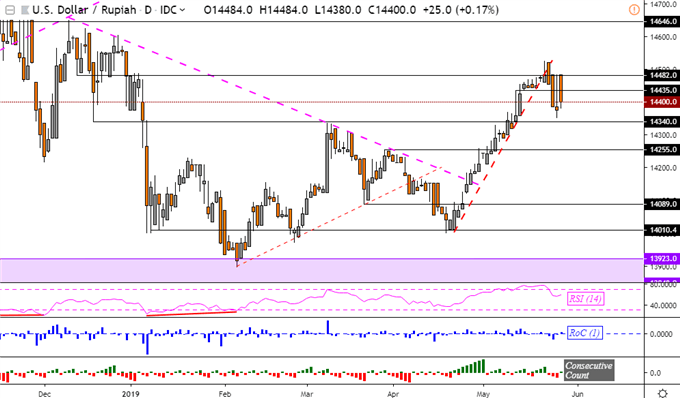 The Philippine Peso also followed a similar path as the Indonesian Rupiah, clearing a near-term rising trend line from May. Since then, USD/PHP fell to retest 52.12, as expected, with the barrier holding and preceding a rise to resistance at 52.37. If the break under the rising trend line defines the path for USD/PHP ahead, we may get another retest of 52.12. If that is taken out, the next area of support seems to be around 51.69. 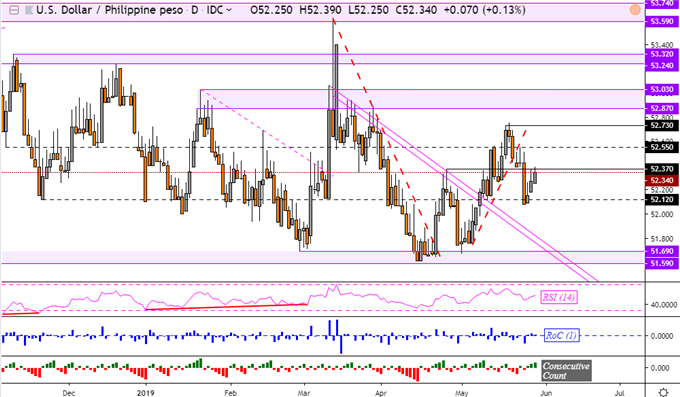