Updates to Australia’s Consumer Price Index (CPI) may fuel the recent decline in the AUD/USD exchange rate as the headline reading for inflation is expected to narrow to 1.5% from 1.8% per annum in the fourth-quarter of 2018.

Signs of slowing price growth may spur a bearish reaction in the Australian dollar as it puts pressure on the Reserve Bank of Australia (RBA) to further insulate the economy, and the central bank may adopt a more dovish tone over the coming months as ‘growth in household consumption is being affected by theprotracted period of weakness in real household disposable income and the adjustment in housing markets.’

In turn, a print of 1.5% or lower may drag on AUD/USD as it encourages Governor Philip Lowe & Co. to adjust the forward-guidance for monetary policy, but an above-forecast CPI reading may curb the recent weakness in the Australian dollar as it dampens bets for an RBA rate-cut. Sign up and join DailyFX Currency Analyst David Song LIVE for an opportunity to discuss potential trade setups.

Australia’s Consumer Price Index (CPI) narrowed less-than-expected during the last three-months of 2018, with the index slipping to 1.8% per annum from 1.9% per annum in the third-quarter, while the core rate of inflation held steady at 1.8% for the seventh consecutive quarter. A deeper look at the report showed 12 of 15 components reflecting a slowdown year-over-year, with the gauge for tradeable goods slipping to 0.6% from 1.4% in the third-quarter, while the gauge for non-tradable inflation climbed to 2.4% from 2.2% during the same period.

The Australian dollar gained ground following the above-forecast CPI print, with AUD/USD clearing the 0.7200 handle to close the day at 0.7247. Learn more with the DailyFX Advanced Guide for Trading the News. 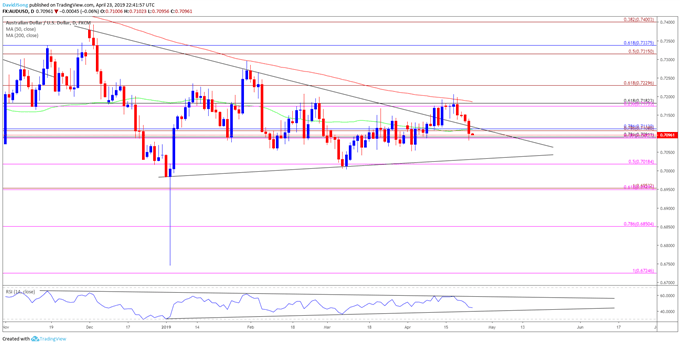