Updates to New Zealand’s Gross Domestic Product (GDP) report may rattle the NZD/USD rally following the Federal Reserve meeting as the growth rate is expected to narrow to 2.5% from 2.6% per annum in the third-quarter of 2018.

Another downtick in the GDP print may produce headwinds for the New Zealand dollar as it warns of a slowing economy, and a dismal development may push the Reserve Bank of New Zealand (RBNZ) to alter the forward-guidance as the central bank warns ‘trading-partner growth is expected to further moderate in 2019.’

Even though the official cash rate (OCR) sits at the record-low of 1.75%, the weakening outlook for economic activity may encourage the RBNZ to further insulate the economy as the central bank asserts that ‘the direction of our next OCR move could be up or down.’ In turn, a GDP print of 2.5% or lower may spark a bearish reaction in NZD/USD, but a positive development may fuel the advance following the Federal Reserve meeting as it curbs bets for an RBNZ rate-cut. Sign up and join DailyFX Currency Analyst David Song LIVE for an opportunity to discuss potential trade setups.

New Zealand’s Gross Domestic Product (GDP) report showed the growth rate increasing 2.6% after expanding a revised 3.2% in the second-quarter of 2018. A deeper look at the report showed Mining as the biggest contributor to growth as the sector grew 12.4% in the third-quarter, with Wholesale Trade climbing 1.1.% during the same period, while Utilities suffered a 2.3% decline after rising 4.1% during the three-months through June.

The New Zealand dollar struggled to hold its ground following the below-forecast print, with NZD/USD pulling back from the 0.6800 handle to close the day at 0.6774. Learn more with the DailyFX Advanced Guide for Trading the News. 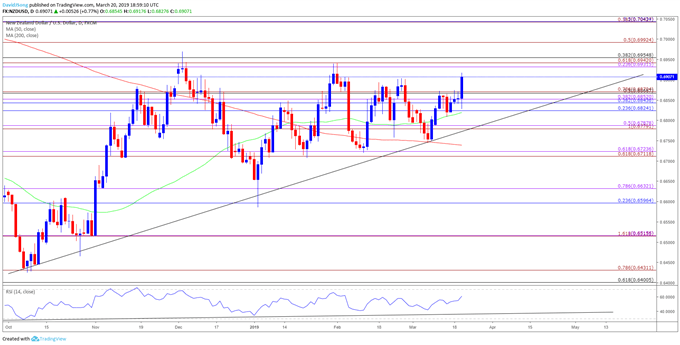