This past session offered a clear shift in both realized market activity and expected volatility – both would drop even further into extreme lows. There are still a host of systemically-important and unresolved fundamental issues lurking through the global markets, but the scheduled sparks to thrust these issues and their implications to the forefront have thinned out. The outlook for growth remains the most troubling and accessible threat to the future with the downgrade in 2019 GDP forecasts from the IMF and WTO still ringing in our ears while the former’s Global Financial Stability Report (GFSR) made clear that there were a host of threats that could suddenly unseat the world’s fragile sense of stability. Remarks from the White House’s chief economic advisor that President Trump could push forward with $125 billion in tax cuts with subsequent spending cuts doesn’t exactly earn the enthusiasm the first tax effort had. Perhaps US corporate earnings with JP Morgan and Wells Fargo figures will take the growth focus in a different direction – leveraged corporate profits.

For the other two common themes we’ve seen cycle through responsibility of the market’s primary trends – monetary policy and trade wars – the sentiment is wait-and-see. The Fed minutes, ECB’s decision and BOE Governor’s concerns are all on script and the market has little reason to test their concerns over what happens should another crisis find these authorities wanting. As for trade wars, the status of the US-Chinese negotiations and President Trump’s threats of $11 billion in tariffs on EU goods in retaliation for “illegal” subsidies for Airbus await fresh updates. The China trade balance figures Friday could spur some interest on this front however in certain areas – like AUDUSD.

A Historically Restricted Dollar Range and the Opportunities That Entails

With the fundamental engines cooling off, we naturally finding both implied (expected) and realized volatility are easing across the financial system. The S&P 500-based VIX volatility index is floundering at lows stretching back to early October before the fourth quarter swept through the markets. That has in turn seen the S&P 500 and Dow deflate 5-day (one trading week) average daily ranges to their lowest levels in a similar time span. That is proving frustrating for bulls who are trying to cover the final stretch of the first quarter recovery effort and return the indices back to record highs – less than 2 percent from Thursday’s close. Low volatility usually supports a speculative reach, but the threshold for speculative climb is not as low as it once was. For US indices, the proximity to record high increasingly reflects a record high cost to jump on board and there come serious questions as to how much return that will afford. Dividends certainly won’t compensate for that investment and capital gains (buy low, sell high) is cast in serious doubt after 2018’s fireworks. Meanwhile, rest of world equities (VEU) and emerging markets (EEM) are struggling to overtake the mid-point of their total losses this past year. This does not bode well for a return to the default advance alongside complacency upon which we depended for much of the performance between 2014 and 2017. 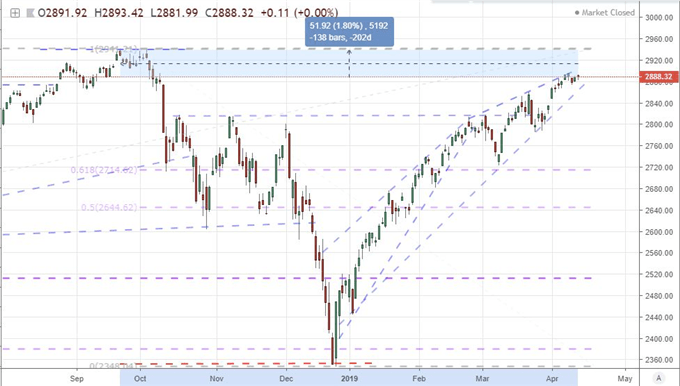 If you think the restrictions on equities is remarkable, consider the Dollar. There are obvious ranges in pairs like EURUSD, GBPUSD, USDJPY and AUDUSD. However, to give statistical context as to how restrictive these patterns are, I looked at the historical range of the trade-weighted DXY and my own equally-weighted Dollar Index with a rolling 200 trading day look back period (essentially one trading year). The DXY is carving out a range that has only been smaller in 2014 and 1996. In both instances, the ultimate normalizing from these extraordinarily restrictive periods was through extreme breakouts and impressive trends. As for the equally-weighted index, our current restraint is unprecedented – though it only goes back to the first trade of the Euro in 1999. Yet, considering the time frame we are evaluating this level of inactivity on is measured in weeks and months, it can take considerable time before we turn the corner. Until we do, range trading will be more appropriate. In the short-term, the University of Michigan consumer sentiment survey will navigate towards deeper fundamental tributaries; but its breakout capacity on a Friday will be very low. 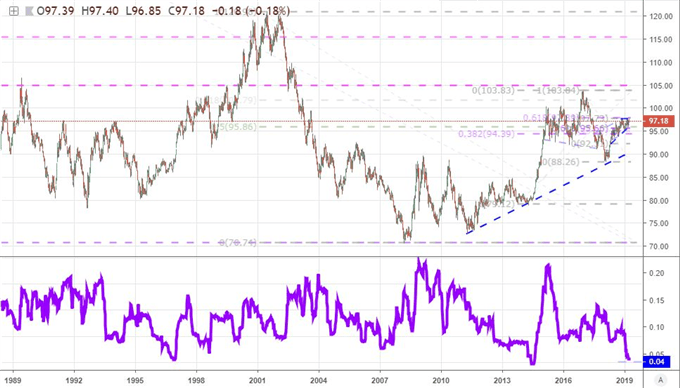 Outside of the Dollar’s gravity, the fundamental charge isn’t any greater for the majors. Previously, the British Pound was stuck in a definitive range but would also deal with the uncertainty of high volatility leveraged by the threat of Brexit headlines that could cross the wires at any time. As of Wednesday night, the European Union (EU-27) agreed to extend the divorce proceedings with the United Kingdom another six months through October 31st. That does little to ultimately break through the impasse, but it forestalls the threat of impending doom. We see that in the CBOE’s volatility index (a 30-day forecast period) which collapsed to its lowest level in the series’ short history. It is worth nothing the next closest trough historically was shortly after the actual Brexit vote in 2016. More time to make a decision can settle interim volatility. As we assess the fundamental situation over the coming months, IMF Director Lagarde warned that the delay would further hurt the UK economy and BOE Governor Carney didn’t seem any more confident over the conclusion of these uncertainties (his term ends after its extension in January 2020). Range conditions seem even more likely for the Sterling ahead, just with less exposure to extreme volatility. 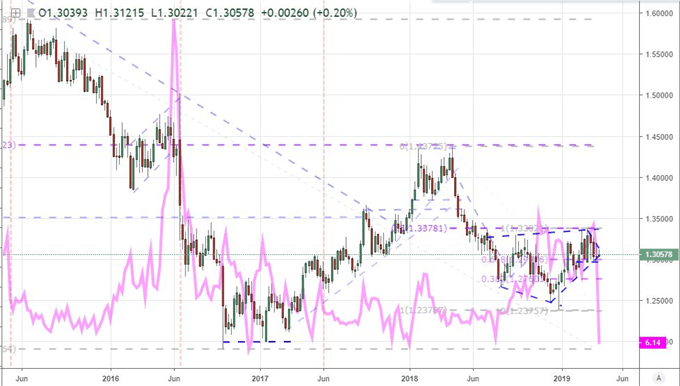 Looking out over the different majors, the Euro’s docket is particularly light, its fundamental issues are many and its general range is unmistakable. That makes a range like EURUSD difficult to break – and even traverse in a meaningful way. In contrast, the Australian Dollar is unmoored by most fundamental themes. It is however responsive to individual event risk. This past session, the currency dove, but I wouldn’t assign the performance to the event risk that crossed the wires – the consumer inflation expectations – but rather the uncertainty built in for the election called by Scott Morrison set for May 18th. Ahead, we have the RBA’s financial stability report and Chinese trade balance which will weigh in. Perhaps the most interesting of the major currencies in practical terms are the Yen crosses. If markets are tuned to range trading, there is little dispute that these pairs are showing appropriate patterns across the board while the CBOE’s Yen volatility index has all but collapsed. I’m particularly interested in the pair between AUDJPY and NZDJPY; but there is merit to USDJPY, EURJPY and CADJPY ranges as well. As for commodities, there was a general drop that seems to reach beyond their growth connections. Gold suffered one of its biggest drops in 6 months, with connections to the Dollar’s rise, volatility’s slide and an improvement in yields (financial health). Crude oil would also drop this past session but it didn’t drop back below the 61.8 percent Fib of the fourth quarter tumble. There are plenty of supply/demand headlines, but my attention is on the underappreciated correlation to the risk trends (S&P 500 will do nicely). We discuss all of this and more in today’s Trading Video. 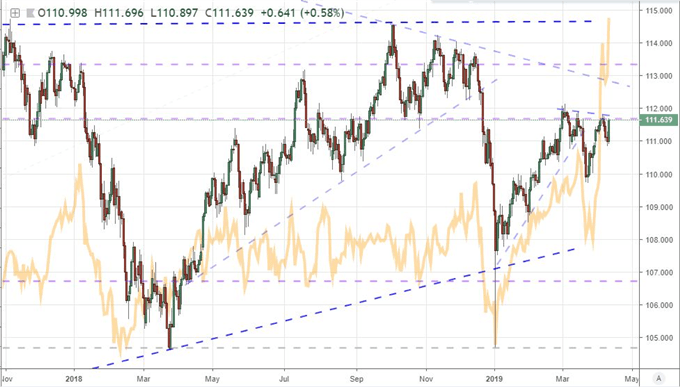