Once again, US President Donald Trump has defined diplomatic norms and trade strategy convention by dramatically escalating the trade war between the United States and China. At 12:01 AM Washington DC time Friday morning, the government announced that it was raising the tariff rate on $200 billion in Chinese imports from the original 10 percent rate to a far more painful 25 percent. Trump and his officials stated that the move was made because their counterparts had reneged on crucial details in the negotiations which had previously been agreed upon. Making clear that the country was willing to go ‘all in’ to force change from the economic powerhouse that many have accused of unfair trade practices, the move was accompanied by a warning that the tax burden would spread to an additional $325 billion in Chinese imports – essentially all goods that the country sends to the US – in ‘three or four weeks’ if a compromise is not struck. As of Friday’s close, China had not announced its strategy for retaliation, but the response is inevitable. We are venturing further into territory where there is not as much capacity for a like-for-like reciprocity, which means there is a greater risk that subsequent moves will be viewed as escalation or, even worse, have increasingly unpredictable side effects.

There is little mistaking the effect this amplification to trade competition will have on the global economy and markets. The burden will filter through into the economy and into sentiment. That said, there can still be a delay between the announcement and economic tally. It will be a few weeks before the goods being shipped to the US will arrive at customs. Meanwhile, the sides are reportedly continuing to talk which will cater to hopes that a breakthrough in negotiations will be found from an increasingly hope-dependent crowd. The ability to ignore the burden this move represents will deteriorate as we progress without clear signal that officials are nearing a compromise and the approximate deadline for escalation nears. The US is reportedly set to release details of its next steps on Monday. In the meantime, another more imposing escalation to global trade wars is creeping towards us. The 90-day review period attached to the Section 232 review the US Commerce Department performed on auto imports for the President ends Saturday May 18th. At that time, President Trump will need to make a decision on whether to apply import tax on foreign autos and auto parts or delay the decision up to six months. If the US were to expand its trade war to the developed world, it would be hard to ignore the economic and financial implications. 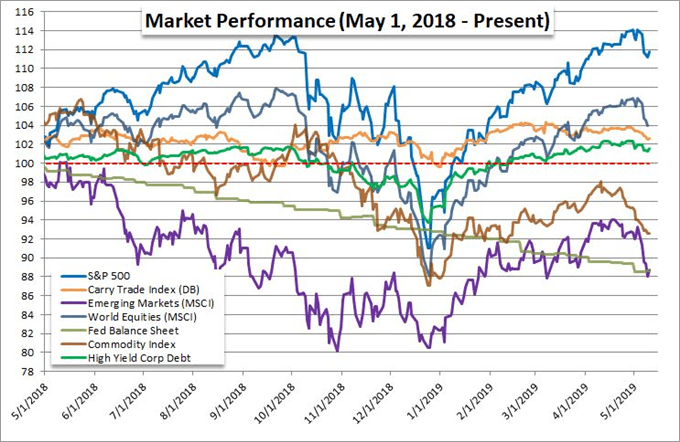 Risk Trends are Not Impervious, Don’t Commit to Complacency

What is even more remarkable this past week than the United States decision to escalate trade wars is the remarkably restrained response from the markets to the announcement. The only meaningful move that seemed to stick to the script was from USDCNH. The Dollar-Yuan exchange rate extended its advance to trade at its highest level since the opening days of the year. There is reason to dispute who stands to suffered the most in a breakdown of the superpowers’ relationship, but the market is comfortable with assigning the burden to the controlled Chinese economy. In contrast to the Yuan, however, the Shanghai Composite rallied following the news crossing the wires in prime Asia morning hours. This is most likely evidence of intervention on behalf of the Chinese government. As the day wore on, the resilience proved more universal. After initial slips from many risk-leaning assets around the world, recovery turned to gains for many assets. From emerging markets to Yen-based carry trades, the week ended on a tentative strong note. My baseline for risk appetite is the S&P 500 which slid to six week lows before eventually closing Friday with gains. The result of the intraday reversal was the largest lower wick since December 27th – the day after the market began its recovery effort. 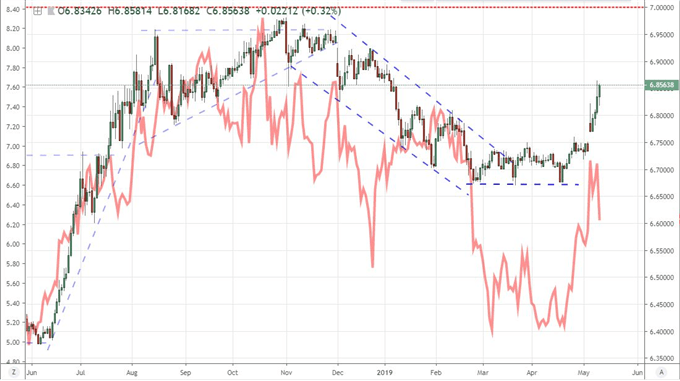 Mounting a recovery in the aftermath of an unmistakable fundamental risk is no small feat. For those monitoring the health and bearings of sentiment, it would seem to suggest that either risk trends are so robust that such troubles can be overridden or there are caveats to the news. I believe the signal of defiance the markets is temporary and exploitative. Markets continue to grope for reassurance wherever they can find it – whether that be through increasingly unrealistic belief of a quick resolution of the trade wars or the even more fanciful view that it won’t hurt economic activity. US indices are favorite measures of risk trends, but they are not particularly representative of the broader financial system. The S&P 500 failed to make anything of an overt bullish break to record highs and instead secured a false breakout reversal. Other benchmarks of speculative interest were far less dramatic about their efforts. The ‘rest of world’ equity ETF (VEU) peaked short of the mid-point to 2018’s dive, emerging markets have faltered at similarly disappointing recovery levels and carry trade seems to be far off course of any reliable trend in speculative interest. Traders would do well to keep their wits about them when pursuing a view on risk trends – whether that be their intent or simply a side effect of their efforts. Should risk trends falter earlier over the coming week, it would be easy to trigger a sentiment avalanche. 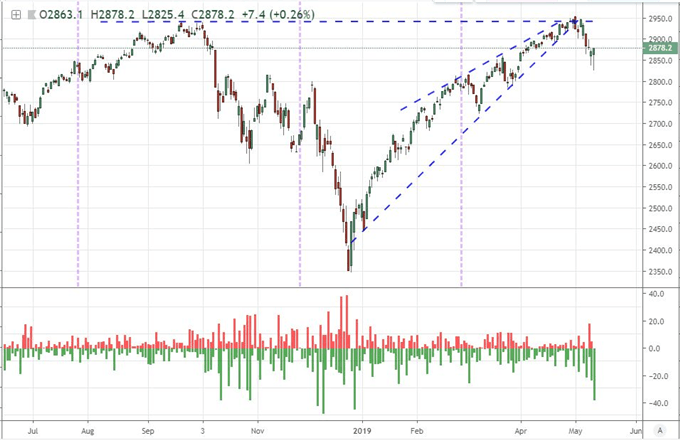 Looking out over the week ahead, there are of course other fundamental milestones to keep tabs on. There is also considerable probability that one of the more systemic themes (recession fears, monetary policy shortcomings, political risks) can find traction, but it will all likely be interpreted through a lens of trade wars. The one point of fundamental churn that is both undervalued and capable of dictating its own intent is political risk. There are so many strings that can be pulled on this global tapestry and it is in turn frightfully underpriced as a threat to the system. In the US, there have been shouts of a ‘constitutional crisis’ which could undermine stability in the government. That is particularly troubling against the nascent hope that an infrastructure spending plan ($2 trillion in fiscal stimulus) will grind to a halt. In Europe, Italy has gained serious traction as a threat to the core European community and the upcoming EU Parliamentary elections reflect a growing anti-European mentality. Brexit is counting down the days to yet another deadline and the government is not signalling any more meaningful cooperation. As for the risk of localized or global recession and/or the failure of monetary policy, that can readily develop from the fallout of trade wars.

Regionally, there is a consideration of natural exposure and a distinct correlation to the trade war situation via event risk. The Dollar’s buoyancy is a reminder that the markets are not pricing in the reality that the US is at the center of the various fronts of an increasingly global trade war. Collective retaliation will naturally curb US consumer spending and diminish the use of the benchmark currency. More readily apparent would be a slide in economic confidence via sentiment data (like the NFIB business or UofM consumer) as well as quantitative measures of flagging capital flows through data like the TIC measure. The Euro will no doubt find trade wars at the center of conversation whether through EU/Eurozone finance ministers’ meetings or the Sentix investor sentiment report. The onus of a US tariff on imported cars is particularly ominous for the EU and Germany. A habit of restraint will naturally restrict the Australian Dollar with its exports primarily destined for a struggling China and the British Pound with no end in sight for the Brexit. In the meantime, a currency like the Canadian Dollar is particularly restricted technically and has a related USMCA problem, but it could borrow motivations from elsewhere. The Swiss Franc is another currency that should not be overlooked as it lacks for internal sparks which can make for a much more interpretable market. We discuss all of this and more this weekend Trading Video. 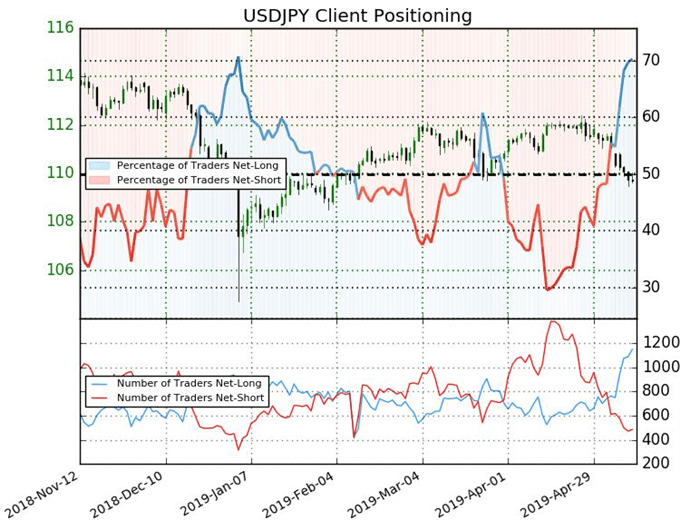