Fear over the immeasurable risk posed by trade wars continues to cool, but the fallout from the previous efforts is still registering through traditional data. The headlines for the US-China trade war continue to speculate that a deal is just around the corner with a number of sources referenced by the major media agencies suggesting a signing effort by Presidents Trump and Xi will happen before the month’s end. That is undoubtedly encouraging as far as removing an ominous threat from the horizon, but that continues to fall far short of the speculative amplifier the markets need to recover more of the ground lost through 2018 – much less embark on new highs in the decade-long bull market. Not even the Chinese Yuan nor the Shanghai Composite seem to be capable of consistent gains from here.

Meanwhile, we were delivered a modest reminder that the fight against globalization (and the collective growth it spurs) is not exactly over after it was reported that the US announced India and Turkey were removed from the Generalized System of Preferences Program. The economic bill doesn’t come close to the pain of the US-China standoff, but we shouldn’t ignore the exploration of the aggressive negotiation tactics. In particular, the lingering risk of the US applying tariffs on auto and auto part imports could represent a sudden and far more severe problem. Whether we find ourselves in a second phase of trade wars or not, the economy and markets may not fully recover regardless.

China’s National People’s Congress delivered the expected downgrade in growth target from 6.5 percent in 2018 to a range of 6.0 – 6.5 percent this year. Its budget deficit projections were also raised to 2.8 percent of GDP from 2.6 percent last year. We will receive a more comprehensive update on the outlook for the broader economy today when the OECD updates its semi-annual forecasts. A further downgrade could weigh on investor sentiment, but I think it would be far worse if they actually lifted their projections and markets still responded with a withdrawal of confidence. The S&P 500 and Dow notably did not follow up on Monday’s threat to reverse the previous two months’ impressive charge. That leaves us in technical and speculative limbo.

Chart of the S&P 500, 20-Day Moving Average and Difference between Spot and MA (Daily) 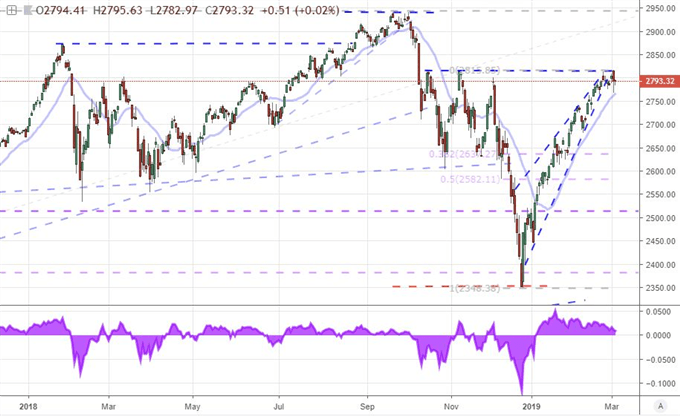 Though perhaps not ultimately the top movers amongst the majors, the Australian and Canadian Dollars retain the greatest targeted potential through the next 24 hours of trade. The Australian Dollar is already deep into its data run for the week. Following on Monday’s 4Q corporate profit, building permits and inflation data, the Reserve Bank of Australia (RBA) updated its policy this past session. The group maintained its dovish lean though it did not cut rates as a small minority had feared / hoped they would. Domestic issues were highlighted in household consumption, income stagnation, house price declines and the worst corporate lending environment since the 1980s. Swaps are now pricing in a 63 percent probability that the group cuts rates again this year. Today, RBA Governor Lowe is on the wires but the 4Q GDP figures require less interpretation and can thereby prove more market moving.

Next up in the string of rate decisions scheduled this week will be the Bank of Canada (BOC) meeting. This group is also not expected to change its current settings but its perspective will be closely observed. The group is still considered one of the most hawkish ‘potential’ major central banks with markets pricing in a 12.5 percent probability of a hike before we roll out of 2019. That is not much, but it is a significant premium relative to most others and that will likely still translate into market potential for the Loonie if the BOC were to stiffen or relax its modest hawkish bias. The Canadian trade balance and Ivey manufacturing report should also be noted. There are some very interesting Aussie and Canadian Dollar-based crosses (AUDUSD, GBPAUD, USDCAD, CADJPY) but perhaps the most appropriate pair to watch through the next 24 hours is the AUDCAD.

Chart of the AUDCAD and 50-Day Moving Average (Daily) 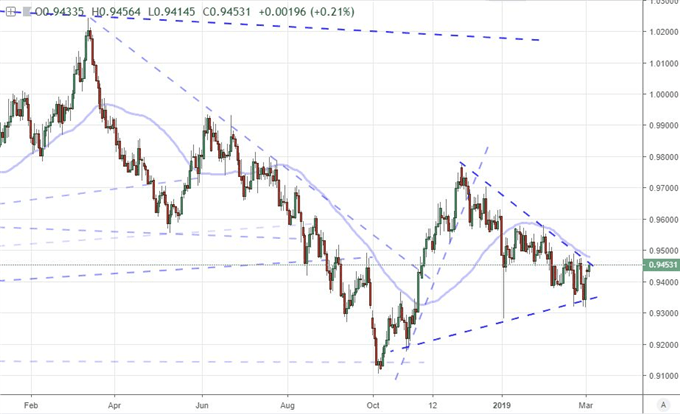 Looking further afield, there is little doubt that the Euro is the most loaded currency for potential fundamental fallout over the next 48 hours. The European Central Bank (ECB) rated decision on Thursday is the most important meeting for this week’s listings – and arguably one of the most critical central bank policy paths of the majors. It is so important because the authority is right in the middle of transitioning from an extreme easing program just as economic activity notably slides. Speculation has placed enormous premium on the Euro’s shoulders years in advance of the first possible rate hike and that amplifies the sensitivity in the nuance that we receive from the event. Yet, as high as anticipation is, the potential for generating a clear move before the details hit the wires in these next 24 hours is very low. That isn’t to say we won’t see bouts of volatility; but if we do, they will struggle for follow through.

The Pound is similarly distracted by the future, but its time frame is a week ahead. The March 12th ‘meaningful vote’ in Parliament to weigh on Prime Minister’s most recent go at a Brexit deal looms over a weary market. Any suggestion of confidence that progress is being made has been summarily downplayed by the market and instead the preparations for a no-deal (like those announced by the FPC minutes detailing the ramp in lending in Pounds and Euro) are keeping investors extremely cautious. That could continue to erode the Sterling’s charge through February 27th as GBPUSD, EURGBP and GBPJPY ease back.

As for the most liquid major, the Dollar actually found the most directed fundamental performance of the day Tuesday. A better-than-expected service activity survey from the ISM (59.7 vs 57.3) and new home sales growth report (3.7 percent) was tangible traction. True as that may be, it won’t be enough to send EURUSD below 1.1200 or DXY above 98. The best bet on that front is full-tilt financial panic or a collective collapse in the Dollar’s most liquid counterparts (Euro, Pound, Yen). We aren’t there yet. We discuss all of this and more in today’s Trading Video. 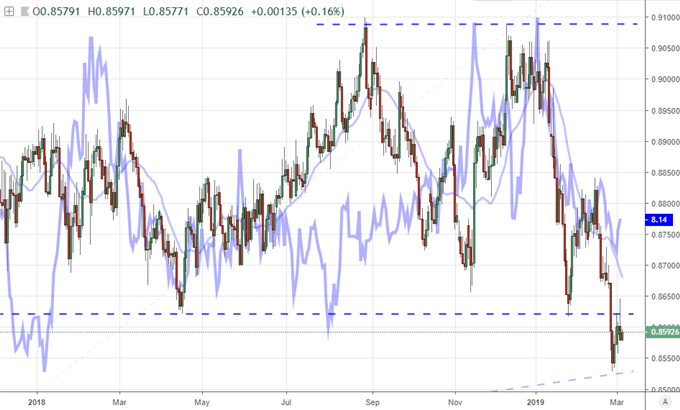