Trade wars have been the dominant theme in recent weeks, with tariffs levied and retaliations offered but that may be set to change in the week ahead. A loaded economic calendar and a stall in US-China trade negotiations may propel global growth fears to the forefront of investor concern once more.

The S&P 500 will look to gauge the strength of the domestic economy and the effects of the US-China trade war from key data due for release. The information stream will kick off on Monday with consumer confidence and trail into Thursday with the second release of US GDP from the first quarter and the advance goods trade balance for April.

The latter releases will offer critical insight on the state of trade wars and global growth – the two themes equity markets have fretted over the most in 2019. Meanwhile, consumer confidence will provide clarity on the state of the economy on the front lines – whether US citizens are looking to save or spend their money in the coming months. 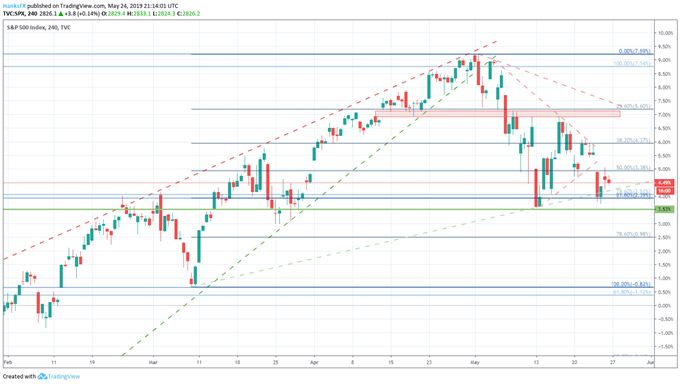 After succumbing to trade war fears last week, the German DAX will look to domestic unemployment figures in the week ahead. After fighting off a technical bear market in late 2018, the Index has mounted a considerable relief effort – now trading 13.5% higher in the year-to-date. That said, concerns regarding the strength of the German economy remain. In that same vein, the threat of auto tariffs has been postponed, but prolonged uncertainty is undeniably bearish.

With an uncertain geopolitical and economic landscape, German auto manufacturers may hold off on capital expenditures as they look to wait out the 6-month decision period. With that in mind, unemployment data due Wednesday will provide a glimpse at hiring trends in the economy and a strong print could ease concerns of a slowdown in the largest European economy – despite lingering headwinds. Like the DAX and the potential for auto tariffs, the FTSE 100 will wrestle with uncertainty of its own this week. Brexit has been a constant threat to the FTSE and delayed investment from businesses has likely weighed on economic output, but with UK Prime Minister Theresa May on her way out, the tide may begin to shift. FTSE traders should look for commentary coming from key government officials to gauge the direction the next government will take. 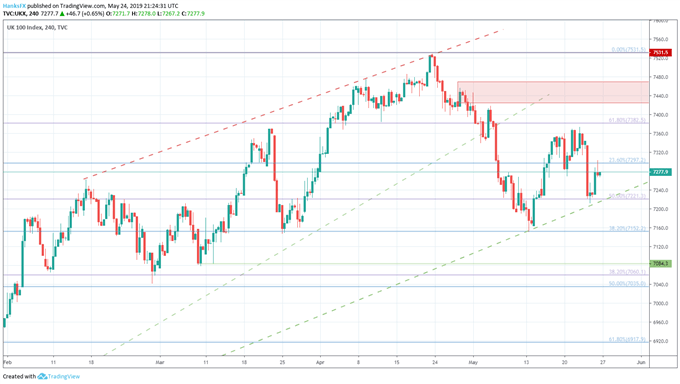 Outside of Brexit, the FTSE 100 may see some price action derived from the results of the European Parliamentary elections – as will the DAX. For equity coverage, both fundamental and technical, follow @PeterHanksFX on Twitter.

Read more:What if Mexico, Canada Join the US in the Trade War with China?