Equities traded cautiously lower in Thursday Asia Pacific trade, with benchmark indexes such as Japan’s Nikkei 225 gapping to the downside. As it traded about 0.65% lower heading into Tokyo close, consumer staples made up the largest weight of the drop. As anticipated however, there was much of sideways price action thereafter.

Financial markets are vulnerable to rising US-China trade tensions, with Beijing having reported mulling cutting rare earth exports to the US as an option. The Shanghai Composite declined over 0.8%. Meanwhile in Australia, the ASX 200 was down over 0.6% as it was weighed by metals and mining. Specifically, BHP Group shares plunged over 1.4%.

In a week full of key US economic data, ahead lays revised US first quarter GDP. Growth is expected to tick down from 3.2% to 3.0%. Simultaneously, April’s trade balance will be in focus given the ongoing US-China trade war. A larger deficit, particularly with China, risks sinking sentiment if it disturbs US President Donald Trump.

MrTrump has indicated that he sees it as a key indicator of whether the country is winning or losing in trade. US economic news flow is still tending to underperform relative to economists’ expectations, and we may get downside surprises in both GDP and net exports. For now, S&P 500 futures are pointing little higher as European markets get ready for trading.

Taking a look at S&P 500 futures to show afterhours trade, the index did close under key support at 2789. In its near-term downtrend from the beginning of May, guided lower by the pink falling resistance line below, this has opened the door to testing 2743. Otherwise, clearing the falling trend line exposes 2900. 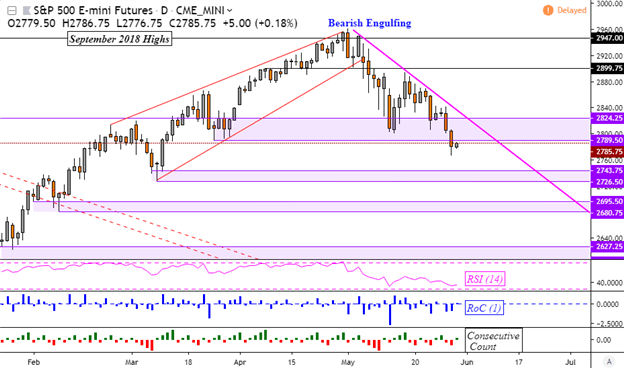