The anti-risk Japanese Yen was the best-performing major on Tuesday, rising alongside a downturn in market sentiment as anticipated. This was triggered by a trio of concerning developments. First, the United States escalated trade tensions with the European Union, threatening to impose $11b in tariffs on their imports because of EU subsidies for Airbus, a major commercial aircraft maker.

Then later in the day, Italy trimmed 2019 GDP estimates to 0.1% from 1.0% as it raised this year’s budget deficit forecast to 2.5%. The latter has been a sticking issue between the country and with Brussels, increasing concerns about a Eurozone debt crisis. Lastly, the IMF cut the 2019 global outlook to its weakest since the 2008 financial crisis.

After the German DAX 30 tumbled by the most in over two weeks (as expected), the S&P 500 followed suit as it ended its longest winning streak (8 days) since early October. US front-end government bond prices rallied, signaling risk aversion that engulfed the markets. The haven-linked US Dollar was little changed though, mainly due to losses during the first half of the trading session.

Taking a look at the more liquid futures, the S&P 500 left behind a bearish reversal warning at its latest peak just under 2900. That would be an Evening Star that is coupled with negative RSI divergence, signaling fading upside momentum. This may precede a turn lower towards a range of support between 2789 and 2824 on the daily chart below. 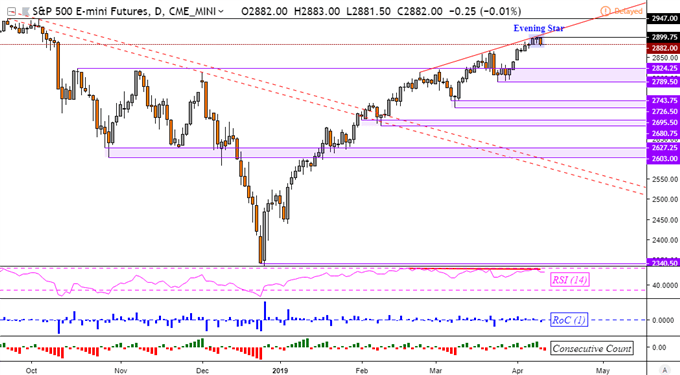 The downturn on Wall Street poses as a risk for Asia Pacific equities, particularly with rising concerns about another trade war front and slowing global growth. It wouldn’t be too surprising to see the Japanese Yen extend its advance while the pro-risk Australian Dollar takes a hit. The latter will also be looking to local consumer confidence which may surprise higher, extending AUD/NZD’s bullish reversal. 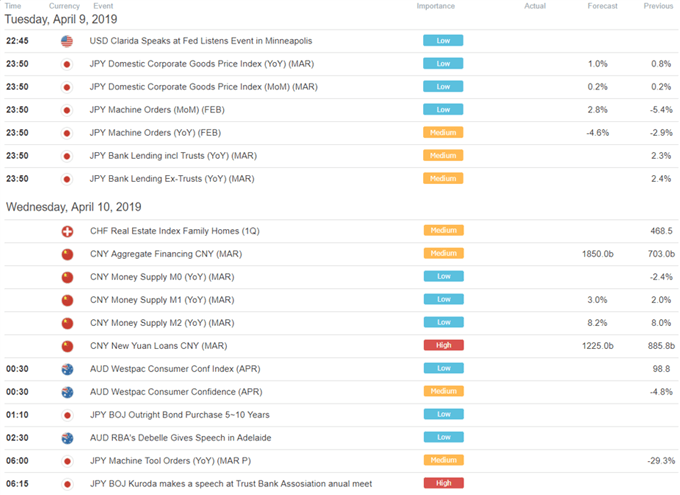