The British Pound was one of the best-performing majors on Friday, outperforming as UK Prime Minister Theresa May bought more time for the Brexit deadline in the event her divorce deal does not pass in parliament this week. Sterling also had a slew of dismal European PMI to thank, which weakened the Euro. Keep in mind that these followed a more dovish ECB, adding to concerns about economic weakness.

Risk trends took a turn for the worst, with the S&P 500 dropping almost 2%, wiping out all cautious upside progress that led into Friday. In fact, the spread between US 3-month and 10-year government bond yields, a closely-watched section for recession signals, turned negative for the first time since 2007. Unsurprisingly, the anti-risk Japanese Yen largely outperformed against its major counterparts. The US Dollar also rose.

Using futures to show after-hours trade, the S&P 500 had its worst day this year so far as prices formed a bearish engulfing at the recent top. Negative RSI divergence accompanied the indexes’ push above key resistance at 2824, showing fading upside momentum. This may precede a turn lower towards support at 2726, especially given confirmation of another close to the downside. 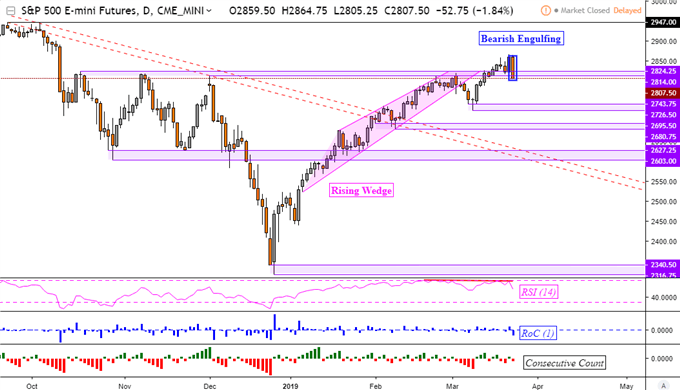 As the new week begins, the Asia Pacific economic docket is relatively light. This places the focus on risk trends. As such, we may see regional bourses follow Wall Street lower. Nikkei 225 futures closed at their lowest since March 8th on Friday. This may send the pro-risk Australian and New Zealand Dollars lower as the Japanese Yen may extend its advance from Friday. 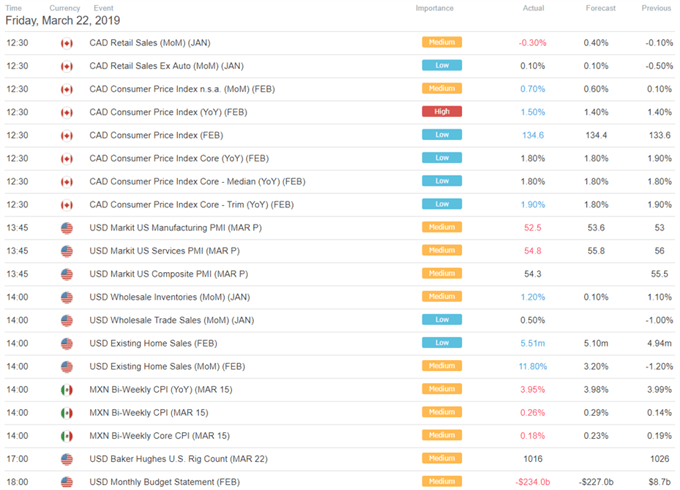