There was no mistaking the smell of fear across the capital markets this past session. We have been floating through treacherous fundamental waters for some time amid the escalation of trade wars, a slowing in economic activity and a more obvious state of political instability around the world; but it seemed investors decided to finally pause and take notice of their predicament this past session. What we should be evaluating now is whether this was just a temporary pang of self-awareness that leaves the real resolutions to the indeterminant future or if it is the unstoppable spark of a self-sustained immolation of speculative excess. While I think there are various measures that can speak to the intensity and to certain originations of any collapse in sentiment, I will start with the S&P 500.

Equities are the most common asset class in global portfolios and the US market is the largest in the world. As such, the S&P 500 – which channels the heaviest derivative trading through ETFs, futures, etc – is an appropriate single-source reflection of ‘risk’. It was therefore noteworthy this past session when a terminal wedge (one essentially running out of room) finally found its resolution with a stiff break lower. While the technical jog was inevitable, the intensity of the move was still a surprise. The slump through intraday lows was a significant contrast to what we have seen these past few weeks’ of measured movement. While this and other US indexes were end well off their respective session lows, there is still anxiety owing to the market’s proximity to a pivotal technical support level. Just above 2,800, there is a ‘neckline’ to a multi-week head-and-shoulders pattern that threatens to turn 2019’s bullish ambitions. 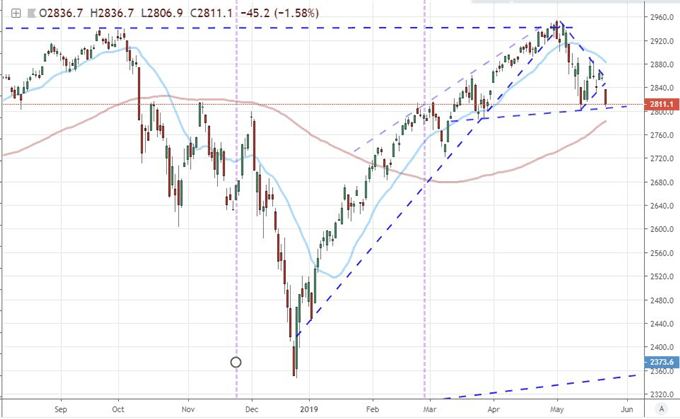 While we can pick a single measure to reflect speculative intent across the entire financial market for ease, it is far more useful to evaluate sentiment across regions and asset classes to establish conviction. The bigger picture perspective renders the same signals for caution. Global equity indices suffered the same drop on the day and many have nearby support levels to contend with. Emerging market assets, junk bonds and carry trade were all under pressure even at a steeper discount to the uniquely inflated US stock market. Breadth and depth to fear dramatically increases the potential of a genuine. That said, an escalation would have to overcome a natural market constraint in liquidity. We are heading into the end of the week when liquidity drains off and this is further a holiday-weighted weekend for the US and UK which will act to dampen rampant speculative fires. In other words, if risk aversion persists through Friday; it won’t just take out serious technical levels, it will raise the threat of a full bear swing temporarily interrupted. 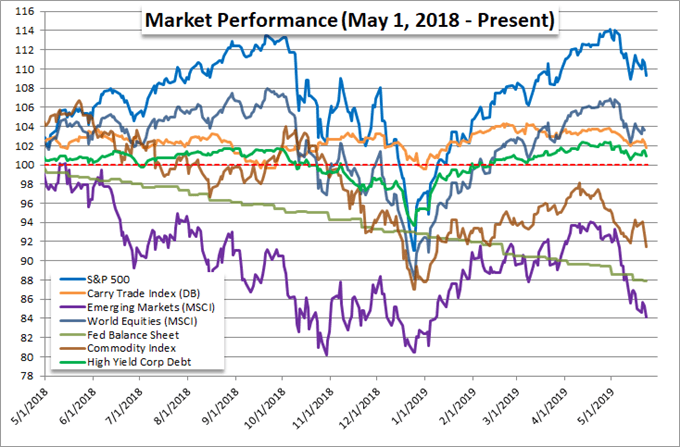 As we keep tabs on the technical milestones, it is the fundamental charge that will eventually cast the die on our speculative fate. Global growth received an important update through various sentiment assessments and data this past session. The ECB’s transcript from its last monetary policy meeting was one such milestone with a voiced concern amongst its members for the Eurozone economic pace moving forward. In more traditional lines, the global economy received a troubling health check via Markit’s May PMI activity reports. Aside from Australia’s improvement, the Japanese activity report turned to contraction (a reading below 50) while the Eurozone and US measures slowed but held above the critical growth/contraction mark. A related but substantially more abstract theme causing ripples through sentiment is political stability. The EU Parliamentary election and breakdown in Brexit negotiations on the UK side are pressing risks, but the headlines in the US stole the headlines this past session. US President Donald Trump walked out on Congress’s Democrat leaders yesterday after saying an infrastructure deal couldn’t be worked on at the same time that investigations into his administration were ongoing. That $2 trillion fiscal stimulus may prove essential for keeping the US and global economy upright if the world acts on its many overriding risks.

Keeping track of the most disruptive features of our future, the trade war – concentrated back on the United States and China – is the storm that keeps blowing. Following the past week’s upgrade in the tariff rate on the United States’ $200 billion in imports and China’s retaliation on $60 billion in goods, we have seen more measured but nonetheless provocative moves made to raise the barriers to compromise between the two countries. Chinese officials said that they would not return to talks until the United States changed its “wrong actions”, but it did not state clearly what those actions were. The United States blacklisting Huawei and consideration for the same of 5 surveillance firms likely qualifies. In the meantime, the White House’s announcement of a $16 billion aid package to farmers juxtaposed to China’s tax holiday for local chipmaker and software companies reflects moves meant to weather a protracted engagement. While USDCNH’s 7.0000-mark is critical in this assessment, AUDUSD will be the more sensitive measure. For local market performance, the contrast between China’s Shanghai Composite and the FXI China ETF will reflect on the often unclear pressure on domestic markets. 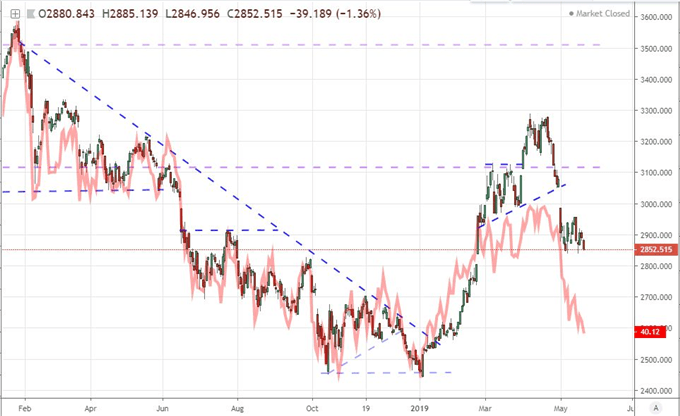 Where is the Dollar Taking Its Beating, Can the Euro and Pound Mount Serious Moves Now?

Against the backdrop of volatility in the broader capital markets, we would see a surprise standout in activity for the Forex market in the US Dollar. Lately, the benchmark currency has deviated from its most liquid counterparts to drift through a non-descript course, drifting gradually higher. That underlying bullish bias was on display through the morning session Thursday, seemingly catering to the currency’s safe haven status. Yet, shortly after notching a two-and-a-half year intraday high, the Greenback pitched lower on its way to the biggest single-session loss in three weeks. The intraday reversal in the meantime would result in the biggest bearish tail since February 15th – a strong signal of speculative intent. Yet, a technical turn alone is not enough to secure a true trend. Fundamental drive make or break any true runs. Clearly the USD is not aligning to its deep haven status nor is it likely that interest rate speculation – which dropped further Thursday – suddenly carries full weight. A fading carry trade status and growing appreciation of trade war blowback may retain control. That is of course so long as a collective wave in the most liquid currencies doesn’t force the Greenback into a counterpart role. 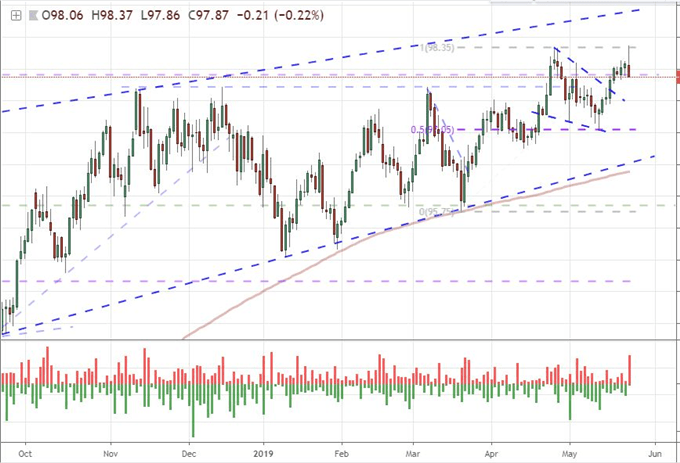 From the US Dollar’s most liquid counterparts, we are generally in a state of wait-and-see. For the world’s second most liquid currency, the Euro, we have seen its activity level grind to a halt. The 20-day ATR on an equally-weighted measure of the EUR has collapsed to levels only comparable to that baseline of complacency back in Summer 2014. The focus of course is on how the EU Parliamentary elections play out. There is considerable consequence to this political event as a strong showing for the generally anti-Euro nationalists could signal a systemic threat to the world’s second most liquid reserve currency. There is no faster way to sharply and permanently devalue a currency than to undermine its absolutely utility. Given we won’t know the outcome of this election until the end of the weekend, it follows that the Euro will tread water until then. 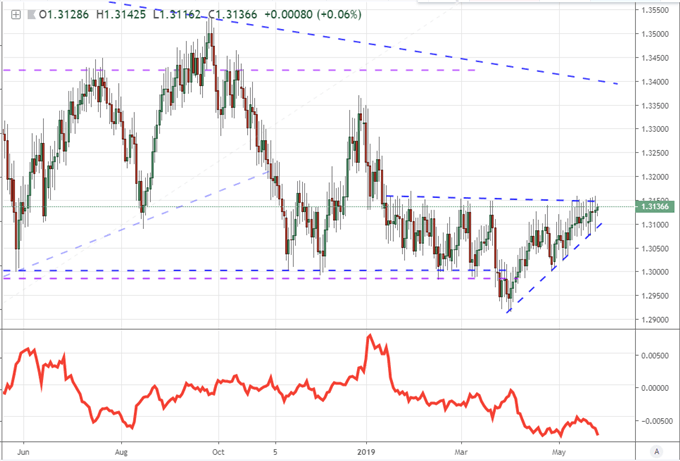 As for the British Pound, the fundamental compass setting remains overtly bearish. Brexit still weighs on the minds of Brits, British business leaders and foreign investors. There is still critical negotiation that needs to be hashed out between UK and EU representatives in the divorce proceedings but there isn’t even a whiff of a clear position from the United Kingdom. That places all the focus on Prime Minister Theresa May’s ability to work out a clear plan. On that front, it was reported that May had decided not to publish her Withdrawal Agreement bill on Friday as previously intended due to a ‘mutiny’ in her cabinet. Rumors of the PM’s impending resignation – forced or voluntary – refuse to die. The Sterling can extend its record-breaking 14-day tumble versus the Euro against this backdrop, but it could just as readily stall. We discuss all of this and more in today’s Trading Video. 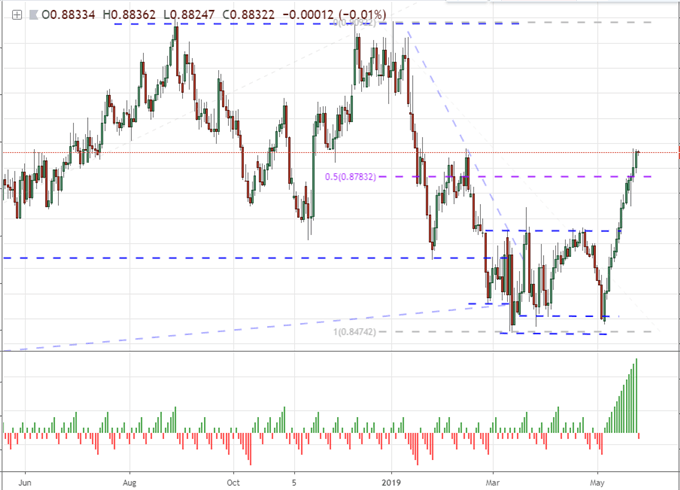