The S&P 500’s current technical picture could be taken from a textbook. The range resistance near 2815 is clearly a level that the market is aware of and takes seriously. Yet, recognition does not seem to be setting up the subsequent breakout nor is it rousing those sure that a range swing is staging the next opportunity. If these were markets whereby speculative interests were comfortable to shift or build on their own, there would likely be little hesitation for this benchmark – nor would we likely see volatility settle back to the levels we’ve had to suffer recently. Yet, it is clear that sheer market will is not a dominant force in our financial system at the moment. ‘Animal spirits’ need to be supplemented by important fundamental themes.

Carrying the torch over the past few weeks, the interest in slowing global growth trends was stirred by a run of Chinese data. Despite the dramatic drop in financial figures at the start of the week (financing and loans), the related statistics this past session in fixed assets and property investment showed modest improvement. These are areas of the economy where capital injections carry more weight, but the baseline growth figures reflected little of that benefit. A jump in the jobless rate (4.9 to 5.3 percent), slowing in retail sales and cooling of industrial production reminds that the government has lowered its GDP forecast to a range of 6.0 to 6.5 percent.

Ahead, we have a few lower level scheduled updates on growth (like the US consumer sentiment report), but the Bank of Japan (BOJ) rate decision holds far more weight. Don’t underestimate the importance of this group’s policy decision. It may not move the Yen significantly but the connection between monetary policy and global risk trends is an essential for the past decade. Further, the theme will gain more traction in anticipation of next week’s central bank meetings – specifically the Fed and BOE. Trade wars is another theme not quite settled. Among a few interesting headlines, the most noteworthy was President Trump’s suggestion that his administration would place tariffs on European goods if its primary counterpart did not come to negotiate in earnest. 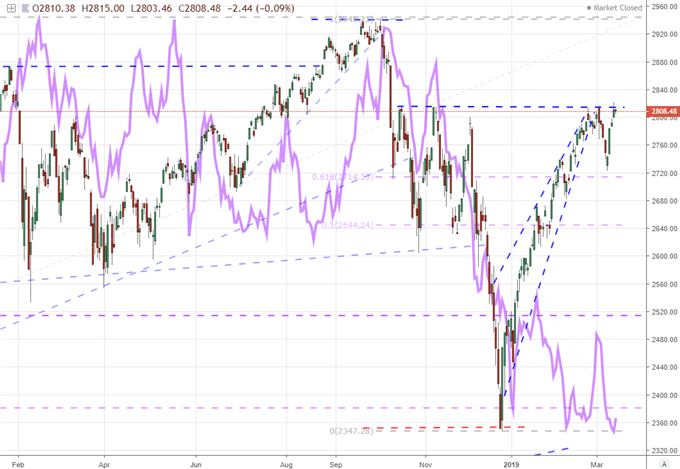 The British Pound has been this week’s most impressive performer. In a series of Brexit votes, we have seen volatility swell behind the currencies and all of its crosses. Yet, in contrast to the biggest Cable rally in years and a 5-day average daily range swelling on an equally-weighted Sterling index Wednesday, the currency seemed to lose much of its certainty or fear this past session. The House of Commons debated and voted on a range of amendments Thursday with most of them being rejected. Notably, a vote to delay Brexit for a second referendum was handily defeated (85-334) while amendment I which would have given Parliament greater control over the proceedings in these twilight hours was narrowly rejected (311-314). The piece that would keep this train rolling however passed 412 to 402.

A call which would push Prime Minister May to request an extension on the Article 50 close date (March 29th) blurs further the uncertainty of the already unclear event. With a third meaningful vote – MV3 if you see the jargon used – is scheduled for March 20th. If passed, the extension will supposedly be requested for June and if rejected it will reportedly be a fluid date. This timing should make the Pound and particularly GBPUSD dangerous (or exciting depending on your disposition) to trade. We are running out of maneuverable room on delaying Brexit and the Bank of England (BOE) rate decision is on tap Thursday.

For the Cable, we have to add the significant weight of next Wednesday’s FOMC rate decision which will include the quarterly Summary of Economic Projections which has generated more than its fair share of volatility. For those trading a pair like GBPUSD or GBPJPY, the range boundaries are fairly straight forward such that a rejection or break are clear. However, for something like EURGBP, the appeal of a break below 8620 or 8550 should draw scrutiny over follow through. I am fully prepared to reserve follow through expectations until the official Article 50 date is resolved. 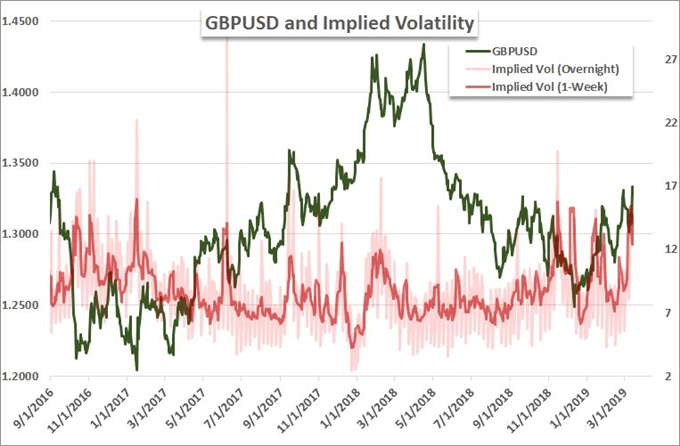 Aside form the big, systemic themes and Brexit headlines, there was some fundamental churn in certain segments of the global market. From the Dollar, the steady slide leading the DXY Index to match its worst run since August finally had a positive day to break the daze. Yet, if you were looking to the single currency to mount a meaningful recovery to return to its multi-year high – much less surpass it – you’d be hard press to find conviction born from its own fundamental development. Existing home sales unexpectedly collapsed 6.9 percent while import inflation continued to drain rate expectations with a 1.3 percent pace contraction. Ahead, we have the University of Michigan consumer sentiment survey and TIC capital flows report which can hit more resonant issues, but I wouldn’t set my expectations too high.

For the second most liquid currency in the FX market, there seem heavier fundamental tide from outside its own fundamental influence. The Brexit uncertainty is clearly infecting the Euro as are the trade war threats from President Trump. These are far more available risks than the localized scheduled event risk and abstract issues such as regional political uncertainty which continues to erode bulls’ enthusiasm through members like Italy, France and Spain. If you are looking for loaded event risk for a fundamental spark, the Canadian Dollar deserves a closer look. This past session, Bank of Canada (BOC) Governor Poloz remarked that he hears regular complaints over the level of lending rates – Canada is only second to the Fed – and swaps show forecasts are softening. Friday will bring existing home sales and manufacturing sales data, yet these are not consistent market movers for the Loonie.

A market to watch closely for its speculative overtones is US crude oil. The commodity marked an important 57.85 breakout on Wednesday, but the lack of follow through is tangible. Traders recognize the trouble spinning up the speculative engines. Retail CFD traders have flipped their net speculative exposure on the market to negative for the first time since early October. We discuss all of this and more in today’s Trading Video. 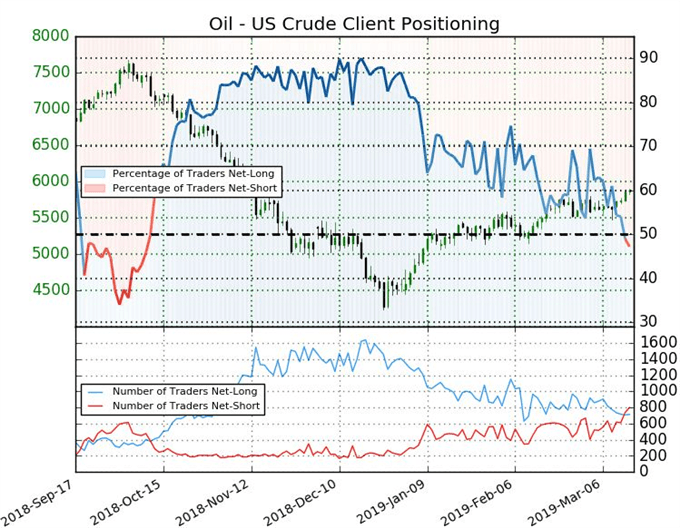