Asia Pacific markets slumped on Thursday, following Wall Street lower as US equities were dragged down by the health-care sector. Those concerns echoed into the Nikkei 225, as anticipated, where the Japanese index fell about 0.75%. Pharmaceuticals heavily underperformed, dragging down the index.

South Korea’s KOSPI shed more than 1% of its value as it sunk with Samsung Electronics (a major component of the index). Reports crossed the wires that the new Galaxy Fold, a recently designed foldable phone set to be released on April 26, is breaking after just days of initial use.

Meanwhile, the Shanghai Composite declined more than 0.20% heading into the close as Australia’s benchmark ASX 200 was close to little changed. The latter is struggling to clear near-term resistance just under 6285.

S&P 500 futures are pointing notably lower, accompanied with bearish reversal signals. This hints that European and American financial markets may be in for a rough ride ahead. This may be exacerbated if US retail sales misses expectations, which has typically been the case with local data as of late.

Looking at Nikkei 225 futures to show afterhours trade, the index has formed a bearish Evening Star candlestick pattern at the most recent peak. If there are to be losses ahead, keep a close eye on the rising support line from late March (blue line below). Clearing it may open the door to further losses. 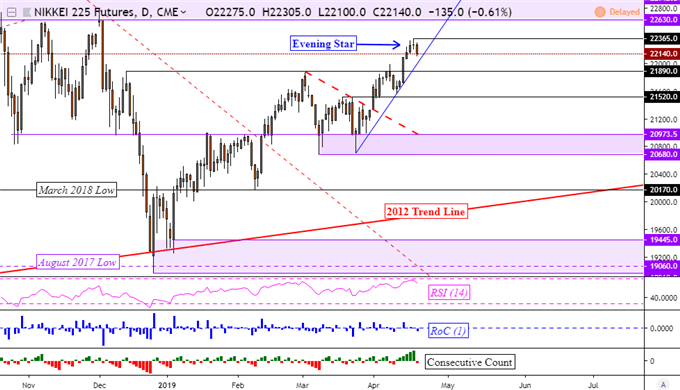