Equities in Asia traded mostly lower, contrasting a tepid day in the prior Wall Street trading session. This falls in-line with warnings after the VIX ‘fear gauge’ spiked higher in recent days. You didn’t have to look for to find that concerns of a trade war were guiding markets to the downside.

The Nikkei 225 was down over one percent heading into the close after US President Donald Trump, who during a campaign rally, said that China ‘broke the deal’. This comes as a delegation team from the world’s second-largest economy prepares for negotiations to perhaps reach a deal with the US on Friday.

This has followed an unexpected turnaround in rhetoric from the White House where at the beginning of the week, an expression of displeasure with the pace of trade talks crossed the wires. Risk of a breakdown in trade negotiations largely overshadowed other developments.

The Shanghai Composite was also down over one percent as it and AUD/USD looked past Chinese inflation and aggregate financing data. South Korea’s benchmark KOSPI suffered even greater with losses at one point exceeding 1.5 percent.

With that in mind, S&P 500 futures are pointing increasingly lower as European and US markets could be bracing for more risk aversion. This may be compounded if Fed Chair Jerome Powell delivers similar rhetoric from last week’s neutral monetary policy stance. As such, the pro-risk AUD could decline.

Taking a closer look at S&P 500 futures, to highlight afterhours trade, reveals that recent declines risk turning into a more pronounced downtrend. This is underpinned by further confirmation achieved after the Bearish Engulfing candlestick. Further declines places near-term support at just above 2824, with sentiment readings hinting of a bearish-contrarian trading bias. 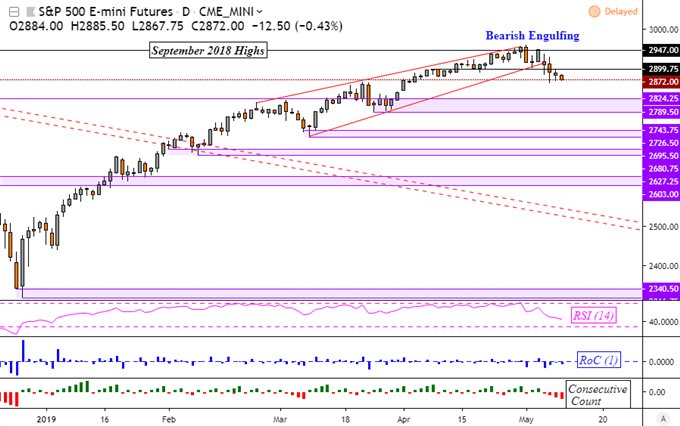