See how retail traders are positioning with these critical technical moves in EURUSD, the Dow, gold and other key markets on an intraday basis using the DailyFX speculative positioning data on the sentiment page.

Complacency and moral hazard have been strong with the global markets for the latter half of this past decade. We have seen general concerns like the limitations of monetary policy conveniently overlooked or acute threats like the August 2015 China revaluation fallout quickly rendered inert by the market’s unquenchable thirst for steady capital gains that compensate for record low yields. That collective conviction to a self-fulfilling bullish condition cannot offset all storms however.

Eventually, the competitive nature of the financial system – and global economy – will override the buffer. And that is a dangerous proposition when we consider what tangible backstops we would then have to rely upon. The health of the global economy has taken a very obvious turn for the worst. The major central banks – saviors of the previous crisis – are willing but ultimately maintain little in the way of capacity to fight any further fires. And, the environment of political discord and trade wars should tell us how confident to be in a government-led rescue effort.

There is a lot riding on otherwise modest technical reversals from the likes of the S&P 500 and Dow. These benchmarks only started to add some tempo to the turn from a January-February recovery rally, but the implications stretch beyond these patterns or this asset class. In past years, traders would be eyeing this correction with a clear interest of establishing where best to buy on the dip. Nowadays, the pain of the heavy reversals in October and February 2018 are fresh in participants minds. Beyond that, these are the best performing risk assets over the past decade – a recovery that began exactly a decade ago. If they are taking a turn for the worst, what does that mean for other, less stalwart markets? 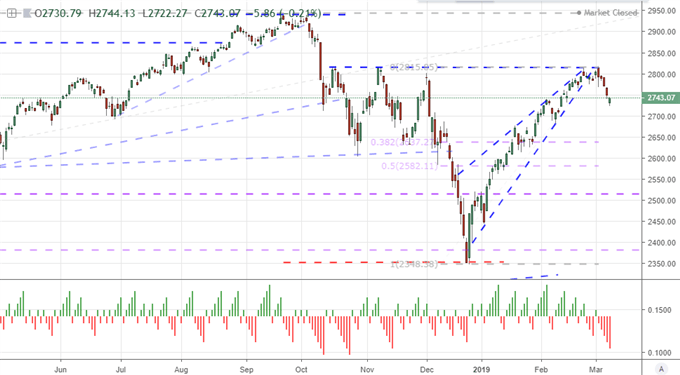 The world’s most liquid currency pair – and by virtue the most liquid asset in the world – has been trading in an exceptionally small range. The past 60 day range is still one of the smallest for the pair since the Euro’s inception. Offering the same backdrop, the pair’s 20-day average true range (ATR) offers the weakest priced-based volatility reading since the Summer of 2014. That comparison is a loaded one as that period nearly five years ago preceded an incredible tumble for EURUSD. The 3,500 collapse from 1.4000 was quite explicitly attached to actions by the European Central Bank (ECB) – and to a lesser extent the Federal Reserve (Fed). The ECB threatened to ramp up its accommodative monetary policy if the exchange rate continued held its high bearing or extended further. It eventually made good on that threat with the second TLTRO and then the QE program.

At the same time, the Fed announced it was transitioning away from its QE3 effort and starting to signal an inevitable turn towards tightening efforts (rate hikes). Fast forward to today and we have some of the same talking points but materially different circumstances. The ECB this past week announced unmistakable concern over the future with a dramatic cut to its growth forecast and a simultaneous introduction of a third round of its TLTRO program. That news was good enough to push EURUSD below a 1.1200 level that represents both the 61.8 percent Fibonacci retracement of the 2016 to 2018 range as well as the same percent retreat in its historical range from the Euro’s inception back in 1999.

Yet, the market noticeably would not hold below that obvious level through Friday’s close. Perhaps this a lack of confidence in the European authority’s ability to deflate, or perhaps it is a counterbalance from the US central bank. The Fed’s tone shifted materially this year and the Beige Book made clear the economics were there to back up a more cautious view. Then, following the weak showing of the NFPs Friday, the market started to price in a moderate probability (20 percent) that the group will cut rates by 25 bps by the year’s end. That certainly curbs ambitions for the Dollar to break near-two year highs. Yet, I think the distinguishing mark here is more systemic. There was still ambitious speculative appetite back in 2014 and monetary was still considered a capable prow against emergent risks. Confidence in monetary policy’s ability to beat back new storms has dropped materially. 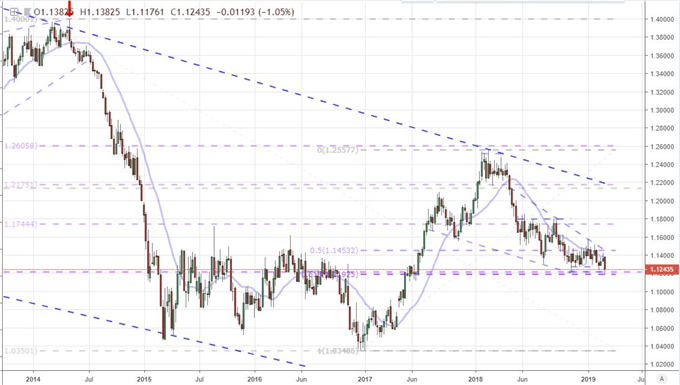 Watch the Pound as Key Brexit Votes Come to Table

None of these themes are resolved heading into the new trading week. That means they will still carry an inordinate amount of sway should a spark move any of these issues back to the forefront. Yet, outside of the unexpected, there is considerable anticipation surrounding the British Pound’s top events over the coming week. On the data front, we have monthly GDP, trade and other important economic events. That said, all of the attention will be fixed on the same top priority from the past two years: Brexit. This week, we are set for an important Parliamentary vote which could lead to two further important sessions thereafter. On Tuesday, Prime Minister Theresa May is expected to put her latest Brexit proposal up to judgement and the mood suggests it will be a close decision. Unless the EU offers further concessions over the weekend, however, it is more likely that the PM’s plans are once again rejected which would bring us to a follow-on vote Wednesday.

That vote would look to establish whether a ‘no deal’ outcome should be completely left off as a possible solution. That seems to be the popular consensus from both Labour and Conservatives, so a third vote would likely follow on Thursday which looks to determine whether May requests an extension on the Article 50 timeline. An approval of the proffered plan would be the most forgiving outcome for Sterling trading as the outlook would not be so clouded by vastly different scenarios. An extension of the timeline to work out a deal would buy time and thereby push back a Sterling panic, but it will only increase the anxiety for direct and indirect investors in the UK. Beware trading the Pound (GBPUSD, EURGBP and GBPCAD are the pairs I am most closely watching) not because of the volatility but rather the lack of commitment in any direction until this situation is resolved. We discuss all of this and more in this weekend Trading Video. 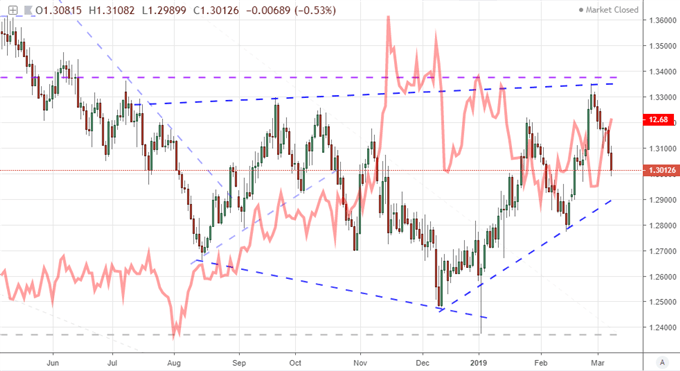