Equities traded mixed during Asia Pacific markets on Tuesday after a similar performance on Wall Street. There, energy shares drove most of the gains in the S&P 500 as crude oil prices rallied on Iranian supply disruption concerns.

The Nikkei 225, Japan’s benchmark stock index, was little changed around -0.05% heading into the close. Fast Retailing Co., parent company of apparel-retailing giant Uniqlo, declined more than 2.7%. This may have been due to fears of higher oil prices increasing shipping costs and thus hurting profits.

Meanwhile, the Shanghai Composite declined 0.35% as the KOSPI traded relatively flat. Australia’s benchmark ASX 200 traded more than 0.7% higher on the other hand, guided by gains in banks which account for about a 22.9% weight in the index. Commonwealth Bank of Australia shares rose about 1%.

Taking a look at currencies, there appeared to be signs of risk aversion. The anti-risk Japanese Yen aimed little higher while the sentiment-linked Australian and New Zealand Dollars fell slightly behind. AUD/USD is awaiting tomorrow’s inflation report.

S&P 500 futures are still little changed overall with a slight bias lower as markets continue eyeing the US earnings season. Ahead Twitter Inc. and Harley-Davidson first quarter reports are due. The latter may bring up concerns about recent revived threats of an EU-US trade war. 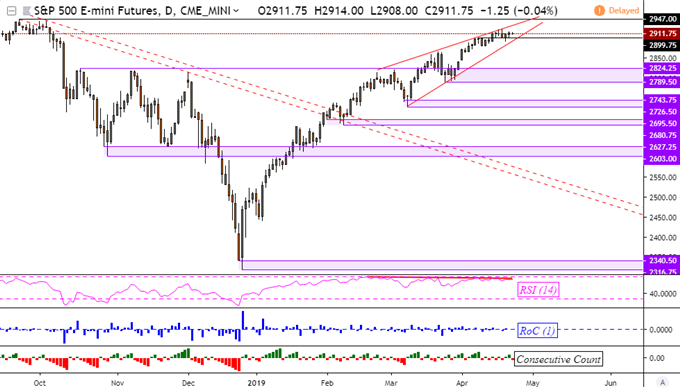