Asia Pacific equities generally traded higher in a rather choppy session. On Wall Street, the S&P 500 ended the day close to little changed following a mixed start to the early phases of the US earnings season.

Japan’s benchmark Nikkei 225 was supported by wireless telecommunication services as NTT Docomo soared. The company announced smaller-than-expected price cuts as the stock rose about 3.4%, its best performance in a single day since December.

Elsewhere, the Shanghai Composite climbed out of negative territory as it rose over one percent. In Australia, the ASX 200 rose more than 0.35% as the equity index was supported by financials which carry about a 31% weighting in the index.

There was a temporary surge of risk aversion around the time of the RBA minutes from the April policy meeting. As anticipated in this week’s fundamental forecast, AUD/USD weakened and remained lower despite equities resuming their upside push. The anti-risk Japanese Yen underperformed.

Ahead, the equity outlook is vulnerable to disappointing economic sentiment surveys out of Europe. Another risk may come from softer-than-expected US industrial production. Lately, data out of the world’s largest economy has been tending to underperform. More of the same may add fundamental pressures to the S&P.

Taking a look at S&P 500 futures, in order to see afterhours trade, the index is carving out a falling wedge bearish pattern on the daily chart. This is accompanied with negative RSI divergence which shows that upside momentum is fading after resistance was cleared at 2900. As such, technical considerations err on the side of caution as the floor of the candlestick pattern may be tested soon. 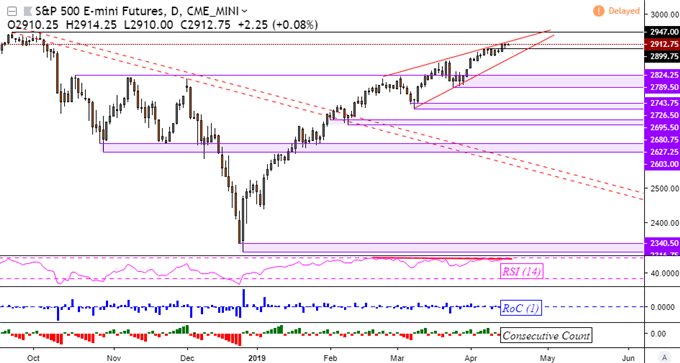