See what live coverage is scheduled to cover key event risk for the FX and capital markets on the DailyFX Webinar Calendar.

After a Full-Tilt Risk Reversal is Averted, Trade Wars Remains the Most Pressing Market Threat

The markets were perched on a technical cliff through the closing session of this past week and there were some heavy fundamental winds threatening to push us over the edge. Ultimately, however, a crisis was averted and the day of reckoning was pushed out into the future. Taking stock of our troubled positioning on the charts, the S&P 500 and Dow reflected the most overt threat to the speculative landscape. Both indices forged a strong bearish wedge break on Thursday which would in turn drive bears to the extremes of much larger head-and-shoulders support levels (‘necklines’). Below 2,800 for the S&P 500 or 25,250 on the Dow, we would have breaks on fairly overt reversal patterns. While technicals alone often fall short of charging self-sustaining momentum, it is not like we are lacking for fundamental charge to convert a spark into a full-fledged fire. Further, we have seen a general willingness across the financial system to deflate markets where value has been absent. As we wait to see whether the US indices return to their past three month range or break into a true reversal of 2019’s bullish wave, I will be keeping close track of the disparity rising out of risk assets with a traditional growth dependency. The tumble in aggregate government bond yields is my relative preferred mirror to the S&P 500 – and it is still dropping. 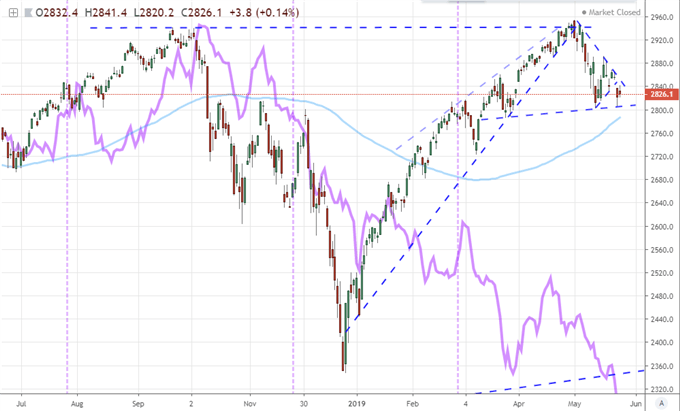 As we track the threats circling the markets, there is a tendency to prioritize the most familiar risk. However, we shouldn’t lose sight of those issues that simply lack an unforeseen catalyst to sweep the markets lower. The health of the global economy and the prospect of an eventual recession remains a smoldering concern that simply awaits reignition. The May PMIs for Asia, European and the US this past week made clear we are still facing a bearish trajectory. While there are a few ancillary GDP readings due in the week ahead, this matter would more likely find its charge from an unforeseen event. Monetary policy is much the same. Through the end of the week, research from the Fed Board found that tightening by the group could risk a banking crisis for a country that has direct exposure to the US (rather than broad diversification) like much of the Emerging Markets. The true threat in my estimation is the scenario where a failed economic trajectory puts the central banks as last resorts to stave off crisis and their lack of policy tools will be made bare. Then there are political risks. The rise of nationalism isn’t just a social shift. A drive to secure faster domestic growth at the expense of trade is a way to ensure stunted global growth. Then of course there is the risk the US and Iran tipping off an active economic or even military engagement. 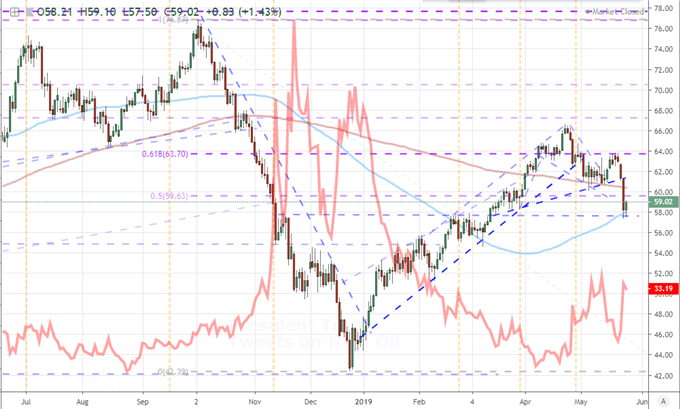 When the comparison is made from abstract theme to abstract theme, the most likely fracture in any future market calm is likely to follow trade war developments. Officially, we are not expecting the next move that materially escalates the economic burden until at least a few weeks in the future – the timeline offered by the Trump administration to their Chinese counterparts to compromise or find the steep tariff placed on $200 billion in the country’s exports to the US expand to the balance of its goods – another $300 to 325 billion depending on the estimates you rely on. Much of the deterioration in relationships over the past week has been in moves to threaten the other country’s access or supply chain – the US banning Huawei and President Xi making a not-so-subtle threat to the rare-earth materials market are designed to be provocative. In the meantime, data keeps stacking up that the trade wars are undermining growth and there is much more of that ahead. 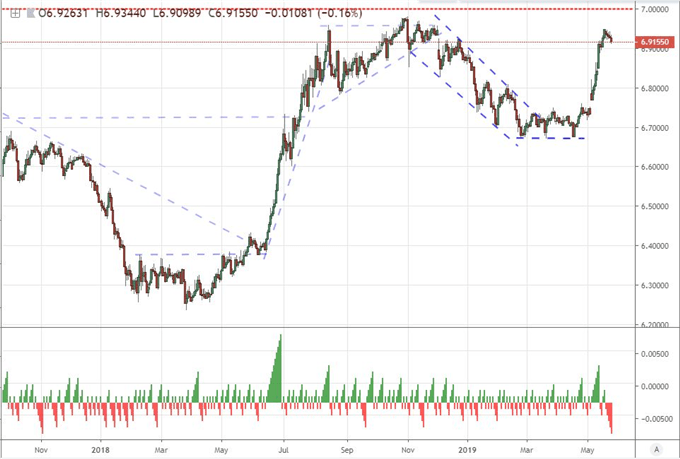 For top mover this past week, it was clear that the British Pound easily earned the status. The worst performing major currency by a mile, the Sterling managed to finally earn a bounce through Friday’s session. That was a long overdue bounce from an absolutely battered major. In fact, the late-in-the-week jump for the single currency represented the first time in 15 trading days that the EURGBP slipped – ending a record-breaking run. What is ironic is that this corrective effort occurred on the day that Prime Minister Theresa May announced her resignation. She will officially relinquish her position on June 7th. And, while there are certainly plenty of people that are relieved by the political turnover, this certainly wouldn’t count as a market improvement. This is added uncertainty and markets detest the unknown. 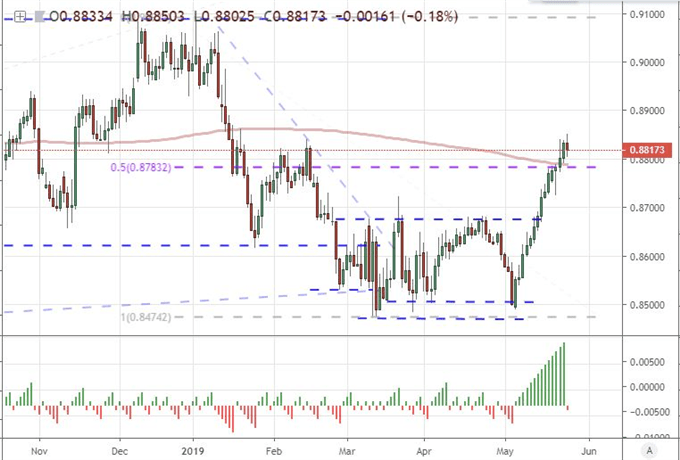 As we assess the Sterling’s intent in the week ahead, it is necessary to evaluate its unusual response this past week the May update. There is no small element of ‘sell the rumor, buy the news’ to this situation. The pressure for the PM to resign had built through the week and seemed to hit a fever pitch after she sought the opposition party’s support for her frequently-rejected withdrawal bill in exchange for a second referendum vote. The latter sessions of tumble from the Pound were no doubt a reflection of the escalating probability of her imminent departure. With a deadline to her leaving, Parliament in recess this week and the new leader likely to take some time to get up to speed; it is reasonable to expect the market could curb its climb and perhaps resort to range swings. That said, this path makes the troubling ‘no deal’ Brexit outcome more likely as the new leader of the Conservative Party is likely to be more aggressive, not less. Keep an eye on the Sterling and Brexit headlines.

Among the other currencies with fundamentally-derived market moving potential, the Dollar is perhaps the least overt in its intent. While there are some noteworthy data points – like consumer confidence and trade – the productive movement has resulted from systemic issues. Recognition of the United States’ position at the center of the trade war web is starting to sink in, but we are not yet to the point it is imminently recognizable and thereby overtly sensitive. In the absence of a deeper fundamental swell, the Greenback will likely resort to its roll as a primary counterpart to its liquid and active peers. The Canadian Dollar is more interesting for its targeted event risk. While the USCMA progress is of course important, the Bank of Canada (BOC) rate decision on tap is more reliable. The group has wavered in its policy commitment, but we haven’t see the hard turn to shilling rate cuts that we’ve seen from the RBNZ. If that is in the cards for the near future, the Loonie’s resilience will crumble. 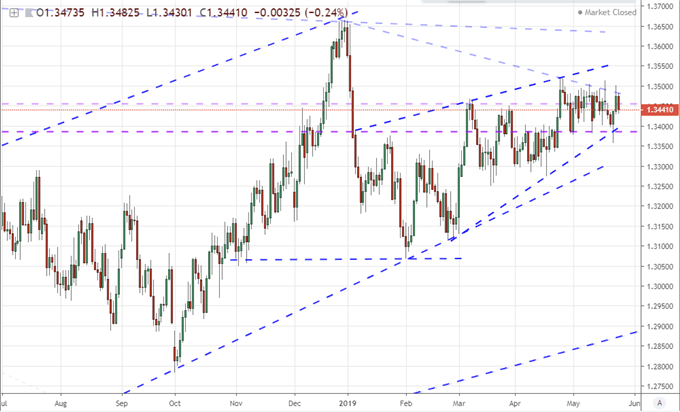 There is further considerable potential from the Australian Dollar and Chinese Yuan owing to trade wars as well as the Japanese Yen as wayward carry interest conforms to risk trends. However, the most remarkable potential in the FX market in my mind rests with the Euro. The world’s second most liquid currency has been carving out a trading range (on a trade-weighted basis) that is comparable only to the lulls of activity back to Summer of 2014. This is not comfort but rather anticipation. We are due results from the EU Parliamentary elections by Sunday evening. If this vote sees a significant rise in nationalist interests across Europe, it could raise the concerns over faltering collective growth that we have seen elsewhere. The more concentrated risk though would rest with the Euro itself. Nationalist interests general align or include a perspective that is anti-Euro. Even if there is no immediate pursuit of undermining the shared currency, the threat that it is a possibility under strain – say during a market wash where coordination is critical – trust in second most liquid currency will plunge. It would not be a stretch to believe a drop below parity (1.0000) for EURUSD could soon follow such an occasion. We discuss all of this and more in this weekend Trading Video. 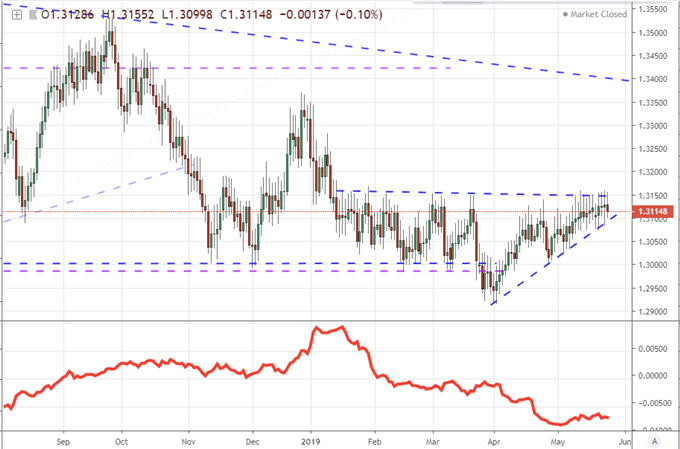