Anticipation of the Fed is Warping Market Activity, Ignorance of Trade Wars is Raising Risks

As usual, one of the best practices for analyzing the markets to start the week is to gain a bead on the big picture to establish what has the greatest potential of not just moving the market, but that which could keep it going. That is a truism that I believe in with both fundamental and technical analysis. From risk trends, we have a general buoyancy that was showing greater traction in certain areas such as rest of world equities (via the VEU ETF) and emerging markets, but my baseline for ill-gotten speculative appetite remains the S&P 500. The index broke through four-month long range resistance late last week, but there was none of the enthusiasm in follow through that you’d expect from such a move. We could perhaps excuse the absent flush on Friday from the dwindling hours of liquidity for the week. Stretching that pardon to Monday is not reasonable. There is considerable speculation built into Wednesday’s FOMC rate decision – and for good reason. The upcoming US central bank meeting is not just a decision on rates this month, it is the Summary of Economic Projections (SEP) that reflects the group’s expectations for the near future as well as Chairman Powell’s press conference which will more likely address plans to pull out of the quantitative tightening effort (reductions to the stimulus effort built up over the past decade).

If the markets are simply waiting the Fed’s actions, the potential for follow through in US equities will never likely reignite. The speculative charge from a technical break is usually built upon the recognition of the level and its collapse. Once the occasion passes, the need for motivation resets. We will consider more carefully the scenarios and potential for the Fed decision in tomorrow’s video, but the capacity for jump starting risk appetite through the promises of more accommodative monetary policy has seriously diminished. We can tell its fading influence over investor conviction via more recent efforts from the likes of the European Central Bank (ECB) and Bank of Japan (BOJ). At this point, the extremely tepid impact of further easy policy will likely be overridden by concern for *why* more easing is even necessary. In the meantime, interest in growth forecasts has cooled – much to the bulls’ relief – but growth forecasts from the Fed and Bank of England decisions as well as Friday’s PMIs will bring attention back to that general concern.

The most worryingly underappreciated threat is the trade war. Should they regain traction and spread to the developed world, it would very likely stall already-troubled global growth. Over the weekend, it was suggested that the Trump-Xi summit may not happen until June, a long delay from the initial suggestion for ‘end of March’. While this is worked out, there is a growing number of US businesses and groups warning over the impact that trade wars are having at home. The Association of Equipment Managers warned the economic impact will slowly pass through over the coming decade – much like Caterpillar’s $100 million personal 2018 impact. To keep the fire on, however, President Trump took swipes this past weekend at Google and GM, suggesting their lack of support for domestic business and benefit towards foreign interests. Attacking Corporate America is unlikely to result in much market optimism. 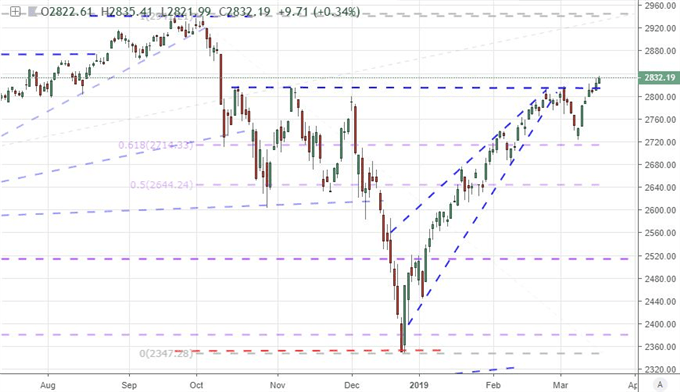 Outside of the systemic interpretation of risk trends and financial appetite inherent in the Fed’s intent to steer global monetary policy, there are very distinct implications for the US Dollar and local assets on the outcome of the two-day meeting Wednesday. If the policy authority downgrades further from its ’50 basis points worth of hikes in 2019′ consensus in December, the market will not be particularly surprised given the tone from the collective and most individuals over the past month – though a drop to median calling for no change would still catch the currency off-guard. On the other hand, if the group maintains a forecast for two standard hikes before year end, it would fully contradict the rate cut being priced in through swaps and the skepticism of any moves registered by Fed Fund futures out to December. We are very likely to see the market make no definitive call on this situation one way or the other until at least Wednesday, so that leaves the Dollar in a very precarious position. The DXY Index looks very close to the terminus of a tight range, but a break from that benchmark will likely push the market out to the broader barriers from the past 8-months: the 97.75 range high or the 200-day moving average support just short of 96. I am not even convinced that Wednesday’s event risk can resolve a clear trend even as EURUSD sports one of its narrowest 60-day historical ranges on record and it too is due a breakout – even if of necessity. Before this trigger, restrict expectations of breakouts and certainly imminent trends.

We find the Pound in similar – but significantly more troubled – waters. After the series of debates and votes in Parliament last week, it seemed that we were finally due some explicit course setting on Brexit and thereby dedicated bearings for the Pound. As a recap of last week’s trio of days, Prime Minister May’s proposal on Brexit was rejected on Tuesday, the possibility of a ‘no deal’ outcome was essentially written off and then May was tasked with seeking an extension on the Article 50 date from its initially-set March 29th deadline. What truly made things interesting though was the call for a third meaningful vote (MV3) on the Government’s Brexit plans for Wednesday, March 20th. The PM and others believed that the restricted range of scenarios would flip holdouts with perhaps enough support to pass the proposal. Whether it went through or not would dictate what May asked for in terms of additional time. Yet, before we could get there, the Speaker of the House of Commons John Bercow threw cold water on the notion when it announced the new vote would not be tabled unless there were significant changes. It is possible, though highly improbable, that she rouses enough change to qualify before Wednesday. This will set eyes on breaking news for short-term volatility but effectively undercut any meaningful effort to develop trends until we once again find the path out of the divorce. If you are looking for a systemic bear trend on EURGBP or a break above 1.3400/3500 from GBPUSD, it is best to truly weigh conviction. Range moves on GBPUSD or GBPJPY on the other hand may better fit the environment. 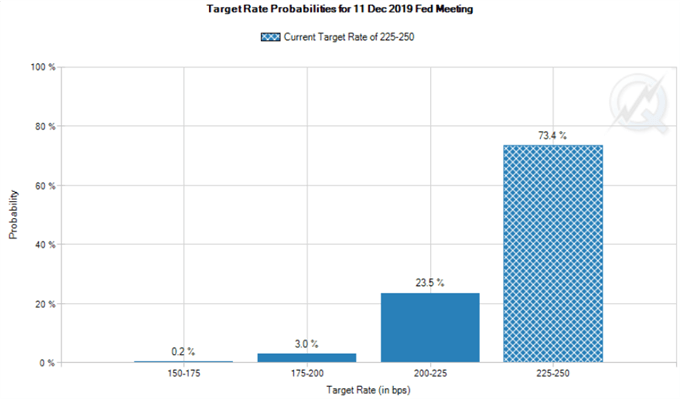 Euro Is Anchored By Others’ Drama, Aussie and Kiwi May Provide Volatility, Oil Pays Some OPEC Tribute

As the Dollar and Pound deal with their own high-profile concerns, it is natural that attention shifts away from other counterparts. However, I would argue the case for Euro volatility as it is inextricably tied into its counterparts’ health. As the second most liquid currency in the world, it is naturally a key counterpart to all major currencies. Add to that the Euro’s own exposure to a bad UK-EU divorce as well as the ECB’s serious contrast to the Fed in its monetary policy course correction, and it is clear that this currency cannot escape the vacuum around the markets. That EURUSD wedge may look exceptional, but a break of necessity does not ensure follow through. Expect this currency to pantomime for its largest counterparts and downplay key local event risk like the ZEW investor sentiment surveys – and perhaps even the March PMIs and EU Summit.

In contrast, the Aussie and New Zealand Dollars seem to have fully divested themselves from their macro roles as carry currencies and thereby high-level risk trend measures. That has certainly prevented these majors from productive trends lately, but it also means that common distractions may not stretch to this corner of the FX market. Instead, we may find local data offers more traction here, even if it isn’t full blown trend. The Kiwi Dollar has the more substantive docket from investor sentiment to current account to 4Q GDP ahead. Events like the RBA minutes and Australian jobs report are less loaded, but still effective with the proper outcome. Both currencies are sporting narrow ranges generally, but if you intend on pursuing, pick pairs that are not bogged down by cross winds (like GBPAUD or GBPNZD bedeviled by Brexit).

In other news, the commodity market is showing deference for OPEC headlines, despite a serious disinterest in the jawboning from the monopoly over the past months. Saudi Arabia over the weekend dropped not-so-subtle hints that it is ready to extend its production cuts through the second half of 2019 if the proper impact is not registered by their effort thus far. Russia (an ‘OPEC-Plus’ member) was not as ambitious, but it suggested it could keep restraints in place through June at earliest. That offered a little lift on WTI crude oil prices, but like the S&P 500, there is very limited run. Gold has steadied in both Dollar and multi-currency terms. That puts Gold bugs and has interested reversal pattern spotters, but I would suggest evaluating the situation from the perspective that the Dollar is a critical signal rather than trade candidate itself. We discuss all of this and more in today’s Trading Video. 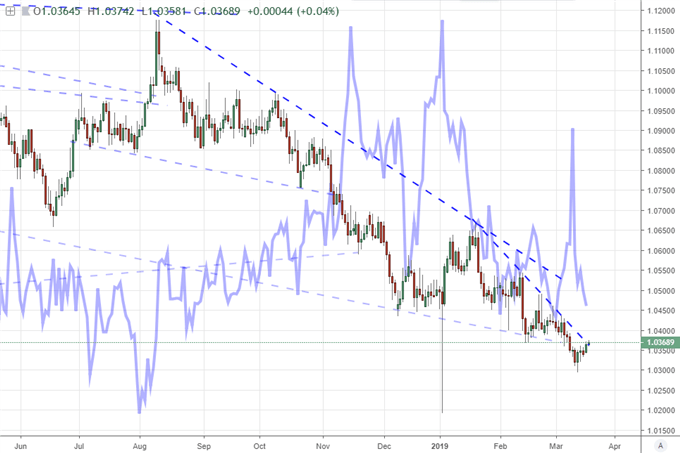