US stocks were weighed down by health-care, with UnitedHealth Group sinking to its lowest close in over a year. The company is a bellwether when looking at the US insurance field. Yesterday after their earnings reports, CEO David Wichmann highlighted concerns over “Medicare-for-All” which is a growing issue in the political landscape leading up to the 2020 US Presidential Election.

S&P 500 Weighed Down by Health-Care 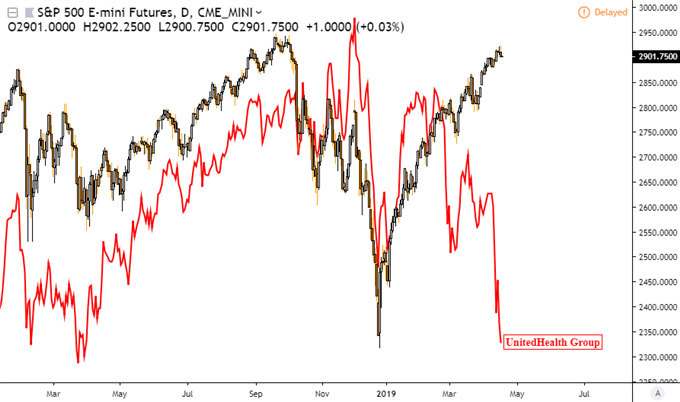 US front-end government bond yields declined alongside the S&P 500, suggesting that there was a bout of risk aversion. The highly liquid US Dollar appreciated, but it was not enough to counter earlier declines in the aftermath of better-than-expected first quarter China GDP data. The Canadian Dollar rose following a couple of upside surprises in local CPI statistics for the March period.

Ahead, the Australian Dollar will be looking towards March’s domestic jobs report. Lately, the Citi Economic Surprise Index has been suggesting that perhaps there may a rosy outcome. This is because Australian economic data has been tending to increasingly outperform relative to economists’ expectations as of late. However, the anti-risk AUD/USD’s upward price movement may be offset if Asia equities follow Wall Street lower.

Despite its downside performance on Wednesday, NZD/USD prices were unable to breach near-term support at 0.6706 on the chart below. This comes after breaking under a couple of rising trend lines, one from October 2018 and another from January this year (pink lines below). We are starting to see positive RSI divergence, which shows fading downside momentum. As such, NZD bears ought to proceed with caution.