The top fundamental themes were a mixed bag this past session, and we saw the result of that in a lack of commitment for risk assets as well as the diverse financial headlines through the day. Concern over the health of the global economy remains one of the most capable themes between the PMIs and sharp downgrade from the WTO’s forecast (3.7 to 2.6 percent) earlier this week, but no new kindling was added Thursday. Similarly, monetary policy had a few notable teasers between the ECB’s meeting minutes and President Trump’s most recent Fed criticism (attached to reports Herman Cain was going to be offered as a Fed board governor). The real systemic weight in the headlines this past session was behind trade war updates. Providing some favorable perspective, US President Donald Trump offered update on the negotiations with China. While he issued his standard disclaimers associated with tough dealing, he estimated an agreement could be reached in four weeks. We have seen explicit time frames like this offered up in the past readily broken or reversed before the deadline is even reached. Skepticism will likely prevent this loose speculation from offering material lift to the US markets on Friday’s open – especially with NFPs to distract.

To further offset any serious enthusiasm from developing around a US-China deal, the rhetoric from the President on Mexican relations took a turn to the explicit. While the threat of an imminent border closure was pushed off, Trump said the country could shut the border and/or apply auto tariffs to Mexican-made autos and parts if their southern neighbor didn’t satisfactorily stem the tide of illegal immigrants and drugs into the US. The implications for growth and USDMXN are one matter. Far more disconcerting should be the revived threat of auto import taxes which the administration is still considering for all foreign made cars. For this fundamental mix, we shouldn’t see a clear reaction from risk trends. The Dow managed to overtake 26,250 but the move inspires little technical confidence for follow through – especially while the S&P 500 posts another markedly restrained day, actually an ‘inside day’ to add a little more temptation to those constantly seeking reversal. We have relative pressure built up on other speculative assets from global shares (VEU) to emerging markets (EEM) to commodities (Dow Jones Commodity Index), but we shouldn’t assume follow through even if we do register some technical break. In the meantime, as connection between speculative performance ties closer to economic potential, I will keep a closer watch on government bond yields. 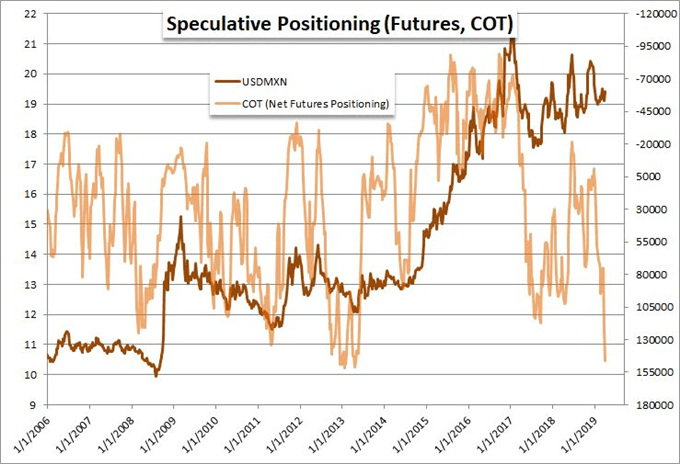 A focal point for relative growth, monetary policy and trade tensions; EURUSD refuses to commit to a definitive view on which of the two largest economies in the world is in better fundamental standing. The unmistakable pressure on 1.1200 – major 61.8% Fibonacci retracements from the 2015-2018 range as well as the lifetime range of the Euro – faltered with the pair recovering some ground these past 48 hours. That said, the bounce lacked any depth of conviction even to move within a well-established range. That range, by the way, is historically one of the smallest in the benchmark pair’s record. A break is inevitable, but what instigates the move remains frustratingly unclear. If we were to turn the temperature up on growth troubles, tepid and ineffective monetary policy, and applied a trade standoff between these two superpowers; the Dollar would likely come out on top. Yet, where do we go short of a fully charged escalation on any or all three of these issues? One thing is certain: if EURUSD starts committing to a clear direction, expect it to have sweeping influence over the entire FX market and likely the global financial system.

In contrast to the EURUSD’s loaded position, the USDJPY has increasingly slipped under the radar. The pair is arguably the most prominent, liquid carry trades; but its lack of response to risk trends these past months has tempered the market’s interests. In general, there is a similar contrast between the Japanese and US economies as there is Europe’s and the US; yet there is far less fundamental concern attached to the BOJ’s extreme policies, Japan’s dalliances with negative GDP and the open threat of US tariffs on Japanese autos. That said, there are some remarkable background readings starting to arise around USDJPY. While I don’t think it is a reflection of fundamental issues, there is nevertheless an extreme contrast in views from expected volatility and retail positioning. For implied (expected) volatility, the CBOE’s USDJPY measure dropped sharply this past session to a series low, suggesting there will be little-if-any meaningful movement from this pair over the coming month. That is extreme given this pair is not far removed from risk trends. Perhaps a related measure, retail FX traders have dramatically increased their short interest in the specific cross. While the novice-skewed market participant type prefers clear technical boundaries and attempts reversals virtually anywhere, the activity levels nor activity level seem to suit their typical appetites. Keep tabs on this pair. 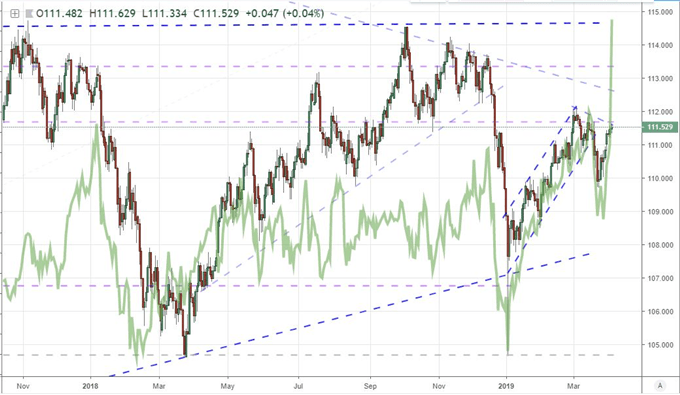 Looking out over the final session of the trading week, it isn’t difficult to spot the potential top headline. Though there is always the possibility that we will see a growth warning or trade war threat come out of the blue, there is very distinct update due in the form of the US labor report for the month of March. Following the sharp miss from the nonfarm payrolls (NFPs) last month and the 18-month low in the ADP private payrolls figures earlier this week, the market’s will be on edge. It is easier to impress given the circumstances, but the probability is for a weak showing. The question traders should ask is what fundamental theme this data will stir. The Fed’s intent for monetary policy has taken a clear turn to neutral over following the last rate decision and its accompanying Summary of Economic Projections (SEP). With the central bank projecting no changes to the benchmark range through the end of the year, it would take an exceptional inflation pressure (including wage growth) to revive hikes and the threshold will be high on the employment side to justify actual rate cuts. That said, the implications for economic activity for the world’s largest economy will be more immediately tangible from this employment report. Rather than move the market’s needle on rates (Fed Fund futures and swaps are already pricing in a 2019 hike), traders should be mindful of a shortfall reviving growth concerns – an issue for both the Dollar and general risk trends. 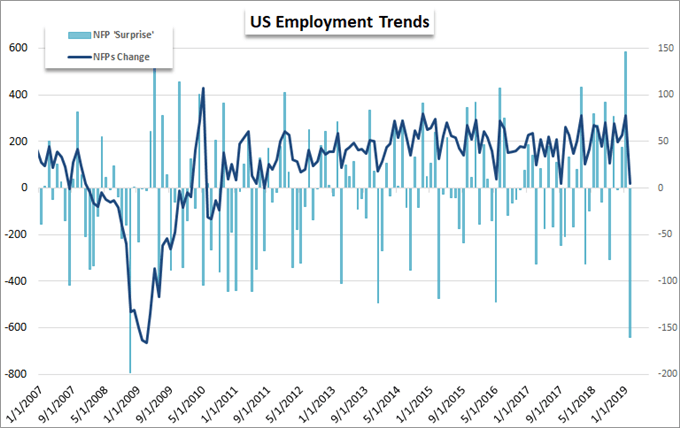 While the US NFPs is far-and-away the top event risk on tap over the coming session, fundamentally-aware traders should not restrict their interests to just the Dollar’s circumstances. The Pound is a currency that is constantly on the lookout for ‘expected unexpected’ headlines. The Brexit updates this past session offered little progress on the wayward proceedings of the EU divorce. UK Prime Minister Theresa May met with opposition leader Jeremy Corbyn with both sides suggesting progress was made but neither issued any concrete plans. The initial EU-set deadline is a week away and there hasn’t been an approval to delay that date as of yet. More definitive in release time is the Canadian employment report. While this is a far more restricted fundamental update, it is a fairly reliable volatility charge when there is at least a moderate level of surprise. Depending on the outcome of the data, USDCAD may prove the most volatility-stricken pair to end this week; but my interests run more along the lines of EURCAD and AUDCAD. We discuss all of this and more in today’s Trading Video.