A Technical Break, A Conflicted Fundamental Conviction and Deer in the Headlights

The S&P 500 and Dow – benchmarks for speculative appetite – produced an unmistakable technical break of their aggressive two-month rising wedge patterns. Yet, a break does not guarantee follow through; and the lack of any traction from these indices is great evidence to exactly that axiom. In fact, the day after the technical cross was made, the S&P 500 has put in for the smallest daily ranges since September 25th – before the market’s most recent bout of action. Some may say that systemic fundamental developments are beating back a more painful collapse in the capital markets, but I believe this inaction is an affliction to both bullish and bearish interests. The back down from the parties in the US-China trade war is a story that is not even a week old, and yet the market seems to have already adjusted for the very tepid enthusiasm it is able to muster.

This past session, the US Trade Representative’s office said it was dropping the threat to increase tariffs on those Chinese goods saddled with the tax from 10 percent to 25 percent “until further notice” at the direction of President Trump. That confirms earlier rumors but certainly raises the probability that a deal is soon at hand. What more could we expect from this node of fundamental interest to spur further gains? It isn’t even clear that an unmistakable end to the economic standoff could earn more optimism from the markets, and that is unlikely to happen. In the wake of disappointment for a market expecting more optimism – especially as it is the prevailing theme these past few months – skepticism starts to rise around other, unresolved fundamental issues.

Global growth is one such concern with the range of GDP updates this past session and a downgraded forecast for 2019 and 2020 from Moody’s. Monetary policy is another consideration for which doubt is gaining dangerous ground with so little capacity by the largest players to fight any future fires. In my book, the least appreciated extended leverage risk is that held by the governments. The US debt limit is technically met today, but there are means to cobble together financing to pay maturing debt. That, however, doesn’t earn much more confidence from a market questioning the long-term position of the USD against constant budget fights, regular trade conflicts and a general global interest to diversify risks. 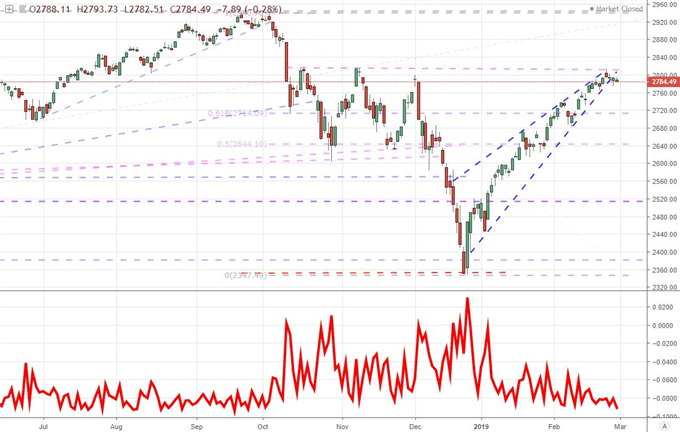 How Long will Dollar Rise on GDP and Pound on Tempered No Deal Risk?

If systemic themes are unable to catch traction, at least there are sparks flying that are generating volatility. And, it should be noted that when a trend eventually does take, it will likely begin through a strong jolt in price action. For regional risk and FX response, the most prominent listing this past session was the US 4Q GDP release. This reading was delayed owing to the 35-day partial federal government shutdown, so the figure were presented with was a combination of both the ‘advanced’ and secondary readings. If we are setting the measure to the lowest possible boundary, the 2.6 percent pace beat the 2.2 percent forecast. Consumer spending offered slower growth than expected (2.8 percent), net trade was a draw owing to a faster increase in imports and residential investment dropped 3.5 percent. Ultimately, 2018 experienced a 2.9 percent run of growth – right in-line with Fed Chairman Powell’s expectations.

Where US equities didn’t respond to the move, we did see a Dollar. That is a reasonable response but expecting follow through from this otherwise modest and discounted update is expecting too much. Perhaps the update from the Fed’s favorite inflation figure – the PCE deflator – or the ISM manufacturing activity report Friday can generate more reliable motivation. Meanwhile, the Sterling’s Brexit climb seems to have reached a temporary saturation point. Whether the currency’s climb is only taking a breather or is preparing to turn remains to be seen, but we have already technically cleared some of the most important resistance across GBPUSD, EURGBP and GBPJPY this week.

The relief from a sense of imminent doom of a ‘no deal’ Brexit that the BOE, Government and IMF have warned against has already spread across the market. Yet, does that also mean its been fully discounted? There are good arguments to be made on both sides of the argument, but sheer speculative positioning via the CFTC’s COT futures report suggests there isn’t an overwhelming hedge that needs to be covered and thereby boost the GBP further. I have a bearish bias, but patience is the principal virtue. 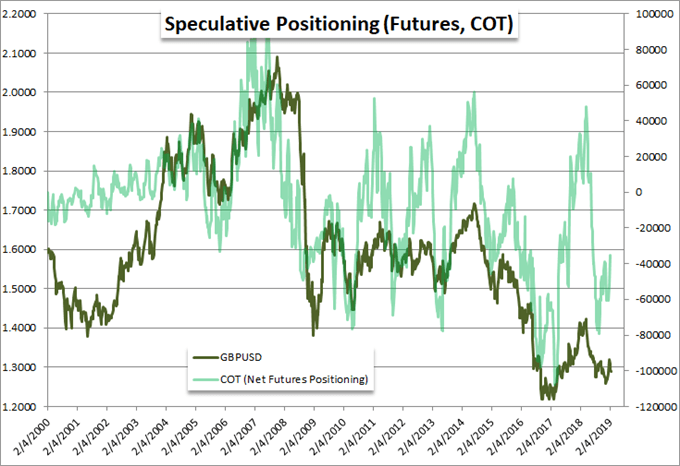 Will the Loonie, Franc, Kiwi or Commodities Make Anything Out of Their Volatility?

Where the big and anthemic currencies are struggling to give clear readings, there is at least some movement from some of the other top liquidity players. The Swiss franc was unexpectedly the biggest mover on the day. Some activity was not completely unexpected given the Swiss 4Q GDP release, but the disappointing 0.2 percent quarter and 1.4 percent pace fell short of expectations. What does that mean for tentative technical breaks like those from CADCHF and AUDCHF? Friday will be important to establish a true commitment or reversion to a familiar environment. There is little on the docket ahead upon which to anchor momentum.

The same lack of fundamental follow through will register with the New Zealand Dollar which was burdened by a deep dive in business confidence and 4Q terms of trade. For the likes of NZDUSD and NZDJPY, ranges may hold. In contrast, the Canadian Dollar advance was split by a 4Q current account deficit that swelled to C$15.5 billion and a jump in business sentiment. Ahead, the December GDP update will round out the fourth quarter and offer a singular focus for the Loonie to latch onto. Whether it is a significant enough reading to prompt a break from the likes of the USDCAD.

In commodities, headlines for crude oil that the US Department of Energy was willing to release 5 million barrels from the Strategic Petroleum Reserve was met with little more than a shrug – even more so than President Trump’s tweet or OPEC’s push back. Gold on the other hand is putting more substantial pressure on the its own aggressive trendline support as some of the more open-ended risks seem to recede. We discuss all of this and more in today’s Trading Video. 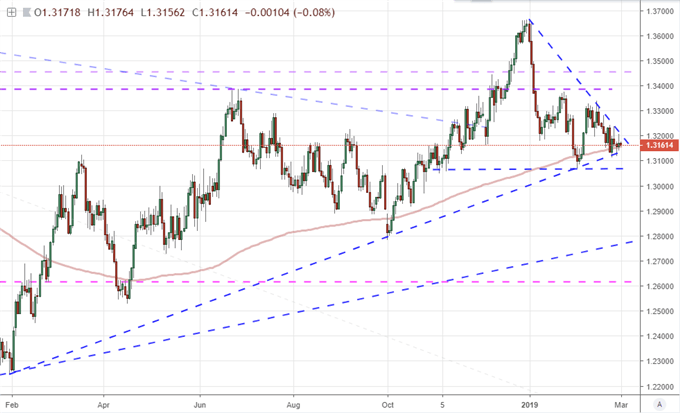