Has the move to defuse one of the world’s most amorphous and volatile threats saved the markets from an imminent technical reversal? The S&P 500 and Dow Jones Industrial Average took a technical stumble Wednesday that could readily qualify as the first step into a reversal when both dropped through support for aggressive, rising wedge patterns. The pace and consistency behind these indices’ rise these past two months not only defies the very prominent uncertainty found in the fundamental backdrop, but it was a direct contrast to the far more restrained pace in other risk-guided asset classes (global equities, emerging markets, junk assets, carry trade, etc).

There is a considerable list that can be drawn upon to justify a reversal, but complacency has a way of rising at the most convenient of times. The tentative spark for the tempting reversal pattern offered no follow through and had fairly weak ‘breadth’ across other speculative benchmarks. The headlines this past session probably had a lot to do with muddling intent. During the US session, there were three simultaneous testimonies taking place. Former Trump Lawyer Michael Cohen’s answers were high drama, but political stability fears is not presently an active market concern. Fed Chairman Jerome Powell had his second day before Congress for his semi-annual update. His insights didn’t change much from day one, though he suggested a decision on the balance sheet could be coming soon.

US Trade Representative Lighthizer touched the more exposed nerve when he suggested the US-China negotiations were not complete, but that his department would soon officially take down the March 1st deadline for the tariff hike on the trade partners’ $200 billion in goods. The question now on traders’ minds – or it should be – is how much ‘relief’ rally is left in this theme? If there were an unambiguous deal struck with China and President Trump dropped all pretense of a possible auto tariff, we could perhaps squeeze further advance out of the market. Yet, we are unlikely to see anything that clear. Watch the US indices’ charts closely. 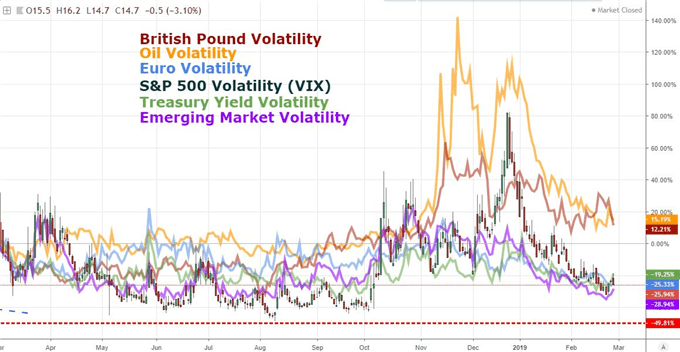 Another advance that has earned clear technical progress and has its rooting in fundamentals was the charge from the Pound. The currency advanced across the board Wednesday, but the tempo was notably more restrained than what we had seen the day before. Nonetheless, the extension earned a loaded GBPUSD advance through 1.3300, an extension of the EURGBP’s larger bearish reversal and tentative technical clearance for crosses like GBPJPY and GBPCAD. For the market participant starved for volatility and moves with greater reliability for follow through, this is a very tempting picture. However, I personally defer to general market conditions when seeming ‘exceptions to the rule’ seem to pop up and tempt my speculative appetites.

The reason this bullish push looks more reliable is the headline fundamental support it draws as a natural ‘justification’ for those simply pining for more productive markets. The session in Parliament Wednesday was significantly downgraded in terms of importance when Prime Minister Theresa May announced she was moving the ‘meaningful vote’ on a possible Brexit proposal out to March 12th. With this push, UK politics would not find their definitive call on forcing next steps. However, the day was not completely spent for potential. In fact, the amendments that would be addressed in the Commons carried a particularly important update that would significantly reduce the spectrum of risks surrounding the UK’s divorce from the EU.

The Cooper amendment passed 502 to 20, essentially forcing what was suggested by the Government that in the event that the proposal was rejected on March 12th that May would in turn start the process to delay the March 29th Brexit date. There are still risks and unknowns factored into this situation, but it materially reduces the risk of an economically-painful ‘no deal’. Whether or not the Pound continues to advance in the interim though is a question of how much of a discount there is still built into the Sterling with this ‘confirmation’ of a softening on the UK’s position in the negotiations. Again, I would defer to general market conditions with skepticism of follow through and favor for evidence that a fade effort was finding traction. 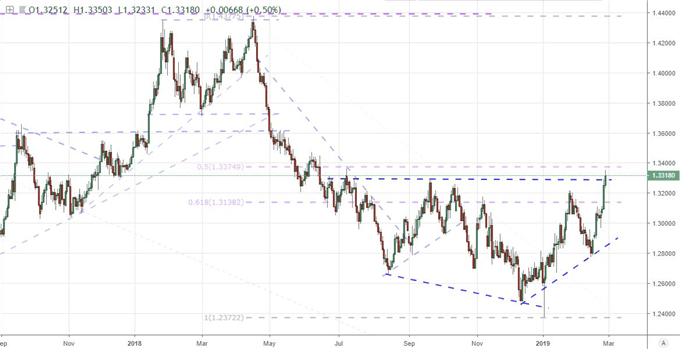 Top Event Risk Ahead Goes to the US GDP Release, But There Is More on Tap

With themes like the trade wars and Brexit actively crowding out the headlines, it is easy to overlook one of the more mundane (but ultimately crucial) fundamental themes simultaneously unfolding: growth. That will likely change today however with the United States due to report its delayed 4Q GDP update. Economic activity has been covered extensively these past weeks and months whether through rest-of-world official readings, timely proxies like PMIs, troubling forecasts from officials (IMF, central banks, governments) and sentiment surveys. The view is not an encouraging one.

With the world’s largest economy reporting its official growth update, we will have a definitive sign post for the world’s economy. So, where this has implications for the relative appeal of the Dollar (via Fed potential) and US assets; it will also serve as the baseline for a very prominent divergence between tangible economic activity and indulgent speculative positioning. The US isn’t the only country updating on growth. Hong Kong – a proxy for China – reported its economy slowed from a 2.9 percent annual pace in the third quarter to 1.3 percent in the most recent reading.

Alongside the US figures, we are due Swiss, Indian, Brazilian and the French final report. Though less potent, traders have a few other currencies/regions to track for volatility. The Euro is heading for regional employment and inflation figures after in-line sentiment surveys. The Australian, Canadian and New Zealand Dollars are facing less extreme data but the technical positioning of the crosses and the concentrated potential of the updates could trigger range swings or even limited breakouts. We discuss all of this and more in today’s Trading Video. 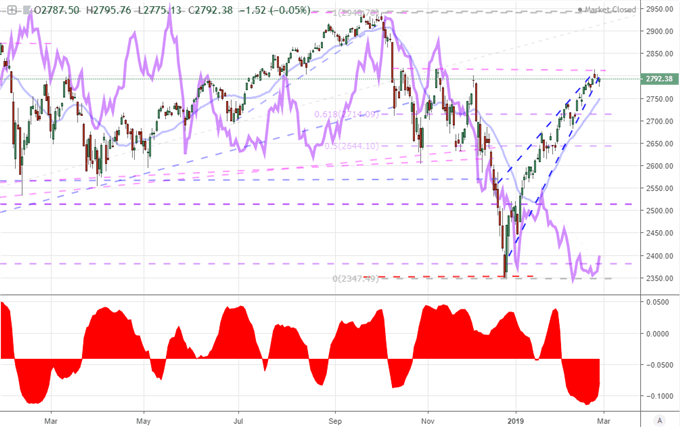