As a reminder, Japanese and Chinese bourses are offline for holidays which narrows the scope for a full bird’s-eye view of FOMC aftermath. Those in Australia and South Korea are open however.

In the former, the benchmark ASX 200 index traded about 0.7% lower heading into the close. Westpac Banking Corp. shares weighed against financials which account for roughly a third of the index. Meanwhile in South Korea, the KOSPI traded about 0.45% higher.

While equities were mixed, looking at foreign exchange markets revealed cautious optimism. This is because the anti-risk Japanese Yen aimed narrowly lower while its pro-risk counterparts, the Australian and New Zealand Dollars, traded little higher.

Newswires attributed the mixed mood in stocks to the latest update on US-China trade talks. A report from CNBC crossed the wires that hinted of a deal between the two nations to come by next Friday. This may have muted downside reaction to the Fed.

S&P 500 futures are now relatively flat which suggests that significant downside follow-through in European shares might be absent. Later in the day, keep an eye out for potentially soft US initial jobless claims. Last week, a disappointing outcome triggered a bout of risk aversion.

Looking at futures to show after-hours trade, the S&P 500 formed a Bearish Engulfing candlestick as it failed to find follow-through on closing above the record highs in September. Given confirmation via further closes lower, this may precede a turn lower.

Furthermore, there appears to be a break under the Rising Wedge bearish formation. Meanwhile, sentiment signals still offer a bearish contrarian trading bias. In all, this places the focus on near-term support around 2900. 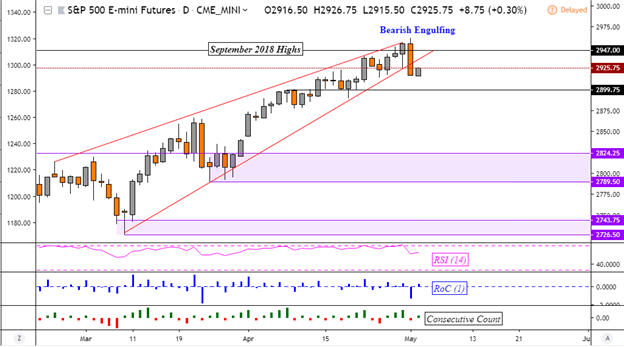