See how retail traders positioned in EURUSD’s failed break, GBPUSD as volatility rises, S&P 500 as it threatens a drop along with the rest of the FX majors, indices, and oil intraday using the DailyFX speculative positioning data on the sentiment page.

Traders carried a sense of anxiety into the weekend. The threat of volatility transitioning into clear risk aversion heading into the new trading week is uncomfortably high between active thematic risks and a technical swoon across a range of markets that tend to align when sentiment itself is in control of capital flows. Considering the markets dictate what is important, it is worth considering the technical position we face entering the new trading week. To close out this past week, the seemingly relentless US equity market finally took a serious hit Friday. The S&P 500 leading the initial charge suffered its biggest single-day loss since January 3rd and subsequently slid back below 2815 – the range high between October and this past week that it took so much enthusiasm to overtake in the first place. When establishing conviction, there is considerable value in keeping tabs on the leaders (and US indices have certainly paced risk appetite); but there is greater reliability to be found in correlations between assets otherwise unrelated but for something as elemental as sentiment. That said, the VEU (global equities excluding the US), the EEM emerging market ETF, the HYG junk bond ETF, Treasury yields and even the Yen crosses took a hard drop through Friday. This was only a single day’s move, but it was broad and intense enough to be on guard for next week. 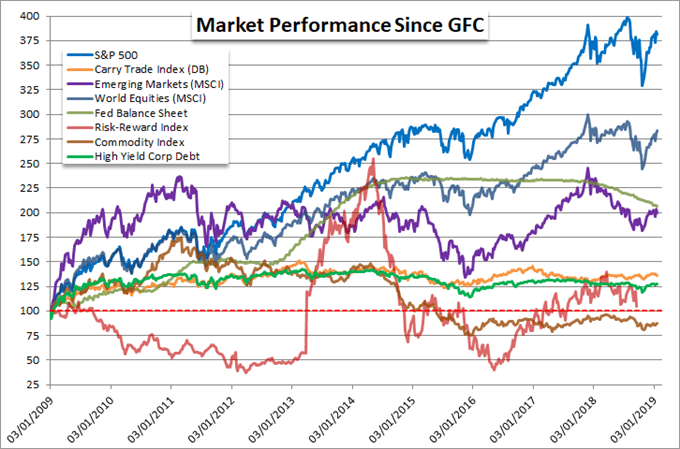 Whether or not the markets commit to a broad deleveraging will likely depend on what kind of motivations converge into a singular intent. On that front, there is no shortage of themes. We have seen the leading headline rotate fairly often over the past two weeks, but it has generally kept to three major considerations. The unmistakable souring in negotiations between the United States and China to steer out of the trade war has been an abstract erosion in investor confidence, but the gains made around its previous improvement added tangibility. The same is true for the state of monetary policy and its promise (or lack thereof) for the global economy. When the Fed made clear that it was joining its largest peers in moving away from normalization – by cutting forecasts for any 2019 hikes and setting out the timeline to level out the balance sheet – it was a move that most traders would recognize as a spark for further systemic gains from the past. Little of that enthusiasm was present this time around which swings a troubling spotlight on the effectiveness of stimulus to effect economic recovery and speculative gains. Lifting the veil of hope in external benefactors, the market naturally starts to reassess foundational problems like the state of economic activity. Friday headlines trumpeted a fear of recession with even the mainstream outlets discussing the wonky Treasury yield curve inversion (the first flip for the 10-year / 3-month since 2007). It is true this has frequently aligned to recessions in the past, but the timeliness of the indicator and prolific effort of the central banks don’t make for a very precise indicator. Growth fears will be a key factor into the coming week – whether the intensify or ease – but there will also be a not-insignificant focus on political risk. That said, be sure to separate the high drama from the market implications in the certain cacophonous chatter around the release of the Special Council’s findings in its investigation into possible Russian interference in the US election. 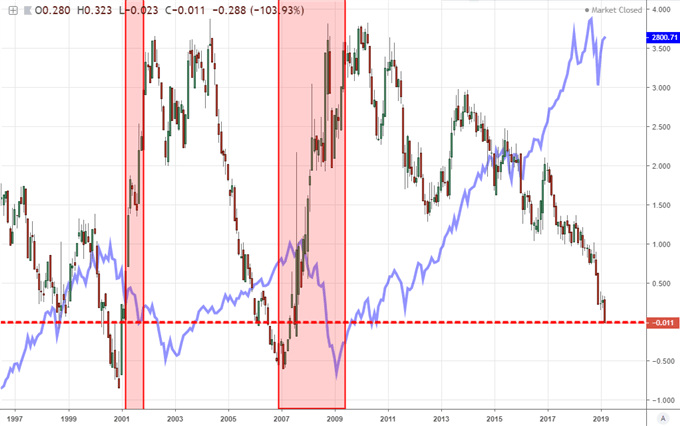 Dollar, Euro and Pound – Opportunity Does Not Necessarily Favor Liquidity

In general, it is important to favor liquidity in the markets to avoid unforeseen risks. In fact, when risk aversion rises, capital tends to flow towards deeper markets. That said, there are sometimes caveats that draw unique risks to even the most liquid assets that can flip speculative polarity on anything short of extreme deleveraging. At present, the three most heavily traded currencies in the FX market are hosts to substantial systemic troubles that will at the very least distort their normal alignments through the immediate future. We start with the Dollar. The ubiquitous safe haven has not played a clear risk on or risk off role these past months with a general drift higher that seems to draw an unusual positive correlation to the S&P 500. This is in part due to the currency’s role as a preferred carry after three years of the Fed’s tightening regime. This complication between the benchmark’s standing in the risk spectrum likely finds the Greenback under pressure should sentiment rise, falling in moderate levels of risk aversion and reverting to the ‘only option’ in panic. With the US emanating its own economic concerns, at the center of numerous trade/diplomatic scuffles and seeing an unmistakable rise in political uncertainties; it is not the ‘haven in all weather’ that it is often billed as. 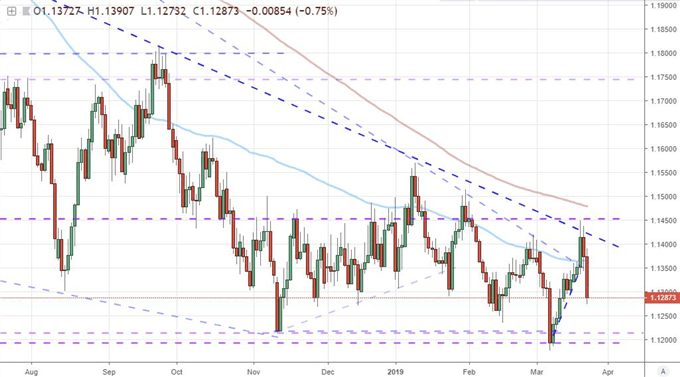 While the Dollar will find it difficult to establish a meaningful trend without sizable shifts in the fundamental landscape, the British Pound is the quintessential land-locked currency. Brexit remains the central focus for the Sterling and the future is as unpredictable now as it has been at any point over the previous two years. The EU Summit agreed to UK Prime Minister May’s request for a delay to the official Article 50 end date (March 29th), but that does little to resolve the fundamental differences between the two parties to the divorce. Friday remains an important day as the PM has until then to pass the withdrawal proposal (which the EU said would not be changed from November) to establish what kind of timeline we will have for an extension. It is very likely that headlines stir volatility at some point during the week, but with a key date in Friday and anticipation for another two months of negotiations will work against any reliable Pound trends. As for the Euro, it is not looking at the same acute threat as the Dollar or Pound but it shares in the same wash of economic health, diplomatic troubles (Brexit, US trade) and monetary policy uncertainty. Friday alone, the Euro took a sharp dive to once again return to heavy support on my equally-weighted index. There is considerable premium for this currency to bleed and that is as much a risk as any specific catalyst in the wings. If we are awaiting our bearings from risk trends and the major currencies are deviating from their textbook roles in the liquidity scales, then where should we look for calm and where for safety? In the FX market, there are some interesting options to consider that can more freely move without oppressive anticipation keeping the market anchored or distorted. The Swiss Franc remains an interesting case whereby its connections to mainland Europe and its uneven safe haven status find a more sensitive balance. This is a more pliable currency that can make a better counterpart to a motivated move where many others could actively counteract developments. The commodity currencies are also uniquely unmoored from issues that would normally be their prime motivator. The Canadian Dollar has data like the trade balance and monthly GDP ahead, but that is hardly the systemic threat of a Fed decision and there isn’t a strong risk or monetary pull here. The Australian and New Zealand Dollars are offering more technically-loaded pictures, but what would motivate intent is a difficult question to answer. These currencies are not responding to risk swings these past months and rate speculation seems all but frozen. That said, pairs like AUDNZD, AUDCAD and NZDCAD could cater to their relative nuance while events like the RBNZ rate decision can stir at least short-term volatility.

Considering our environment these past months, it is worth establishing what constitutes a reliable safe haven. That is very likely to depend on the intensity of sentiment trends, but the moderate levels that we have witnessed in recent weeks would favor the Japanese Yen in the FX market and gold in commodities. When market participants’ confidence flags, the first step is to unwind risk exposure which then turns into an absolute flight to safety whereby capital preservation overrides any interest in relative returns. Carry trade in the Yen crosses reflect that first stage. There has been very little carry to speak over the past decade, but the reach for yield fostered by moral hazard has leveraged appetite over practicality. If any of the localized fundamental risks set the majors into retreat – USDJPY on Fed stimulus rumors, GBPJPY on Brexit fallout, EURJPY with recession risks – the Yen both a carry and liquidity benefactor. That said, the more we find sentiment rooted in concern over recession and/or the recognition to the limits of central bank support, the more aggressive the need for an alternative to traditional assets will be. In that environment, gold is one of the few bastions against the unknown that has stood for millennia. We don’t have to look that far back to establish its fitness to these needs, however, as it was clear between 2009 and 2011. We cover all of this and more in this weekend Trading Video.