The UK economy grew 0.5% on a month-on-month basis in January, beating expectations of 0.2% growth and sharply higher than December’s negative 0.4% print. On a rolling three-month basis, the economy grew by 0.2%, the same rate seen in Q4 2018.

According to Rob Kent-Smith ONS head of GDP, “Across the latest three months, growth remained weak with falls in manufacture of metal products, cars and construction repair work all dampening economic growth. These were offset by strong performances in wholesale, IT and health services. This sluggish growth came despite the economy bouncing back from a weak December.”

UK production picked up from a dire set of figures in December but remained in negative territory on an annualised basis.

Sterling remains on edge, waiting for Attorney General Geoffrey Cox’s verdict on the UK’s ‘legally binding’ changes to the backstop, agreed between UK PM Theresa May and Jean-Clause Juncker late Monday. Sterling jumped sharply after these changes were announced yesterday but the British Pound is fading as markets wait for the legal judgement.

GBPUSD implied volatility also surged to its highest level in nearly three-years, implying a move of 163 pips in the session. 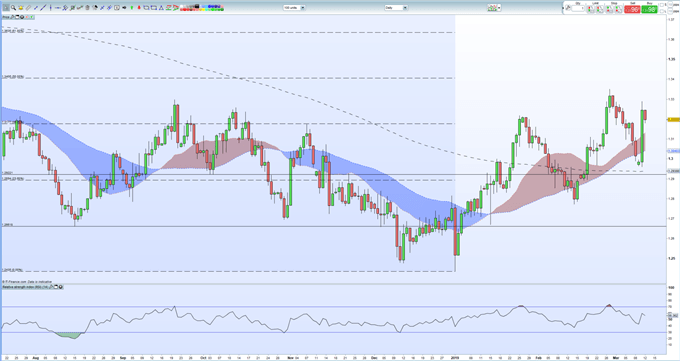 Retail traders are 60.4% net-long GBPUSD according to the latest IG Client Sentiment Data, a bearish contrarian indicator. Recent changes in daily and weekly sentiment however currently suggest a mixed trading bias for GBPUSD.

What is your view on GBPUSD – bullish or bearish?? You can let us know via the form at the end of this piece or you can contact the author at nicholas.cawley@ig.comor via Twitter @nickcawley1.