The latest Markit UK PMI confirms that expansion in the manufacturing industry is continuing its slowdown as February’s figure just managed to remain above the contraction line as it suffers a decreased from the previous months figure of 52.6, which saw a 3–month low. The GBPUSD saw a marginal push upwards testing the 1.3250 line. The pair has been trading a little softer for the latest part of the week as stronger than expected US Q$ GDP figure and Fed announcements kicked in the dollar buyers.

Another Confirmation that UK Growth is Slowing

This figure is the latest of a series of reminders that growth in the UK, and in the Eurozone, is facing a continued slowdown amid growing concerns about global trade and economic conditions. Figures published by the Office for National Statistics (ONS) showed that the British economy last year grew at its slowest rate since 2012, growing 1.4% in 2018, down from 1.8% in the previous year. Earlier this month, GDP forecasts for 2019 were downgraded to 1.2% from 1.7% by the Bank of England, the slowest growth forecast since 2009 when Europe was in a recession. On top of that, figures published earlier this week show that British business sentiment is at its lowest since 2013, being the services sector, Britain’s leading economic sector, the one that has been most negatively impacted in terms of sentiment, most likely due to Brexit concerns.

Is Brexit to Blame?

Brexit is one of the suspects behind the slowdown in the British economy. Major investments are being halted and companies are stockpiling due to the uncertainty about the future of Britain. Adjustments and preparations for a possible no-deal Brexit have shifted company focus from finding profitable investment opportunities to running risk-scenarios to mitigate the uncertainties about the future of their operations. That said, concerns over global growth and trade conditions have also had a big impact on the UKs economy, as other major European countries and global economies are also experiencing slowdown in growth.

Interestingly, despite Brexit concerns, consumer confidence in the UK has managed to pick up in the month of February, as figures released by Gfk showed that its consumer confidence index was up by one point to -13. Comments made by Gfk strategy director Joe Staton suggest that despite people viewing their personal finances to be a bit better, the continuing negative sentiment towards the economic situation could damped consumer confidence in a post-Brexit storm.

Volatility is expected to increase for GBP pairs when Parliament hold crucial votes regarding the future of Brexit. As of now, these meetings are forecasted to take place between March 12 and March 14, but comments made by Commons leader Andrea Leadsom suggest that Theresa May might be planning to bring the votes to Parliament before then, even as soon as next week. 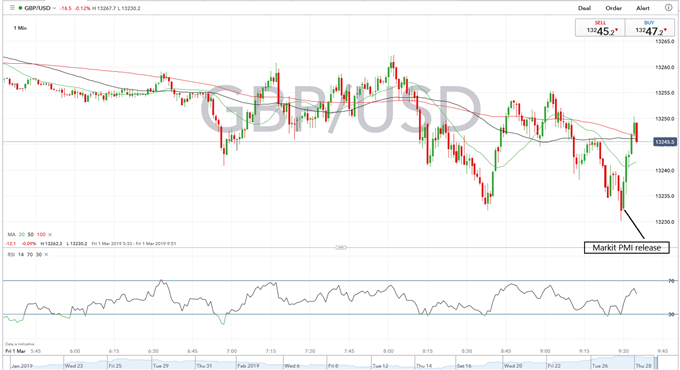 IG Client Sentiment – Retail trader data shows 47.2% of traders are net-long GBPUSD with the ratio of traders short to long at 1.12 to 1. We typically take a contrarian view to crowd sentiment, and the fact traders are net-short suggests GBPUSD prices may continue to rise. Positioning is less net-short than yesterday but more net-short from last week. The combination of current sentiment and recent changes gives us a further mixed GBPUSD trading bias.