British MPs gathered once again in the House of Commons for a third consecutive day of Brexit votes. This time, Parliament set out to decide on revoking Article 50 which would prompt the government to request permission from the European Union for a delay to quickly approaching Brexit deadline that is only 15 days away.

Four separate motions were selected to vote on that aimed to amend Prime Minister Theresa May’s call to push back the Brexit date. Amendment H, which called for an extension to hold a second referendum, was called on first but only 84 MPs voted in favor while 334 opposed.

Amendment I was second up for vote and which also failed but by a much tighter margin with 311 ayes and 314 noes. Thirdly, Jeremy Corby’s Amendment E was shot down with 318 voting no and 302 voting in favor. Amendment J which would have prevented a third meaningful vote over the PM’s Brexit deal was tabled shortly after.

Despite the failure of the amendments, the government’s main motion to revoke Article 50 passed with an overwhelming 412 to 202 majority. Markets largely expected MPs to vote in favor of a Brexit delay headed into today’s session. Parliament is now expected to hold another vote next Wednesday as the UK government scrambles to find enough support for its Withdrawal Agreement. As the Prime Minister stated yesterday, the legal default is a hard, no-deal Brexit if a deal cannot be agreed upon before the deadline. 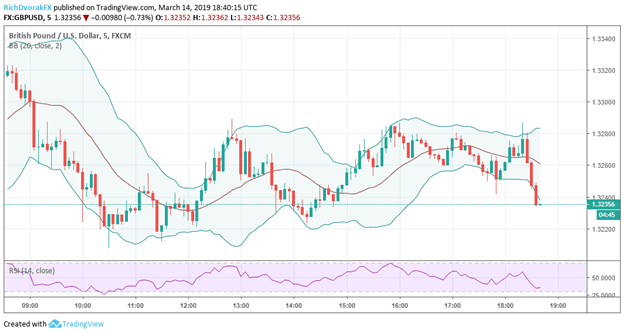 –British Pound – What Every Trader Needs to Know