The ASX 200 has still failed to push on past its previous significant high but, nonetheless, a look at the daily chart suggests that it’s still the bears who have it all to prove.

The Sydney stock benchmark may be making heavy weather of resistance at 6284.6 which was the intraday high of March 7 and 2019’s peak so far. 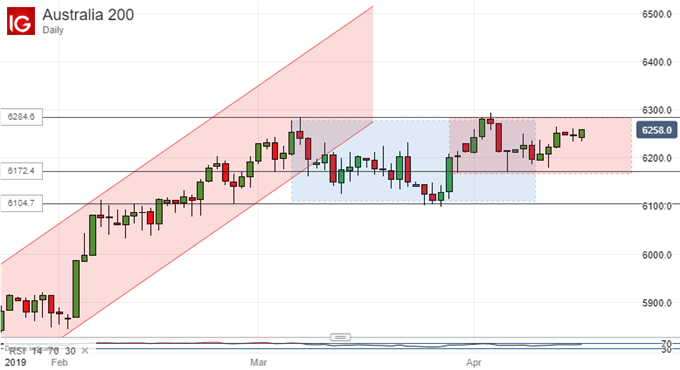 However, the index still looks pretty comfortable quite close to that peak. It has also clearly moved into a higher range overall in the last week or so, with the lower bound now coming in at 6172.4 rather than the 6104. Which held good from mid-February to the end of March.

There’s also a possible but inconclusive suggestion of a pennant formation on the daily chart. 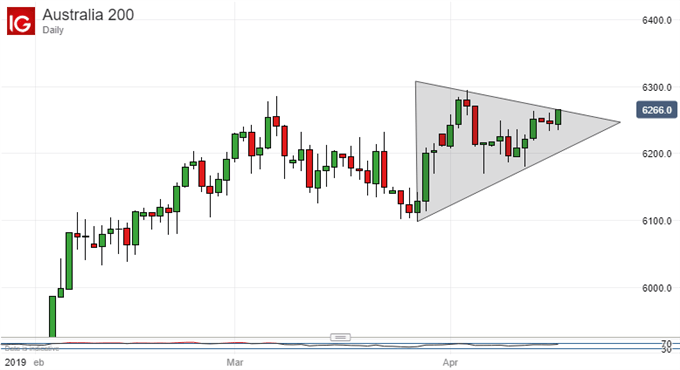 This often-telling confluence of up- and downtrends is usually seen as a ‘continuation pattern.’ What this means is that, once it breaks, the status quo before it began to form will be renewed. In this case, however the immediately preceding period saw a bit of a meander, but it is at least possible that the climb up from the lows of late December will resume.

On the bearish side immediate support comes in at the current range base of 6172.4, with the old base in focus should it break. Fundamental focus is on US corporate earnings at the moment. Disappointing showings from major Wall Street banks have already sent stocks lower in New York this week, but not too much lower.

ASX bulls will probably still have cause to hope as long as the current broad range holds up through earnings season.

However, a break through it will put focus on deeper falls, perhaps toward the 6064.7 mark. That is still only be the first, 23.6% Fibonacci retracement of 2019’s rise though. Things might get more serious below that level with obvious support rather lacking ahead of the second retracement at 5922.5. A probe of that region would obviously entail the surrender of the psychologically crucial 6000 point. That would be serious for the bulls, but it doesn’t appear imminent and, assuming no gross earnings-season shocks, more upside looks entirely possible for the ASX.