This week, Nordic traders will be focusing on the Swedish Krona. On Thursday, the Riksbank will announce its rate decision which will be followed by commentary. Market participants are expecting for the central bank to hold the benchmark rate at -0.25 percent and will be anxiously waiting for the subsequent press conference where officials will provide greater insight on their policy outlook.

Most of the other major event risk will be occurring at the tail-end of this week. In Norway, the economic docket only has two scheduled events, both of which are not likely spark any major price moves. In Sweden, in addition to the rate decision, there will also be retail sales and PPI data on Friday, though their market impact may be eclipsed by the shadow cast by the central bank’s policy announcement.

In Europe, Germany will be releasing key sentiment data which will likely fall short of expectations given the recent downtrend in the country’s economic performance. Nordic traders will be keeping a close eye on the data, especially in light of Riksbank Deputy Governor Martin Floden’s recent concern over the German economy. To understand why, read about EU-Nordic relations here.

On Tuesday, Eurozone consumer confidence will be released. This comes as the region is experiencing a substantial slowdown with political turmoil in weighing on sentiment. In the US, a cascade of economic data will be released containing key indicators that have scope to influence Fed monetary policy. Here is a list of a few key events to watch out for:

Since February, US economic data has been tending to underperform relative to economists’ expectations. The US government shutdown in the first quarter combined with slower global growth weighing on exports has hurt the outlook and kept the Fed on its toes as it stays in a wait-and-see mode. Because of the US Dollar’s title as the world reserve currency, adjustments in Fed monetary policy have a global impact on financial markets.

If the data falls short of expectations, this could induce a bout of risk aversion and end up hurting sentiment-linked currencies like the Swedish Krona and Norwegian Krone. On the other hand, if the data beats forecasts, it could help boost cycle-sensitive assets because of the reassurance it would offer to traders that the world’s biggest economy is still growing.

This could also impact Sweden’s equity market that is on the cusp of what appears to be a pivotal turning point. Year-to-date, the OMXS30 has risen almost 20 percent, but the source of strength is not coming from underlying economic strength. In fact, since November – according to the Citi Group Economic Surprise Index – Sweden’s economy has been tending to perform relative to economists’ expectations.

The OMX’s rise therefore appears to be the result of dovish expectations from the Riksbank rather than foundational economic strength – especially after last week’s dismal unemployment data. A break above resistance with follow-through would perhaps signal confidence in the index’s upward momentum and ability to continue higher.

Conversely, if it touches resistance but closes below it, market participants might perceive this as a lack of confidence in the OMX’s ability to climb higher given the underlying economic conditions. That could then induce selling pressure and cause the index to break below its steep March support with the next possible floor around 1630/20. 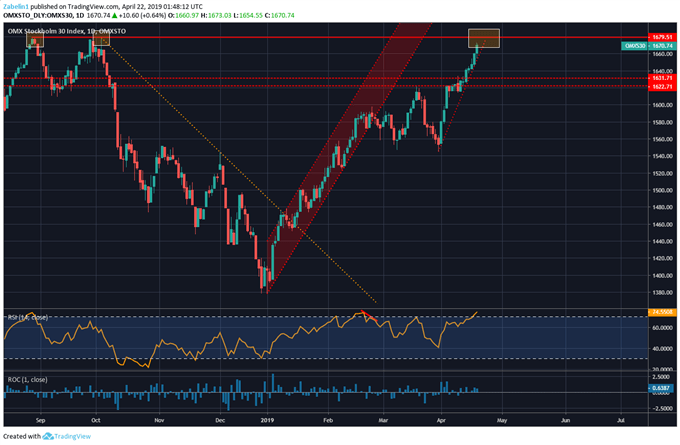