On Tuesday, Brexit-induced risk aversion sent the US Dollar and Japanese Yen higher at the expense of GBP. Greenback-Nordic crosses subsequently spiked and caused USD/SEK to close 0.64 percent higher above critical resistance. The pair is now on its way to re-test a 17-year high not reached since March 7. USD/NOK broke through descending resistance and avoided re-testing the bottom lip of the upward-sloping support channel.

The Swedish Krona and Norwegian Krone will now be eyeing today’s release of key economic indicators from both sides of the Atlantic. In Europe, Germany will be publishing its IFO reports – a measure used to gauge sentiment – which, if in line with broader European growth trends – will likely show weakness. This is a crucial point of concern due to the country’s function as a key growth-node in the region.

Riksbank Deputy Governor Martin Floden has also expressed concern about slower growth in Germany, citing an overall reduced level of European demand as key source of growth for the export-driven Swedish economy. Lately, the Riksbank’s inflation forecasts have been overestimating the actual level of heat in the Nordic economy. Policymakers are intending to raise rates in September, though the current economic outlook suggests a rate hike may not be tenable – at least any time soon.

Want to know more about the outlook for the Sweden’s economy and the Krona? See my weekly fundamental outlook here!

In the US, MBA Mortgage applications are due, with the previous report showing a 3.5 percent contraction. The importance underlying this indicator is rooted in its inflation-inducing nature. Following the acquisition of a home, a series of purchases are made, that when iterated across multiple individuals, creates a strong consumption-driven boost to economic activity.

An uptick in inflationary pressure might then provide greater impetus for the Fed to raise rates which would then impact USD-Nordic crosses. It is worth noting, however, that the central bank has stated that it intends on holding rates through-year end, with the open possibility of a hike or a cut in 2020. The decision would be predicated on the domestic growth conditions and if the economy could endure a state of tightened credit.

The Riksbank rate decision is gradually approaching, with less than 72 hours until the announcement and commentary. SEK traders for this reason may look past some economic indicators due to the sheer magnitude of the upcoming event risk. 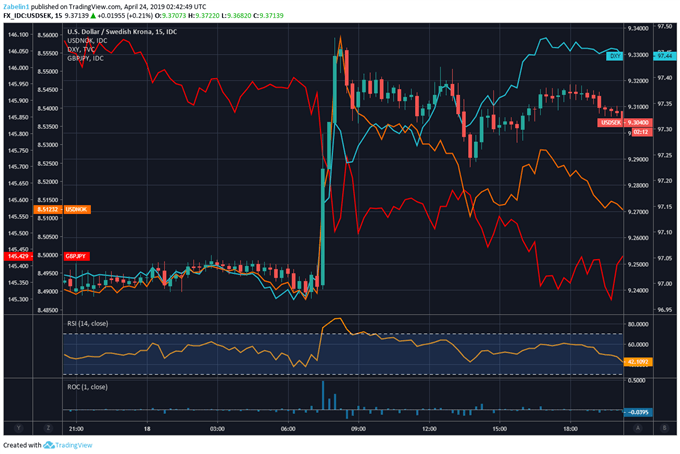