Trade wars are growing increasingly ‘dirty’ as participants run out of conventional tools and are forced deeper and deeper into retaliatory territory. The side effects of the more recent volleys are starting to threaten serious destabilization of overextended risk assets. Through the end of last week, the focus on competitive economic policies shifted to include the US-Mexico escalation. President Trump’s announcement that a 5 percent tax on all Mexican imports would begin on June 10th threw the market for a loop as recent developments seemed to indicate a deal on the USMCA was soon at hand. The USDMXN would obviously respond with a strong bullish break of wedge resistance while North American markets were generally morose owing to the uncertainty. Signs that a reversal in artificial trade barriers is not soon at hand bodes poorly for a market struggling under more normative market developments, such as fading economic activity.

Chart of USDMXN and 2-Day Rate of Change (Daily) 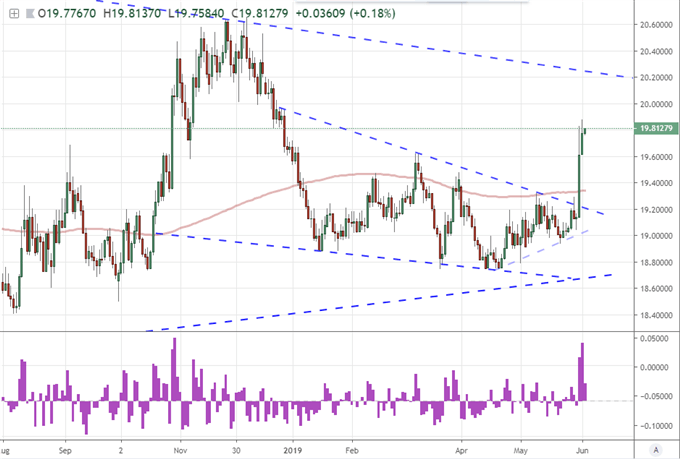 As troubling as the expansion of the global trade war may be, the ‘original’ engagement may still hold the ultimate power to topple resilient speculative conviction. There have not been any increase or expansion of the common tariffs from either the US or China since the hike in the import tax rate from 10 to 25 percent by both parties a few weeks ago. There is still the open-ended threat that the White House is preparing to widen its net to the entirety of China’s shipments to the country, but the sudden course reversal with Mexico suggests that there is good reason to remain vigilant and prepared for the unexpected. In the meantime, the moves against the counterpart’s corporate interests seems to move forward. Though China has not acted out an official response to Huawei’s ban from US business, a white paper on using rare earth materials as a tool and reports that the government is laying out criteria for its ‘unreliable entities’ list that could target large US tech firms tugs at a serious fear for the capital markets.

Ratio of Huawei to Google (Daily) 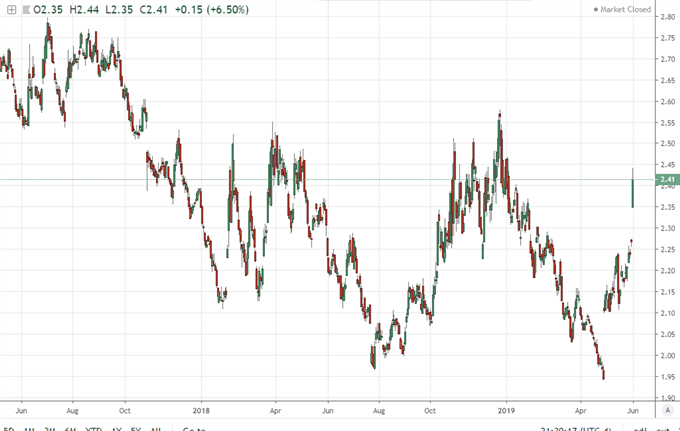 In comparing the performance of various risk assets around the world, it is difficult to avoid the outperformance of US equities relative to global shares, emerging market assets, high-yield fixed income, carry trade and a host of other risk-leaning exposures in different areas of the financial system. Within this pace-setting benchmark, the favorite ‘disrupting’ tech sector has outperformed with the most popular large-market cap firms drawing the reckless speculative reach for return. As equity benchmarks around the world – from VEU to DAX – have deviated from the likes of the S&P 500, the latter has seemed to act as an air break against serious momentum. Even as the loss of altitude seems to encompass virtually all areas of the global markets, still this specific segment’s stability has kept the ship upright. Yet, when the torchbearer has stumbled, peaks of genuine fear have started to leak through. Monday, the tech-heavy Nasdaq paced the tumble – with its relative performance to the blue-chip Dow taking a sharp drop. If reports that the FTC is considering antitrust investigations against key companies Google, Apple and Facebook prove true; mere indigestion could prove a heart attack for ‘risk’. 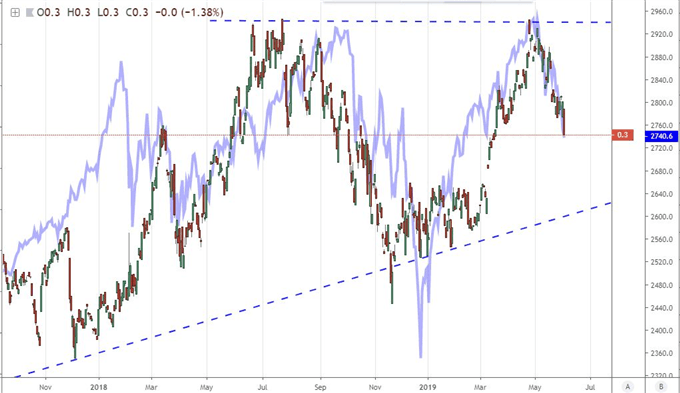 Dollar’s Troubles are the Amalgamation of Economic, Monetary Policy and Systemic Issues

If you follow most of the critical lines back to cross points or even their origination, there is a troubling amount of overlap for the US Dollar. The first trading day of June was a painful one for the Greenback as the EURUSD posted its biggest single-day rally since January 24th. This was not the work of the Euro for once but rather a clear crumpling of the benchmark currency. We can account for this unique influence via an equally-weighted measure of the USD which posted its own sharp drop to combine with Friday’s drop for the worst two-day showing for the currency since the very open of the year. 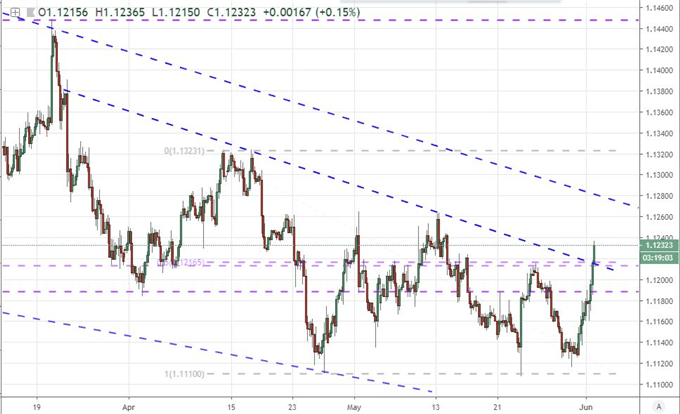 The surprisingly complicated question for this development is what exactly is driving the Dollar’s troubles? There are in fact a host of issues that happen to coincide, but why would this only now prove a burden when previous weeks and months have shown the currency to be aloof to its pains? It may very well be the intensity of the convergent winds. For domestic economic activity, the US economy has already been throwing off signals to reinforce market fears through yield curve inversion; but the manufacturing surveys on tap seemed to carry greater weight in the context of the global struggle. The ISM’s report fell to 52.1 against expectations of a modest improvement (53.0) which was the worst reading since October 2016 but nevertheless still holding in positive territory – a reading above 50. The Markit’s reporting may have been a ‘final’ figure and modest in its shift from the preliminary figure, but 50.5 reading was the worst showing for the world’s largest economy since September 2009. Considering the far more heavily weighted towards the service sector, Wednesday’s ISM non-manufacturing report for last month should be watched very closely. The impact potential is heavily skewed towards a further slide into economic malaise.

A byproduct of the weak economic showing is the growing conviction across the market that a Fed rate hike is inevitable and increasingly essential to forestall a more significant economic backslide. The probability of a rate cut later this month is still only 20 percent, a cut in July is approximately 55 percent and certitude hits with the September meeting where the likelihood is put at 88 percent. A move by year’s end is seen as almost certain and the tally of multiple moves through 2020 is building up quickly. The Fed will start its policy framework discussion Tuesday and a conversation venturing into the diminished effectiveness of policy and the limited capacity to act against future problems is gaining steady traction. 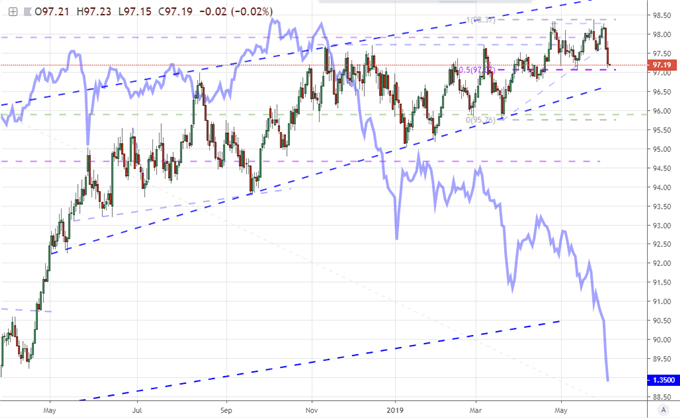 Trouble for the Aussie Dollar, Swiss Franc and Pound Only Adds Strength to Gold

As the world’s most liquid currency sorts out its fundamental role in an increasingly complicated financial landscape, its major counterparts are being swept up in comparatively straightforward currents. For the Euro, the flow of influence has reversed back towards its normal course where the world’s most liquid currency is exerting influence over its second most heavily traded measure. The outflow through EURUSD was strong enough that it would effectively quiet concerns over the region’s economic struggles through the PMIs. Meanwhile, Italian PM Conte stated that he would resign from his position if he could not garner the full support from the parties that form the coalition government. Perhaps that is viewed as a boon to stop the momentum of a united anti-Euro populism. Meanwhile, the Japanese Yen is still riding under the influence of risk trends with an uneven performance that nevertheless pushes USDJPY in the anticipated bearish direction.

From the British Pound, Parliament’s return from recess means its back to the business of sorting Brexit. Of course, before that agreement with European Union leadership can be struck, the UK needs to work out its own position. The betting sites are working overtime on determining who will be the successor of Prime Minister Theresa May when she steps down Friday. Boris Johnson is still ahead in the opinion polls and betting tables. As the negotiation position from the UK still looks in flux, French President Macon has stated for the cameras that no further postponement for a decision beyond October 31st should be considered. Economic health amid this uncertainty is not keeping its steady course. The UK manufacturing activity report from Markit Monday took a significant turn for the worse with a 49.4 reading (versus 52.2) that shows sentiment can have a tangible impact.

When looking for opportunity – or risks – we shouldn’t just keep our attention to the top three or four players in the FX market. The Australian Dollar is arguably the most action packed of the majors this week with the RBA decision expected to deliver a 25-basis point rate hike following the disappointing run of corporate profit, manufacturing activity and housing prices this past session. And, before you develop an itchy trigger finger on this key event, remember a cut is fully priced going into the event and 1Q GDP is due the day after. An even less frequented currency to keep tabs on at the moment is the Swiss Franc. Whether its unique haven properties – outside the fundamental gravity of the US issues – have prompted appeal or the Euro’s spilling over troubles, the EURCHF pulled back from a critical bearish break this past session. Let’s see how long the SNB can keep its boat upright. And, through it all, we have a need for safety that seems to weigh risk assets, call into question the Dollar’s liquidity role and pick apart the host of traditional alternatives to the world’s most liquid currency. Where do we go in such an environment? Gold, which extended its strongest two-day run since October 11th. We discuss all of this and more in today’s Trading Video. 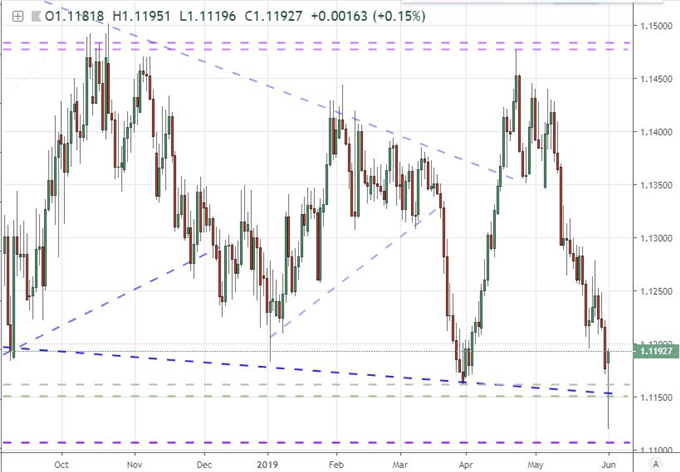