On May 5th, President Trump escalated the trade war tensions between the US and China by pledging to hike tariffs to 25% on $200bln worth of Chinese goods, which sparked a retaliation from China resulting in a breakdown of trade talks. In turn, the Chinese Yuan has dropped nearly 3% with the currency approaching the pivotal 7.00 handle, having traded at its lowest level against the greenback since November 2018 at 6.93. However, as the Yuan edges lower, traders must be wary of intervention from the PBoC, particularly given that the recent rhetoric from the central bank is that they will not let the currency weaken past 7.00.

NOV 2018: Large state-owned Chinese banks had been reported to have sold US Dollars at 6.97 in order to slow the declines in the Yuan.

AUG 2018: In order to stem the decline in the Chinese Yuan, the PBoC announced counter cyclical measures through raising the reserve requirement on FX forwards to 20% for financial insitutions, making it more costly to short Yuan and thus clamp down on traders speculating on Yuan depreciation.

2015-16: Throughout 2015 the PBoC had intervened through draining almost $1tln of its US Dollar reserves in order to stem capital outflows. 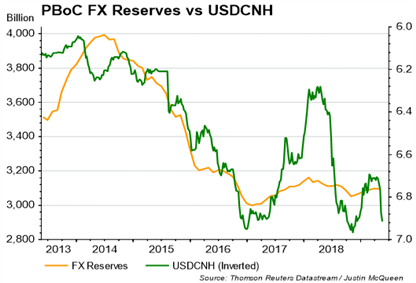 Most Impacted Currencies to the Chinese Yuan (JPY Outperforms)

As concerns rise over the potential depreciation in the Yuan, it is important to know what currencies are most impacted by this. Over the past year, understandedly Asian currencies had been the most negatively impacted by the Yuan, most notably KRW, TWD and SGD, while the safe haven JPY tended to benefit. As such, if there were to be a sizeable drop in the Yuan on a break below the 7.00 handle, we can expect that JPY will outperform strongly relative to KRW, TWD and SGD.

In the G10 complex, typically, the AUD has been most negatively impacted by a drop in the Chinese Yuan, however, as of late, the 1-month correlation shows that the Canadian Dollar has underperfomed. Perhaps explaining the CAD’s inability to pick-up in light of recent strong economic data points. 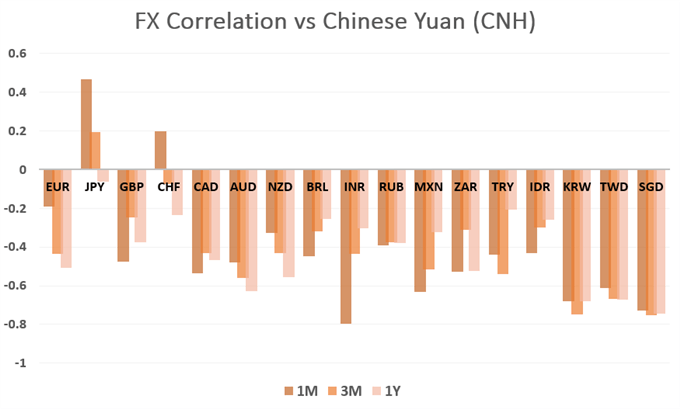 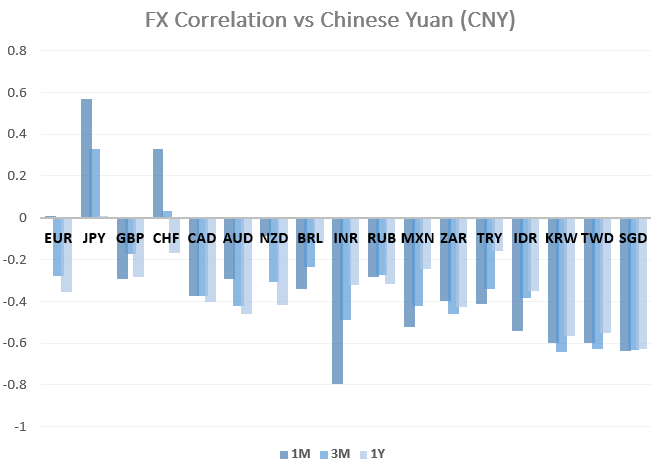 Will the Chinese Yuan Breach 7.00

A way in which China can offset/minimalise the impact of tariffs imposed by the US is via their currency. As such, in order for China to offest a 10% tariff rate on Chinese goods we would assume that an equal 10% depreciation in the Chinese Yuan would be needed. A rate of 6.96 represents a t10% depreciation in the currency from the point at which the tariffs were first implements by the US on March 23rd (USDCNY = 6.32), while 7.90 would be seen as offsetting the 25% tariff rates on Chinese goods. That said, there is a real risk of a breach of the 7.00 handle, if trade wars were to esclate further with a trade deal unlikely to take place in the near-term. 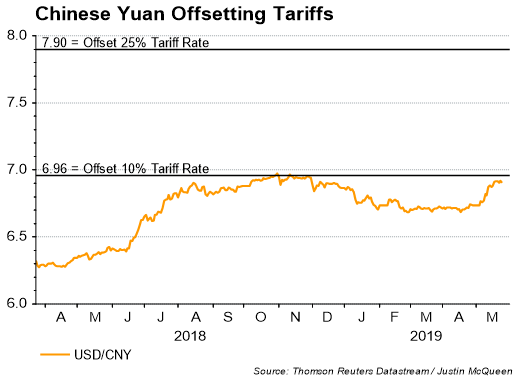 USD/CNH Appreciation Not a Problem for China, Reserves Figures Show

CNH vs CNY: Differences Between the Two Yuan