See the DailyFXQ2 FX forecast to learn what will drive the currency throughout the quarter.

The End of May is Near

As markets continue to price in the risk of a collapse in cross party talks, the Pound is trading at 3-month lows against the greenback (full story). Alongside this, after a poor showing at the local elections, the Conservative Party is expected to face further humiliation in the upcoming EU elections averaging 4th in the opinion polling since the local elections. As such, a weak display will continue to mount the pressure on the Prime Minister to resign. 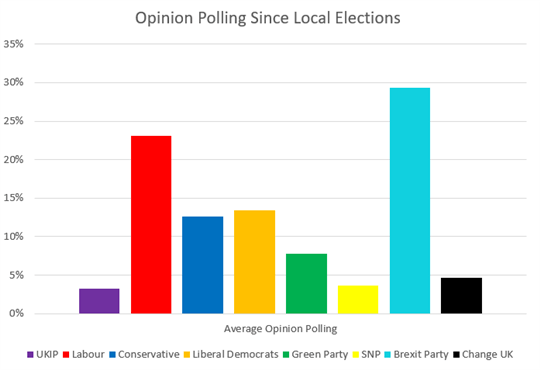 Last Roll of the Dice

Theresa May will attempt for a 4th time to get the withdrawal agreement through parliament on the first week of June, however, unless there is a breakthrough in cross-party talks, which doesn’t appear to be the case the deal looks set to fail once again, which may well see the Prime Minister announce her resignation.

No Confidence Vote in June if Resignation Not Announced

If Theresa May does not succumb to the mounting calls for her to resign it is possible that the PM could face a no confidence vote providing the 1922 Committee changes the party rules to leaderships. As a reminder, last month saw the committee vote 9-7 in not changing the party rules, however, with little progress made on the Brexit front, the committee may change those rules today, which in turn raises the likelihood that Theresa May could face a leadership contest.