Sell in May and Go Away Worked

Following the increased trade tensions between the US and China, equity markets were under notable selling pressure throughout the month with the FTSE MIB the underperformer following a 10% drop. The economic environment has continued to deteriorate in light of the increased uncertainty. However, despite the fact that the global bond market is sending warning signals, another leg lower in equities may need to stem from key global economic data showing signs of a slowdown, particularly from the US.

Weaker global economic activity stemming from the trade war uncertainty has seen markets aggressively price in rate cuts from the Federal Reserve with the 1YR OIS showing roughly 63bps worth of easing (2.5 cuts). In turn, particular attention has been placed Fed Vice Chair Clarida’s recent statement in which he stated that “the Fed are attuned to potential economic risks that could call for more accomodative policy”, which is the first notable statement from a Fed official signalling that the door is open for a rate cut. 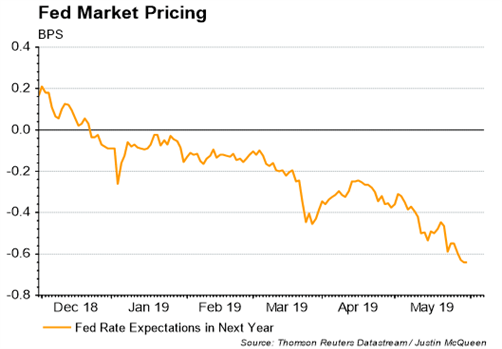 S&P 500 Faces Another Leg Lower on Soft US Data

Next week will see a plethora of tier 1 US data with ISM Mfg. (Mon), ISM Non-Mfg. (Wed) and NFP (Fri) scheduled for release, while Fed Chair Powell is also due to speak. Yet again the S&P 500 has endured another soft week having dropped over 2%, however, for another leg lower eyes will be on for raft of weak US economic data points. As such, focus is on for support at 2720-40 whereby a close below, opens up scope for a 2680 test. On the topside, resistance resides at 2800.

Last week’s softer than expected German CPI poses downside risks to the Eurozone inflation metrics. As such, this will likely embolden the dovish stance from the ECB who are set to announce the details of their TLTRO package. Alongside this, with regard to the monetary policy statement, given the little signs of a recovery in the Euro-Area, the central bank is likely to cite risks to the downside have increased. Key support situated at 11500 following the break below 11800.