After gapping lower at Monday’s open, US equities attempted to recoup early losses. Despite the sobering comments from President Trump over the weekend, US and Chinese officials announced they will still meet in Washington later this week to negotiate. The announcement likely played a role in Monday’s rebound. That said, traders were wary that turbulence in the stock market may not be over. 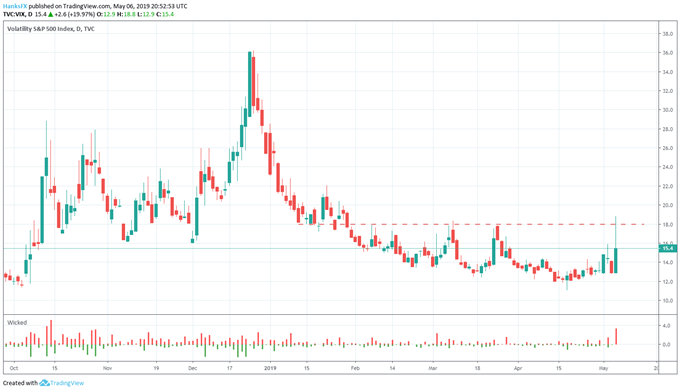 Despite Monday’s comeback, the Chicago Board of Option’s Exchange Volatility Index – or VIX – closed Monday a staggering 19.5% higher than it opened, suggesting traders were wary of more trade talk. To the chagrin of bulls, the next steps in the US-China trade war were outlined shortly after the close by US Trade Representative Robert Lighthizer.

Mr. Lighthizer took to the air announcing plans to implement tariffs on China, lamenting the lack of progress in negotiations. “President Trump would like adeal with substantial structural changes, that is not where we are right now” he said. “We will probably put out a notice on Tuesday about the increase in tariffs to 25% of $200 billion of Chinese goods on Friday” he continued. Following the comments, Apple and Caterpillar slipped to after-market lows – while S&P 500 futures sank to 2,909. 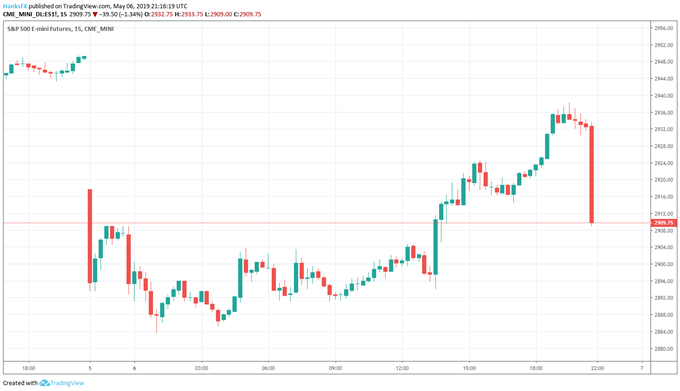 With progress exchanged for escalation, Tuesday trading may offer another bout of volatility which could be more difficult to shake as officials double down on threats. With trade uncertainty abound, traders can look to trade the resulting volatility in stocks. Elsewhere, implied volatility for the Australian Dollar is heightened ahead of a rate decision from the Bank of Australia.