– It was the best day of the year for cryptocurrency markets, and Bitcoin’s best day since December 26, 2017.

– Rumors swirl about potential reasons, but one hasn’t been mentioned – price action in the Turkish Lira.

– The correlation between USDTRY and BTCUSD since the first day of September 2018 is a significant 0.77.

Rumors Abound, but No One Knows the Real Reason

Rumors have swirled about the cause of the rally, with reasons spanning from ridiculous (a fake news story on April Fool’s Day), to improbable (the SEC giving stealth approval to a new ETF without alerting the broader public), to unlikely (Warren Buffet diversifying into crypto), and to simplistic and plausible (stop losses orders kicking in). The truth is, no one really knows.

While all of these reasons may be deemed valid by some and invalid by others, there’s a conspicuous absence of discussion about one of the ‘theories’ that drove Bitcoin’s meteoric rise in 2017: that investors were using cryptocurrency as a vehicle to diversify away from emerging market currencies experiencing excessive volatility (e.g. the South Korean Won during North Korea’s missile tests).

Emerging markets haven’t been in the news much of late, thanks to the intense focus on the latest Brexit negotiations and the US-China trade war talks. But over the weekend, Turkey held local elections, and Turkish President Recep Erdoğan’s ruling party lost control of constituencies in Ankara and Instabul, the country’s two largest industrial cities.

Moreover, with Turkey moving forward with a Russian military contract, the United States has threatened to implement sanctions and to pull parts of its F-35 supply chain out of the country. While any event in isolation may not be cause for concern, “many drops can fill a bucket,” as the saying goes; several minor obstacles appearing at the same time can prove a formidable obstacle. 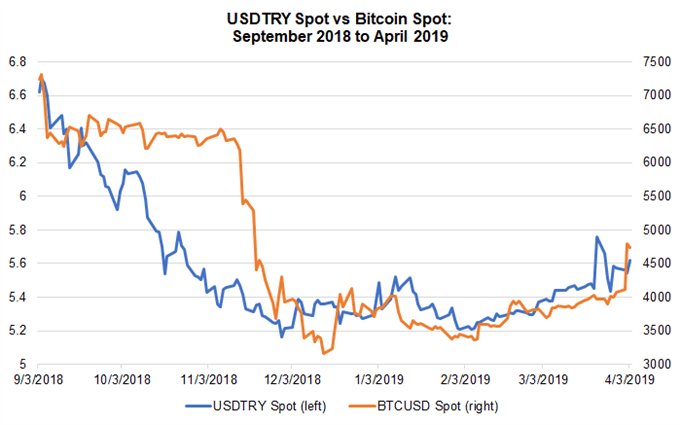 While acknowledging that correlation doesn’t equal causation, it must be pointed out that the recent Bitcoin rally has come on the heels of weakness in the Turkish Lira. But this is not a new phenomenon. In fact, over the past six-months, the correlation between USDTRY and Bitcoin (BTCUSD) spot prices is 0.71. In other words, when the Lira has rallied, Bitcoin has weakened (September to December 2018); when the Lira has depreciated, Bitcoin has strengthened (January to present).

If Bitcoin and the cryptocurrency market is to see a significant boost moving forward, the best hope may be for more weakness in not only the Turkish Lira, but emerging market currencies in general.