The European Parliament elections in the UK were a disaster for both the UK’s mainstream political parties, with voters deserting them in droves for the Brexit Party, the Liberal Democrats, the Greens and other alternatives. That makes the result of the next UK General Election – whenever that might be – a tough call, so traders in Sterling assets need to keep a closer eye than ever on UK politics.

The UK Prime Minister Theresa May, having failed to gain support for her proposed Brexit deal with the EU, announced just before the European elections that she will quit, and her successor as leader of the ruling Conservative Party will become Prime Minister automatically. In the short term, traders should focus on that new head of Government’s policy on Brexit. Longer-term, though, the spotlight will be on whether he or she could beat the Opposition Labour Party’s leader Jeremy Corbyn.

The Conservatives’ method of picking a new leader is complex:

Because of the length of the process, a new Prime Minister will probably not be in place until the end of July, with May remaining in office until then. It’s a process that needs to be monitored closely because the new PM’s Brexit policy will likely affect all UK assets from GBPUSD and EURGBP to the FTSE 100 index of the major London-listed stocks and UK Government bonds, known as Gilts.

In essence, if a Prime Minister is chosen who might lead the country into a no-deal Brexit, GBP will likely fall further than if one is chosen in favor of a deal between the UK and the EU although, as I explained in my article on why Boris Johnson as UK Prime Minister might be good for Sterling, that is not necessarily the case. For now, most of the leading contenders are in favor of a so-called hard Brexit but there are other candidates too – and at least one has warned of a national election before the end of the year.

“Any Prime Minister who promised to leave the EU by a specific date – without the time to renegotiate and pass a new deal – would, in effect, be committing to a General Election the moment Parliament tried to stop it. And trying to deliver no deal through a General Election is not a solution; it is political suicide… and [would] probably put Jeremy Corbyn in No 10 by Christmas.”

Clearly, therefore, traders’ longer-term focus should be on who might win a General Election, with these the leading Conservative candidates and their possible impact on the British Pound. The European Parliament elections in the UK, however, have muddied the waters – showing a major waning of support for both the Conservatives and Labour. Both the Brexit Party and those against Brexit – the Liberal Democrats, the Greens, Change UK and others – gained ground, showing the country as split as ever on whether to leave the EU.

That raises the possibility of no overall winner in a General Election and no solution to the Brexit conundrum – two outcomes likely to both be bad for Sterling.

Much could change before then with Labour, for example, edging towards supporting a second Brexit referendum that might lead to no Brexit at all. However, the slide in GBPUSD both before and immediately after the European Parliament election results were announced on May 26 suggests that traders are overwhelmingly bearish towards the pair. 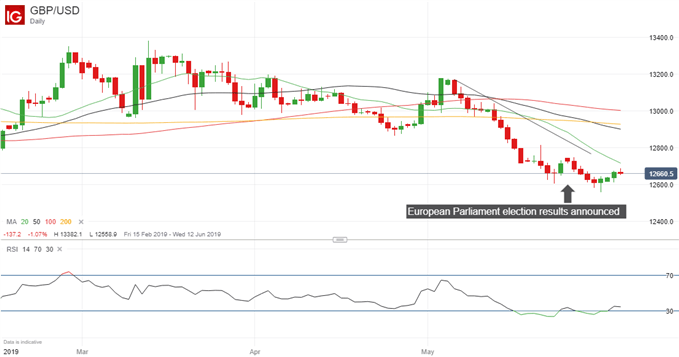 From a contrarian perspective, that might imply that at some point traders should consider buying it. Moreover, as mentioned earlier, a victory for Corbyn might not be as bad for GBP as some analysts fear.

However, the latest opinion polls all put Labour in the lead against the Conservatives, although not by enough seats to rule without forming a coalition with one of the smaller parties, and that could arguably be the worst possible outcome for Sterling, particularly if the Brexit issue has not been resolved by then.

The most recent poll at the time of writing, by Deltapoll for The Mail on Sunday, put Labour on 26%, the Brexit Party on 24%, the Conservatives on 20% and the Liberal Democrats on 16%.

By contrast, the latest betting odds put the Conservatives and Labour neck and neck in the battle for most seats in the House of Commons – underlining how close a General Election might be and therefore how volatile GBP could be in the runup to a Parliamentary election.