You are in luck, DailyFX’s Q1 2019 Crude Oil Forecast was just released

Trump’s tweet wasn’t enough for Crude bears to take over as an eventual unexpected drop in US stockpiles caused traders to hold price above a new-found polarity point near the top of the Ichimoku cloud near $55.60/bbl.

With the burden of proof on the bears, and the US Dollar not seeing the aggressive gains per rate of change that we saw in Q4, the environment seems supportive for further oil gains. As recently argued, traders would likely do best to view the current move higher in relation to the capitulation in December. Crude traded to a near-3 standard deviation move of the 12-month average, with the 12-month average at $63.45/bbl as some of December’s weak data points that caused concern has reverted higher, and Saudi Arabia production cuts add to further support under the price as evidenced by future’s spread.

Crude Futures Bring Buyers Back As Backwardation Is, Well, Back 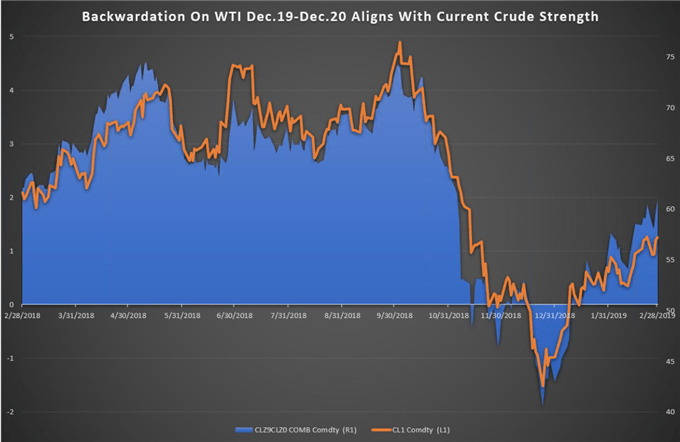 Backwardation is a development in the futures curve where near-dated contracts of a homogenous market (like crude) trade a premium to later-dated contracts. Seemingly, the premium happens for a hand full of reasons (typically a perceived shortage relative to demand), but regardless of the reason, traders who buy out make money when rolling the contract to the next date if backwardation remains, which encourages buyers into the market, and tends to act as a support floor for price.

What’s the Risk to my Bullish Thesis?

When traders look to the crude oil price chart, they will likely begin to association two levels of support that should hold if the bullish these is to remain.

First, the February low, at $51.53/bbl, which happened to be the top of the Ichimoku cloud at the time relative to price, and $55.14/bbl that was last week’s low and the top of the current Ichimoku cloud pushed forward 26-periods. The former looks to be the pivot back to an impulsive rise whereas the later looks to be a new polarity point in the oil market as it acted as early month resistance and may now show as support.

Either way, traders would have a hard time selling crude while holding above a polarity point, the 9- and 26-period midpoint as well as the backwardation of the December 2019-December 2020 spread widening.

Follow the DailyFX Podcasts on A Platform That Suits You

Tyler Yell is a Chartered Market Technician. Tyler provides Technical analysis that is powered by fundamental factors on key markets as well as trading educational resources. Read more of Tyler’s Technical reports via his bio page.

Communicate with Tyler and have your shout below by posting in the comments area. Feel free to include your market views as well.