The UK economy grew by 0.2% month/month in February, with the latest monthly data showing GDP growth above the expected 0.0% but below the previous month’s 0.5%. That lifted year/year growth to 2.0% from an upwardly revised 1.5%. The three-month/three month growth rate was a same-again 0.3%

The data suggest that Brexit uncertainty is weighing only mildly on UK GDP but, for GBP traders, the principal driver of GBP prices near-term will be the outcome of talks today between the UK and the EU on a possible Brexit extension.

At today’s Summit, the key question is whether the EU will grant the UK a Brexit delay and, if so, for how long. UK Prime Minister Theresa May will seek an extension to June 30 but the EU is expected to insist on a longer delay, perhaps to the year-end or even next Spring.

In the political jargon, a “flextension” – where the leaving date depends on circumstances – is also possible, probably with conditions attached. As talks between May and Opposition leader Jeremy Corbyn are still showing few signs of progress, the EU will likely question whether a short delay will serve any purpose unless a way can be found in the UK to exit the Brexit maze. 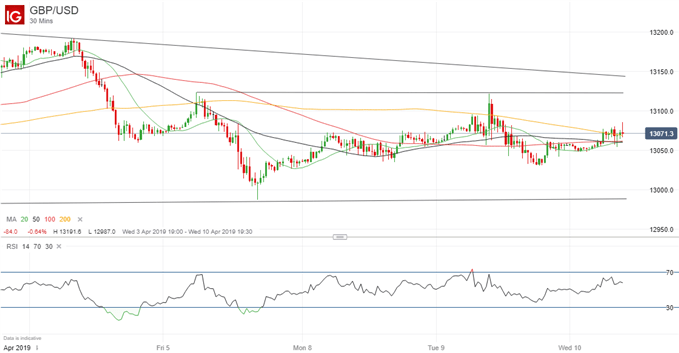 For GBP traders, the key question is whether GBPUSD will break out from its recent narrow trading range between just under 1.30 and just above 1.31 but for now there is little sign of a strong move one way or the other.

As for the latest UK economic data, that also showed better-than-expected increases in industrial production, manufacturing output and construction. However, the deficit on trade in goods was worse than economists had predicted.

The GDP growth rate was the highest year/year since November 2017, perhaps due to pre-Brexit stockpiling.