You can access all of our Q1 2019 Trading Forecasts for a wide range of Currencies and Commodities, including GBPUSD along with our latest fundamental and medium-term term technical outlook.

The British Pound is being whipped around by talk that PM May may downgrade tomorrow’s meaningful vote on her Brexit bill to provisional status as fears grow that she will face another defeat. If this is the case, it is likely that some Conservative MPs will resign and may even force a second vote of No Confidence in the Prime Minister. As we write, nothing has been confirmed one way or the other so price action is likely to remain whippy ahead of the vote. PM May has until 10pm today to table any motion or amendment.

The UK calendar is busy on Tuesday with industrial and manufacturing data released, while cable traders will need to be alert to a raft of high importance US releases. On Wednesday, Chancellor Philip Hammond will present his Spring Statement with fresh spending planned if Brexit is resolved.

GBPUSD has already moved in a 100-pip range today as rumors swirl and the latest GBP one-week volatility data shows a potential for the British Pound to move 210 pips this week. GBPUSD looks reasonably well supported between 1.2894 and 1.2964, while to the upside resistance at 1.3177 should prove difficult to break until Brexit is resolved. 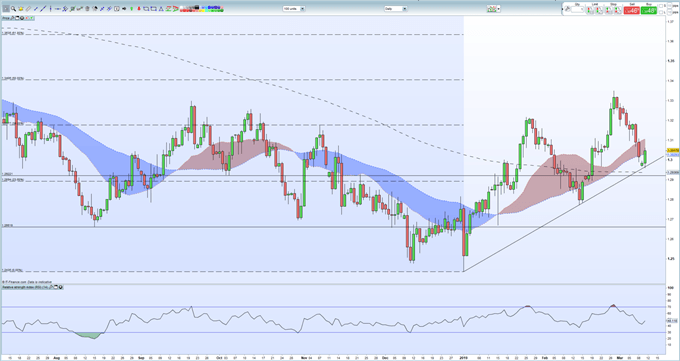