Apparent trade deadlock between China and the US overrode all else in Asian market trade Monday.

This month started with strong and widespread optimism that some sort of settlement was likely between the two global titans before its end. Those hopes seem to have foundered, if not completely sunk. White House Economic Adviser Larry Kudlow said in a Sunday television interview that China would need to build ‘very strong’ legal enforcement provisions into any eventual deal and said that the current sticking point was Beijing’s reluctance to write measures already agreed into law. For its part China maintained a defiant tone, with a People’s Daily commentary on Monday referring to the US position as ‘bitter fruit’ which would harm Chinese interests.

Kudlow said that there was a strong possibility that Donald Trump and Xi Jinping would meet bilaterally at the upcoming Group of 20 meeting in Osaka in late June, which may offer a crumb of hope. Asia Pacific stock markets saw little enough, though, as a new week got under way. The Nikkei 225 was down 0.6%, with Softbank shares weighing especially. Shanghai’s mainboard shed 1% and the ASX lost 0.2%. Hong Kong’s Hang Seng was out of action for a holiday.

Foreign exchange markets behaved predictably, with the anti-risk Japanese Yen in vogue at the expense of things like the Yuan and the Australian Dollar. The US Dollar was broadly flat, however, against a basket of its major traded rivals. AUD/USD’s long downtrend has accelerated despite its central bank’s surprising refusal to cut interest rates last week. 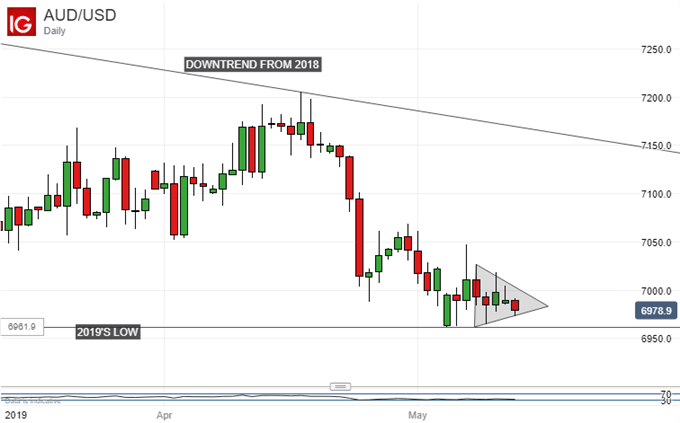 The pair remains above its low point for this year but the tentative formation of a pennant pattern on its daily chart suggests that its downtrend could well resume shortly, almost inevitably taking it on to new lows.